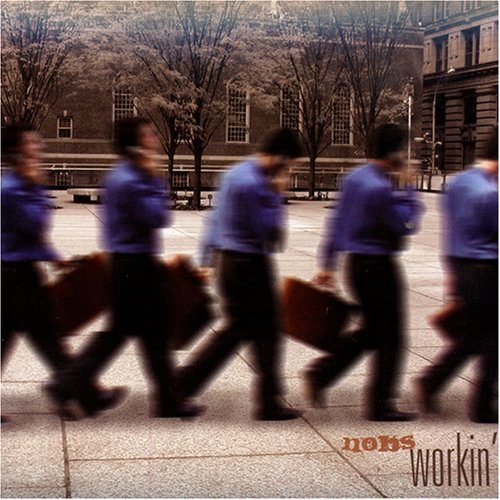 Most rap artists want to be successful. Some attempt to emulate popular trends or sound “industry;” others are honest talents, using truth to make their break; while still others are social abolitionist, who believe their proverbial verses will change the world. But very rarely do you see someone who is as openly anti-industry as our dear Nobs. He follows up last year’s satirical derision, “Typical Hip Hop Shit,” with “Workin’,” another loosely thrown, sucker punch at the industry that made him.

Congruent to his past releases, “Workin'” is abstract as ever. It’s full of incoherent symbology, such as the political subtext in “I Sing Happy Birthday With Grenades in my Mouth,” or the confused commentary on commercialism in “Go Drown.” From time to time you get a hint as to what the meaning is behind his curtain of figurative language. But the majority of the album you find yourself asking “what the hell is he talking about?” The best moments come when he manages to quell his A.D.D tendencies and focus on lyrically communicating his message to the audience. “The Lottery” is effective in balancing his poetic aesthetics with a consistent gambling conceit. He succeeds with “Radio” as well, a vehement attack of the standardized radio hit. Ironically, “Radio” is being promoted as the album’s hit.

Nobs’s abstract lyrical efforts are redeemed by his classical production skills. He uses steady, jazzy drumbeats and varied sampling to blend the album together quite cohesively. Production grants the album an important sense of foundation. Especially important to Nobs’s more muddled poetic pieces, such as “Go Drown,” where the breakneck drumbeat and congested trumpet let you forget you don’t know what he’s saying.

It’s so hard to work the abstract rapper angle, especially in such a conformed market. Some artists are too didactic, others are too preachy, and some are just so out there they orbit their own consciousness. It almost takes twice as much effort and creative focus to pull off an abstract album. But when you do, it’s eternally beautiful. Cee-lo seems to have a knack for it, as does his Dungeon Family brethren Outkast. But Nobs will have to work a little harder than “Workin'” to garner the underground’s respect or reach the public eye.