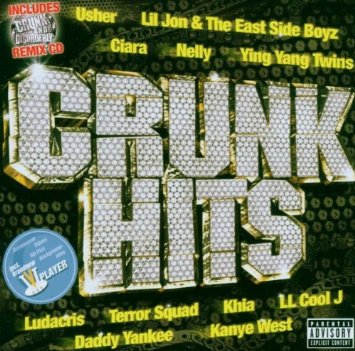 Crunk music has been a staple in the southern cities of Memphis and Atlanta since at least the mid-nineties. The first “crunk” artists to break through nationwide came in late 1999/2000 when Drama and Miracle both had hits garner radio play. Since that time, the term has taken a life of its own and now is used to refer to almost anything southern. While original crunk music was more akin to Miami bass, today’s crunk is simply a term used for bass-heavy music usually accompanied by synths. Lil’ Jon has proclaimed himself the king of the current crunk movement and crunk music is usually either produced by him or mimics his production. So right off the bat, fans of real crunk music will be sorely disappointed by almost all the tracks on this compilation. Even fans of Lil’ Jon’s brand of crunk will probably be scratching their heads at about half of the tracks featured on this compilation. “Crunk Hits” is really just a collection of club hits not from NY or Cali. Taken in that context, the compilation does its job admirably as the 18 tracks packed into this CD are sure to get any party “crunk.”

Lil’ Jon makes countless appearances on “Crunk Hits,” rightfully so since TVT is the home of his group and record label. From his own “Get Low,” to Ciara’s “Goodies,” Ying Yang Twins’ “Salt Shaker,” Usher’s “Yeah,” and Youngbloodz’s “Damn!,” most of Lil’ Jon’s hits from 2004 are here. The only glaring omission would probably be Petey Pablo’s “Freek-A-Leek,” which probably couldn’t get cleared by the label. But this collection of hits brings up the first problem with this compilation, it’s dated. While all the songs included were hits during their time, the latest song would probably be Nelly’s “Na-Nana-Na,” which made a splash in early 2005. Songs like Khia’s “My Neck, My Back” and T.I.’s “Rubberband Man” go back to 2003. Nothing from Lil Jon’s latest album makes the cut, nor does anything from Lil’ Scrappy or Trillville. It could be that TVT wanted to make sure these “hits” got to the public before those from 2005, but it would have been better to put out this particular collection earlier in the year.

The rest of the tracks featured on “Crunk Hits” prove that the term “crunk” is used only for effect and does not mean to convey any authenticity. Chingy’s “Right Thurr” and Nelly’s “Na-Nana-Na” have as much in common with true crunk music as did 50 Cent’s “In Da Club.” Lil’ Flip’s “Game Over” is also far removed from anything crunk in style and in region. Juvenile’s smoothed out “Slow Motion” also defies the term crunk even in its name. Other suspect cuts include Khia’s “My Neck, My Back” and Jackie-O’s “Nookie,” both of which feature lewd sex anthems over more subdued beats. Both tracks tore up the club circuit in their day, but none exhibit anything you’d consider crunk. Even artists with “crunk” material are featured on their less than crunk tracks. Thankful as I am for Killer Mike appearing on this compilation at all, the playful “A.D.I.D.A.S.” should have probably been passed over for the much more crunk “Akshon!.” Pastor Troy’s “Are We Cuttin,” while a banging track thanks to Timberland’s beat, is nothing compared to his earlier work on real crunk tracks like “We Ready” and “No Mo Play.” The only track that comes close to true crunk on this CD is Three 6 Mafia’s “Ridin’ Spinners.” The Mafia’s call and response “Buck” music is a direct descendant of true crunk music and the tracks bouncy sound captures more of what was once crunk than anything else on this CD.

Despite all the criticism I’ve spewed out so far, “Crunk Hits” is actually not a bad CD at all. For what it is, it’s actually an outstanding collection of hit songs from 2004 that are sure to please any casual rap fan or hardcore fan that doesn’t have the dough or time to peep every release. It’s sure to get any party “crunk” and also is good music if you like a boost of energy when you drive. All the tracks on this CD should be familiar to you, except possibly Pitbull’s “Toma,” and should appease your need for hype, energetic music. Consider it the “Source Hits” of the south without the annoying and bad Benzino tracks attached at the end.