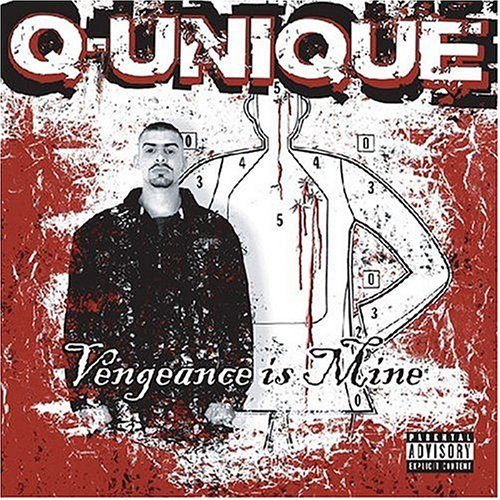 “Y’all ain’t know I was nice with the MPC-2000?
Who the FUCK you think produced both of those Arsonists albums?” – “The Resume”

Just in case you didn’t know, or you knew and just happened to forget, Q-Unique opens his “Vengeance Is Mine” album with a little primer on his role in hip-hop. Indeed, his production work on “As the World Burns” and “Date of Birth” would be reason enough to give the man his props, but he’s also mad ill lyrically. Q is filled with enough Puerto Rican pride to carry the whole island on his shoulders, but that’s not what makes him Unique; in fact that pride can be found throughout hip-hop for the last 25 years and informs every aspect of the culture from b-boying to burners to beatboxing and more. What does make Q-Unique though is his combination of vocal delivery with in-your-face snaps and punchlines. He may not get the recognition for it that the slower flowing “Polo Rican” Thirstin Howl III gets, but with “Vengeance Is Mine” that’s all about to change.

Production on this 50 minute album is an all-star selection of East coast beatmakers. JuJu from the Beatnuts laces “Diamond in the Ruff” and “Me, That’s Who.” Necro is on point with “The Set Up,” “The Ugly Place,” “Canarsie Artie’s Revenge” and “Father’s Day” among others. Phase One handles “H to the C”, Context blesses “One Shot,” S Groove shines on “Nature of the Beast” and Q-Unique handles most of the rest of his album. Basically speaking, this is a high quality audio venture from start to finish. With so many sharp tracks, Q-Unique becomes the difference maker on turning songs from warm to blazing hot, as he does with rhymes on “One Shot” that will leave you burning for more:

“Top of the world ma, watch me make this climb
I’m locked in the grind and I ain’t stoppin ’til it’s mine
I earn paper with breath control and a sampler
cause my son doesn’t take no for an answer
Labels jerk me off so much
the CEO’s got hairy palms, are blind, and need braille to touch
What the FUCK?
[..]
It went from 13 to 3 and it hurts me to see
but that’s the game, I don’t take it personally
Never knew we’d split, my teammates was losin it
You know, that VH-1 ‘Behind the Music’ shit
Broken home, broken-hearted, life put me
at the end of the story and said ‘homey get it started’
God wastes time like free minutes on cell phones
About to move stock once that Wall Street bell tones
and walk tall like Divac, lock it like C-block
Ignorant that’s me not I’m climbin ’til I see top”

It’s no surprise that Q-Unique would use his solo album to address the disintegration of the Arsonists, but regardless of whom or what Q’s still got that fire that burns slow and leaves indelible impressions on listeners. He’s not hating at all though – in fact former partner Swel 79 shows up on “H to the C.” Guest spots are largely from the Non Phixion family though, which isn’t surprising since the album’s on Uncle Howie Records and Ill Bill executive produced the disc. On the whole though cameos comprise just three tracks, which gives Q-Unique plenty of space to dominate this short but very intense album. He’s not just spitting to be witty though – on tracks like “Father’s Day” he gets deep with it:

“Sitting in the room with a knife in my hand
With the plan all night to take the life of a man
A soul with a dark heart and the devil in his eyes
Provider and father figure, high level of disguise
He had the neighborhood fooled with his fatherly act
They didn’t know how he left us in the poverty trap
Didn’t know his angry fists went across mommy’s face
or his two-timing ways left my mother a disgrace
No one knew how he instilled fear into his family
His temper angered rage was damn near insanity
Tragically it came to this; but it’s either him
or the blade cut across my vein that would drain my wrist”

Q-Unique is one of those veterans of the music industry who gets referred to as a “rapper’s type rapper.” He’s not ever going to be the biggest name with the biggest budget, he’s probably not ever going to go platinum, and you might see a blue moon more often than you’d see a music video from him on BET or MTV. Q doesn’t give a fuck about that shit though – he just wants to spit verbals and make good music. While the fire that burns in Q may make him want to take vengeance out on the world, it’s certainly not the listener who suffers. “Vengeance Is Mine” is the type of shit you’ll want to hear when pop rap is too saccharin and underground MC’s just aren’t grimy or skilled enough. Q can flip an MPC, or he can flip AS an MC, but either way he flips shit like the Poopsmith.