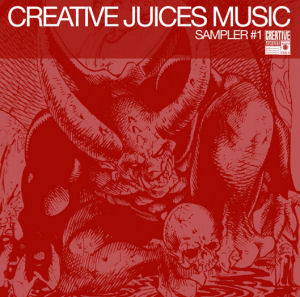 Avoiding cliched phrases like “up-and-coming” when describing artists or record labels should be the #1 goal of every aspiring album reviewer. Unfortunately that also makes an opening paragraph for an album like “Creative Juices Music Sampler #1” exceedingly difficult. Let’s start with the facts instead: the label has existed sine the early 2000’s, has featured a variety of well-known rap artists on its releases (Killah Priest, Jeru the Damaja, Necro and Casual to name a few) and is currently home to Jise (of The Arsonists fame), Nems (MTV Fight Klub champion), producer/rapper IDE and many more acts. Their profile is pretty good for an independent record label, and their hustle has to be respected given how many indies have folded in the last decade. Creative Juices Music seems to be solid in the 21st century, and as such can afford to make an album like “Creative Juices Music Sampler #1” an exclusive available only through their website.

Now as for those cliches, the temptation to use them when listening to an album like “Creative Juices Music Sampler #1” is exceedingly strong. Going through twenty-two tracks of CJM’s best works, it’s easy to respect the talent and passion of these artists, even while simultaneously realizing that CJM’s music may be best served to a CMJ (College Music Journal) audience. Back before MTV split off all their hip-hop coverage to a sub-channel and lumped it into a single day called “Sucker Free Sunday” some of these artists might have had a chance at mainstream exposure, but these days you’d be lucky to find hip-hop let alone any music videos on that channel. Mainstream radio? Forget it. They’re far more interested in Katy Perry, Lady Gaga and Justin Bieber. With a little luck Alucard and IDE might get some blog love from Chairman Mao or Kevin Nottingham, but that’s about as good as it gets. The rappers, artists and producers featured here want to do uncompromising authentic hip-hop and while not to be faulted for it there is a price to pay that can only be described with cliches like “ruggedly underground” or “independent as fuck.” College radio DJ’s will spin this shit more than anybody else.

That said there are specific tracks on this lengthy and in-depth Creative Juices sampler that stand out even among their own relatively high standards of creativity. Reef the Lost Cauze makes an excellent cameo appearance over the hard hitting and speedy piano bars of IDE’s “Omniscient.” Critical’s “Iron Horse” is that electric keyboard circus music backdrop perfect for emcees to drop bars on, so Savage Messiah and Thirstin Howl III join in on the fun. Jise’s “Shovels” featuring Shotty has some of the best headnodding bass and drums of the entire disc and finishes strong in the final 45 seconds with dope turntablism that makes you wish the song was a minute or two longer. Fellow Arsonists alumni Q-Unique joins Jise on the slow tempo guitars of “Hitman’s Code” along with Duerte, spitting flows that challenge the speed of the backdrop. The all-star “My Soldiers” features Casual, IDE, Skavanger, Steele (Smif-N-Wessun) and U.G. all together on one hot banger, and it’s not the only track where IDE & Skavanger team together and invite guests: Shabaam Sahdeeq raps on “Deep Thought” and Hell Razah joins in on “God Complex.”

Considering this album isn’t available in conventional retail outlets it’s a little tough to rate it based on whether or not you’d want to purchase it – you have to go direct through the label if you desire it that badly. In truth this kind of album is much more for the reviewer than the public and that’s a shame really, because “Sampler #1” shows the strength and diversity of the CJM roster not to mention their ability to pull in top level hip-hop talents to combine and collab’ with. Conversely it would be a hard sell at major chains simply because there are dozens of compilation albums in store racks already and most don’t sell that well, and very few are high profile enough to get an end cap display or be featured in the weekly ads. CJM is in that somewhat awkward position where they’re too big to be small yet too small to be big, a point at which many similar labels cashed in their chips and said “fuck it” to the industry as a whole. Here’s hoping Creative Juices continues to have the staying power it’s already shown and the ability to ride it out without the mainstream because samplers like these show they have a lot to offer hip-hop.