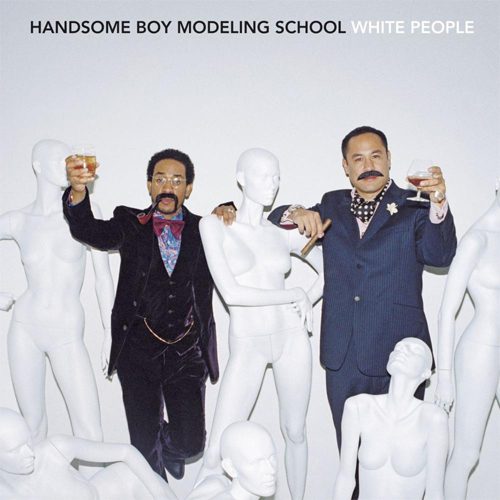 Arguably the most celebrated of Dan ‘The Automator’ Nakamura’s quirky, impossibly bizarre projects, Handsome Boy Modeling School (his project featuring the immortal Prince Paul, for you uncouth neanderthals who still don’t have a clue) never ceases to have hipsters and rap nerds alike up in arms every time they announce a new outing. While all of Dan’s artistic endeavours throughout the past year have been extremely palatable (New Orleans acid jazz outfit Galactic, Australian songsmith Ben Lee, the Primal Scream-ish stylings of Head Automatica with Darryl of Glassjaw, Lovage), each one merely felt like an aperitif, merely existing to whet my appetite for this gargantuan effort. The mere prospect of two of the greatest producers of our time flexing their musical brawn with assistance from some of music’s most obscure geniuses should be sufficient to cream the pants of any drivelling music enthusiast. A look at the tracklist yielded an emphatic coo from yours truly, an illustrious who’s-who of names spanning indie, metal, rap and even AOR/MOR circles, and to say I was excited would be a disgusting understatement- the words “rabid,” “slobbering” and “maniacal” would be far more apt.

Truly, kudos needs to be given to these two men for assembling the guestlist- one that is certainly not short of formidable names, but one that more often than not shrewdly avoids choices that are too obvious. While nods to en vogue acts like Linkin Park, Jack Johnson and Alex Kapranos of Franz Ferdinand surface, so do completely leftfield selections like Lord Finesse, John Oates, Jamie Cullum, Cat Power (!!!!), Mars Volta and most bizarrely, Dres of Black Sheep. Toeing that tightrope between trendhumping and scenesterism, the tracklist alone reeks of genius, clear proof of Dan’s intimate knowledge and appreciation for music in all its eclectic incarnations. With their previous effort offering such mindbending excursions as the Julian Lennon/Shonen Knife downtempo collaboration “Sunshine,” I expected more of the same mad sonic alchemy on “White People.”

Blame it on my own youthful exuberance, that feverish clamour that should’ve been extinguished by critical jadedness years ago, that blind faith that leads me to place ungodly expectations on the shoulders of my favourite artists. With Royal Flush, Lord Have Mercy, Fabolous, Pete Rock, Jadakiss, Prince Po, Kool Keith, Atmosphere and Q-Unique all breaking my fragile heart this year, you would have assumed that I would’ve grown averse to having such lofty expectations. Alas, once again I feel underwhelmed, condemning my own folly as I toss this limp disc on the “Full Circle,” “Immobilarity” and “Beneath The Surface” pile.

While “White People” certainly shows no lack of adventure, after all Dan has fashioned a career from hyperactive, restless experimentation, one is ultimately left wishing that Dan and Paul toned the wackiness down a few knobs this time around. To be truthful, it starts off with tremendous promise – while not quite as whiplash-inducing as “The PJs,” De La’s outing on this record, “If It Wasn’t For You” is pleasing enough, its kitschy ’50s sounding track bearing Paul’s distinctly irreverent thumbprint (Paul, get back with De La, PLEASE!). Here is where it all cascades downwards – the track that I set the highest expectations for. There is absolutely no doubt in my mind that Mike Patton is the finest vocalist modern music has ever seen, his cranium warping forays with Faith No More, Mr Bungle and Tomahawk forming the blueprint for my own artistic output. While strangers to Patton might find “Are You Down With It” perfectly harmless, benign, even ENJOYABLE, I can’t help but gasp when it crawls indolently out of my speakers, sounding like a Lovage outtake with none of the no-holds-barred, raucous audacity of Mike’s mutant beatbox style.

With my unwavering affinity for Mike Patton out the way now, let’s get into more gripes. “The World’s Gone Mad,” featuring a lineup that could only be borne from Dan’s manic imagination (Del, Barrington Levy and Alex Kapranos), boasts gently plucked strings, a subdued tempo and warm, honest feel that proves a formidable platform for Barrington’s forceful wail and Del’s perpetually off-kilter delivery. While the track would’ve been perfectly tolerable as an inclusion on the Gorillaz record as a solo joint by either Del or Barrington, the two sound awkward and incongruent on this track, Barrington’s raw, emotive howl stifled by slothful, indifferent verses by The Funkee Homosapien. “Rock And Roll (Could Never Hip-Hop Like This) Part 2” is a mere husk of its original, shifting from sounding like a Ninja Tune record into a Linkin Park Re:Animation cut into a a Dr Octagonish cut back into Re:Animation tripe, drowning in pseudo-dramatic synth-rock bloatedness and Chester Bennington’s whiney drawl. Not even Lord Finesse’s astounding verse and Q-Bert’s intergalactic funk can save the track from sinking in pomp and confusion. On the following “The Hours,” Chino Moreno of the Deftones (my second favourite vocalist of all time) finds his chilling, Robert Smith and Simon Lebon on speed outbursts blunted by the eternally-irritating obnoxiousness of Cage and fellow geek rap beatnik El-P. I can’t even begin to get into how out of place Cedric Bixler of the Mars Volta is on the RZA track, appropriating his pseudo-Geddy Lee theatrics for a trip-hop medium, or the quaint, but disposable collaboration of John Oates and Jamie Cullum on “Greatest Mistake,” which sounds like the wackest track Phoenix never made.

That’s not to say that this album should be overlooked, of course – this is, after all, the work of two veritable geniuses, maestros with more musical knowhow and vision than most of us could ever hope to imagine. Clearly, there are soaring high points – “Breakdown” with dorm pinup boy Jack Johnson, while perfectly harmless and radio sanitary, is impeccable, breezy pop music that approaches the stratospheric heights of “Sunshine,” Jack’s everyman croon subtly caressing sultry percussion and slinky keys. Chan Marshall, an artist who can do absolutely no wrong to begin with, injects her signature jet-black soul into the sparse, minimal bassline of “I’ve Been Thinking,” her sneering refrain of “Be my boy” sure to strike a chord among her devoted fanbase. The similarly subdued “Class System,” an ultra-sexy noir lounge-pop number featuring Julee Cruise and flavour-of-the-month Pharrell Williams, boasts an absolutely stunning piano riff as the backdrop for Julee’s shrill, conviction-soaked cries. While I could do with a lot less Pharrell (does this dude sing the same 10 notes on every damn song or what?) , this track is an absolute winner, its maudlin charm shining beneath the sombre, grippingly dark heart of the composition. Thankfully, the album’s true saving grace is a rap number – atop a droning, bass clef piano line and percolating, almost garage drum pattern, Dres once again proves why he is one of the most underrated emcees of our time. The progressive track is PERFECT fodder for Dres’ forward-looking, left-of-center approach. Yet herein lies another critical flaw in the armor of “White People” – the endeavour to achieve a more sleek, stylish sound will invariably lead many to miss the verbal pyrotechnics of Zion I, J-Live and Encore, whose offerings on the debut platter affirmed Dan and Paul’s hyper-futuristic vision in ways that these sanitised pop dittys cannot.

Once again, let me allow to emphasize my insistence that you buy this record, if only to support Dan and Paul’s insane wizardry. There are a handful of absolutely terrific tracks that deserve to be savoured on headphones with a bowlful of lollipops in hand and a ridiculous grin plastered on your face. To new advocates of the Modeling School , this might be a musical revelation that will inspire you to pursue all of Dan’s other work. If “Breakdown” is what it takes to incite such a revolution, I’m all for it. However, please allow me, for my own selfish purposes, to indulge in more whiney rhetoricâ€¦YOU COULD HAVE DONE BETTER, SIRS!