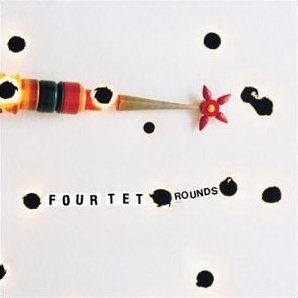 While not a hip-hop album per se, this record is grounded in and informed by the music, and hell, if RJD2, Diplo and Blockhead are getting ink in all the major rap publications nowadays, why shouldn’t Four Tet and Manitoba? Truth be told, this record references the beloved rap beat enough to earn a spot in your local record store’s Hip-Hop section- the drums are pushed all the way to the forefront of the mix, the low end is thick and thunderous and the rhythms never tend to stray far from headnod tempos. Yet, this is so much more- this record is pop for the new millennium, a meticulously orchestrated melange of samples that have been lovingly cut-and-pasted together to form an intricate symphony of immense beauty and majesty.

“Hands” opens with a fumbling torrent of clumsy drum samples, all toppling over each other in a sloppy fashion as a heartbeat pulses incessantly in the backdrop. Keys whisper faintly in the distance, ushering in a deliberate trip-hop beat, one which attempts to assert some order into the haphazard proceedings, a bizarre juxtaposition to the random drum patterns that continue to struggle for prominence in the convoluted mix. “She Moves She” appears to approach the listener with a far more conventional approach- a thudding kick drum paves the way for subtle guitar plucks and shimmering bells, only to have its linearity disrupted by a coarse, awkward beep, one which obscenely interrupts the burgeoning melodicism with its callous obnoxiousness. Yet, when the beep fades and is reintroduced, the ethereal melody appears to coalesce with its snotty intruder- these disparate elements no longer seem like a slipshod collage of incongruous sounds, and merge into a cohesive, coherent pop masterpiece.

This motif runs throughout the record- Four Tet (Kieran Hebden) has a truly uncanny way of merging otherwise pedestrian and unassuming samples with one another. “My Angel Rocks Back And Forth” layers an affecting piano melody over a Massive Attack-esque percussive base- a rhythm that sounds like Darth Vader breathing. A ride cymbal gradually sneaks into the mix, adding further depth to an already fascinating sonic concept. “Spirit Fingers” surges with manic urgency, opening with a jittery string sample and insistent cymbals that progressively grow in volume, tussling with xylophones and Thai gongs. Bare-boned and assertively minimalistic, the track still manages to be amongst the most memorable on this offering.

The true opus on this gem, though, remains the ambitious 9 minute epic “Unspoken”. Tori Amos’ INGENIOUS piano line from “Winter” is taken wholesale here, pasted on top of a beautiful kickdrum driven pattern reminiscent of Blockhead’s “Insomniac Olympics”. While that forms the skeletal frame of the track, the number of elements at play here are truly staggering- cymbals, tambourines, chimes, digital distortion, discordant trumpets, each instrumental sample is selected with masterful care and unfailingly precise timing, introduced appropriately to aid in reaching the song’s emotional apex. Yet, that zenith is never reached, and the swelling melancholia of the track is merely content in dwelling in its lazy, shoegazing passivity. There are moments where the contemplative gloom threatens to culminate into something more visceral and abrasive, but these moments are anticlimactic. Really, though, considering how ingenious and eerie that piano line is, one can hardly complain- the track is 9 minutes of pure orgiastic bliss that navigates one through the morose depths of longing and the ennui of loneliness. After the frenetic shuffle of “As Serious As Your Life” (Jay Dilla’s remix of this track being one of the best records of the year) and the weeping “And They All Look Broken Hearted”, album closer “Slow Jam” tugs at your sleeve, sobbing at having to bid farewell. Its cinematic, expansive, almost sappy sound is an apt way to close the record, its warmth and melody hinting at some resolution to the heartache implicated by the tracks that preceded it.

The mere thought that this record is but an orchestrated melange of samples, a journey through a music nerd’s exhaustively extensive record collection is mind-boggling- it references everything from jangle-pop to trip-hop to jazz, its sampling ethic reminiscent of the microsample splicing that has become so popular in contemporary house music, while retaining enough bass and thump to entice your average hip-hop head. While the thought that this record was crafted with no instrumentation whatsoever attests to the growing prowess of the electronic music producer as artist and musician- without the aid of live instrumentation Kieran Hebden has harnessed cold, crass electronics to create one of the most emotionally involving musical opuses in recent memory. Please pick this up.