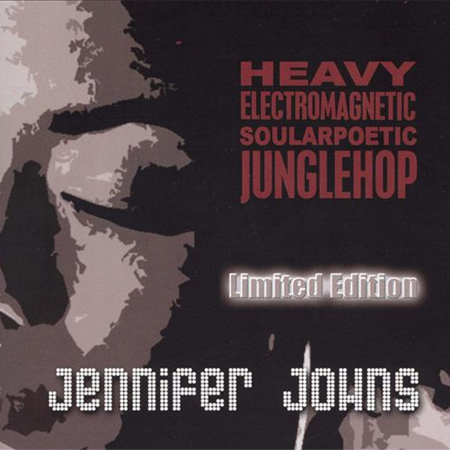 In 2000, Chicago-born, LA-based rappper Spontaneous gave the world a taste of his “Spur of the Moment Musik.” As it turns out, Spon was planning long-term when he rhymed: “Spur of the Moment / be the Musik, and we own it / if you want it, then get on it.” One of the people who indeed did get on is singer/spoken word artist Jennifer Johns, who presents her debut in conjunction with Spur of the Moment Musik the label. Production is handled by Spontaneous, which makes for quite an interesting premise, as outside of the realm of today’s crossover elite (The Neptunes, Timbaland, Dr. Dre, Kanye West, Organized Noize, P. Diddy, Wylef Jean), very few hip-hop producers have bothered to take on the challenge to create music to sing over. In Spon’s case, one might be tempted to hold his own words from “Rock to the Rythm” against him: “Your shit’s feminine like women that sing on R&B tracks / starring some MC who probably sound wack.” But clearly Ms. Johns and her producer don’t represent the usual glossy R&B/rap epoxy. In fact, the jump from the soulful hip-hop of “Spur of the Moment Musik” to the hip-hop soul of “Heavyelectromagnetic…” is actually quite a logical one, especially considering Spon also did beats for his labelmate Mystic.

Like Mystic, Jennifer Johns hails from Oakland, California. After singing for over five years with the Oakland Youth Chorus and performing locally, she began thinking about a professional career. At age 20, she moved to Los Angeles, where she started Pure Love Entertainment, a company that produced live music and spoken word events. Her live credentials include a recent European tour with Gift of Gab of Blackalicious.

For the naturally cautious expecting Jennifer Johns to fall under the category certain rappers once disrespectfully dubbed “coffee shop chicks” or “headwrap chicks drinking wheat grass juice,” for those wary of the term neo soul, “Heavyelectromagnetic…” has to offer more than what they might expect. Yes, Jennifer Johns can be as long-winded as her album title, yes, a couple of her songs have a neo soul finish, but there’s a musical and emotional depth to her album that should make any sceptic think twice. Johns explores the full range of her repertoire, but never to a point where the diversity gets too much. The wizardry of her production team aside, this is not a singer whose voice falls flat outside of the studio. When she uses a myriad of vocal expressions, you feel she does it at her own will, not because some producer figured out 99 ways to make a voice sound different. Still, the collaboration with Spon is essential to the success of “Heavyelectromagnetic…”

The first time her “ghetto-specific linguistic meets Spontanistic beat techniques,” it results in “Heavy (808 Jungalistic Afro Freak),” an invocation-like invitation where Johns takes on the role of a sorceress conjuring up the spirits of music and dance. Over a percussive rhythm section and Arabic string samples, she instantly has your attention when she commands: “If I lead you will you follow me to the sun? / If I jump first, will you jump too, will you run?” Hypnotic yet still inciting, “Heavy” is a testament to the tribal nature of music, as Johns asks: “If the speaker blows, will you stomp so the music never dies? / Then let the people hear your heartbeat like that 808 drum / it goes…” To be honest, aside from Spontaneous collecting production credits, Jennifer Johns prominently paying tribute to the TR-808 in the opener was the deciding factor when I wondered whether there’s a place for this album on this site or not.

“Heavyelectromagnetic…” won’t reach the same energy level until the official closer, but is an intense experience nonetheless. Purists might point at the drum-n-bass light of “Do You Believe in Love” or the lack of a distinct vocal tone, but fact is that everything here is so measured that it’s hard to call it anything but careful and considerate. Whether she’s losing herself in the ambient atmosphere of “Fallen,” whether she tells you to keep your head up over a simple combination of handclaps, softly touched keys and rhythmic guitar plucks in “Never Give Up,” whether she gets traditional with “Beautiful” or sensual with “O”, Jennifer Johns always takes the subtle approach. That’s why even the “Cherish the Day” cover is a success, even though she doesn’t possess the vocal charisma of Sade. One thing they do share is that striking undertone, a strange mixture of sensuality and sadness. Even the most club-friendly track, “Fire,” is somewhat somber, and at her most intimate, the 8 minute long (hidden/bonus track) “Afraid of Me”, Jennifer Johns leaves us with the same feeling of anxiety she just described.

In short, even the mostly standard subject matter and not always stellar songwriting couldn’t prevent this RapReviewer from being impressed with “Heavyelectromagnetic…” As for Spontaneous, a “well done” certainly seems in order. What was once a generic dis on his part, has now transformed into a promise kept: “If yo shit’s hip-hop, then I’m on some other shit.”