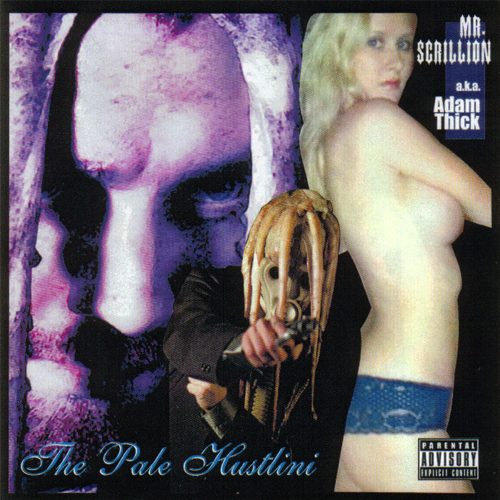 While hack writers and critics who rely on cliche toss around the word “controversial” far more freely than they should, the infamous Mr. Scrillion is genuinely deserving of the title. There are very few recorded cases of a write-up on this website having to be removed (a certain infamous death threat aside) but Mr. Scrillion was so unhappy with Matt Jost’s “Anti-Hero” piece in 2003 that he demanded we remove it AND rewrite it. 99 times out of 100, even if we did take down a review by request, we’d tell the dissatisfied artist or label to take a flying leap if they asked we rewrite it. Whatever readers of this website may think of me (and they certainly let me have it when they feel I’m wrong) I hold the work of my colleagues in far greater esteem than I do my own. To suggest that Mr. Jost needed to rewrite his review was positively insulting, but despite my objections to the contrary Matt decided to take on Mr. Scrillion’s challenge. I’m not sure if his new review was any more flattering than the old one, but Scrillion seemed to be satisfied with it. In fact Mr. Scrillion once again contacted RapReviews.com, alternately begging and cajoling us to review his new and “much improved” rap album for 2004, “The Pale Hustlini.”

The album turned out to be something of an albatross around the necks of the RapReviews staff for much of 2004. Mr. Scrillion’s reputation was by this point already well known, and I unsuccessfully tried to pass the album to several different writers to review. Some just ignored it (understandable) and others just flat out refused to have anything to do with it (understandable). Still if there’s one thing I have to give Mr. Scrillion credit for, it’s persistance. He offered to send yet another copy of the album, and feeling either sympathy or pity I finally agreed to review the album myself if he did. Now the albatross was on MY neck. The album sat around for weeks and weeks, and despite the occasional inquires from Mr. Scrillion about the review’s progress I felt no desire to even break the shrinkwrap on it. The end of the year is rapidly approaching though, and as I did a little “house cleaning” on my record collection I realized I didn’t want this CD to still be sitting on my desk in 2005. For better or worse, I wanted to get “The Pale Hustlini” over and done with. So I sit here now and in full honesty I feel a sense of dread about even hitting the play button. Got to get it done though, no matter what. Okay, deep breath. One.. two.. THREE.

This ten track album starts with the cut “Bling Killa.” I get the feeling the intent of these sampled in audio clips was to be funny, but hearing “for sheezy my neezy” over and over again is anything but. The track’s audio quality is somewhere above Casio SK-1, but somewhere far below the simplest thing one could come up with using Pro Tools. The drums have about all the resonance and punch of tapping pencils on a desk, the synths are remarkably uninteresting, and an attempt to jack up the rhymes by adding a noise layer during verses is nothing more than pouring puke on top of moldy food in an attempt to make it more appetizing with “special sauce.” Speaking of cliches, the anti-commercialistic rant against big cars and iced out chains has not only been done to death, it’s been done far better than this. The most accurate thing Scrillion says during the whole song is “You’ll never see my ass on American Idol.”

Things improve slightly on the title track of “The Pale Hustlini,” but that improvement needs to be measured with an electron microscope. Listening to Scrillion’s voice over long periods of time does something to me that’s quite shocking and remarkable – it makes the Macho Man sound like a decent rapper by comparison. The quality of the rhymes and the ability to rap as a musical artform are comparable in their banality, but the Macho Man does at least sound interesting when he’s talking. Scrillion on the other hand has the charisma of a dung bettle, minus the fresh smell. It doesn’t really feel like Adam Thick is rapping at all. It sounds like he’s trying to overcome his natural urge to run away from girls because his voice is cracking and he doesn’t understand “that funny feeling” he’s got, so he’s imitating as many rap stars as he knows just to build up some self-confidence. None of them would be caught dead spitting these rhymes though:

“And just like in Fight Club, I learned to slide
Minus the bruises and the busted asses
I get more game with every day that passes
I blow smoke, in the face of convention
And writing dope rhymes is my only intention”

Well he may have good intentions, but I think I remember hearing something about the road to hell being paved with whack rap lyrics – something like that. The only thing that saved this song from being completely intolerable is that the beat started to slightly approximate having some bump to it, but only in the feeble kind of way an MC with a two-track mixer and a TR-800 knockoff would have bump. Things get straight embarassing afterwards on the song “I Wanna Rock Too: The Twisted Sister Tribute Track.” Yes, that’s the actual title. While I generally approve of mixing hip-hop and rock in the right doses, but hearing Scrilla brag about how he’ll “stuff salami origami up your nasal passage” with his raps over Twisted Sister samples makes me want to stick my head down a toilet and keep flushing until I reach the other side. “I Can’t Dance” may be an accurate description of Adam Thick, but he seems to think the solution for having two left feet is to just “shake your moneymaker” instead. I’m sure the Juliard School would love to add that to their dance curriculum. “Rappin & Kidnappin” are two things Scrillion has never done in his life, but he’s still got a song about it on this release. Reluctantly I have to credit this as being the only halfway dope song, because even though Thick’s voice is still as pleasant as grinding erasers and ice cubes in a blender on puree, this does finally have some musical bass.

The rest of this album though is pure musical hell. The opening of “9th Gate” starts out with the repeated sample “silence is golden,” and truer words have never been spoken. I wish I could say something positive about “This Life” or “Moochie Mack” or “Primal Instinct” but the simple fact of the matter is that Mr. Scrillion seems to be unable to grasp that he has no talent for rapping, and only just barely manages to acquire acceptable beats for the purpose. I can think of about twenty things I’d rather do than listen to this album again, and cutting off my nads with a chainsaw is one of the more PLEASANT choices. Since Mr. Scrillion repeatedly insisted that RapReviews cover his album, I told him in advance that he deserved fair warning – if it sucks, we’re going to say it sucks, and we’re not going to pull it or rewrite it this time. So here it is. Adam Thick seems like a nice enough guy I admit, but the nicest thing he could do for me is never touch a microphone again in his entire life. I respect that he’s a rap fan, but being a rap fan does not mean you can rap; just like being a fan of football does not mean you could play defense like the late great Reggie White (R.I.P.). So for the sake of us all Adam Thick, retire NOW.