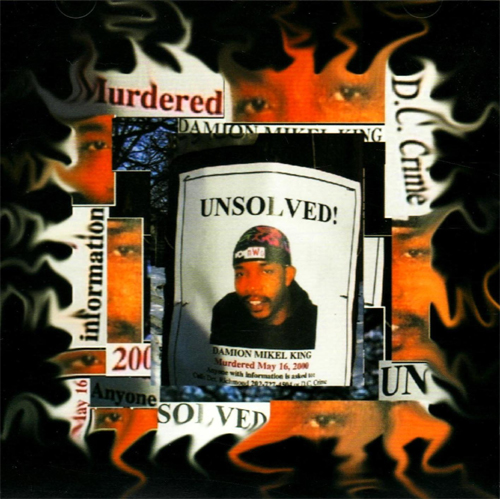 In the wake of a tragedy, several things can happen to a person. They can roll over and curse the world for their hard times, they can quietly accept it as fate, or the negative event can create an unparalleled motivation to surround their lives with positive energy. Washington D.C. rapper LK is an example of the latter. His whole album, “Unsolved,” is inspired by the murder of his younger brother, which is still unsolved after three years. It’s events like these that stimulate people to do things beyond the norm, to bring change in places that need it, to make an effort to break the mold and reach the youth, and yes, even to make songs about the bad effects of smoking cigarettes.

D.C. being right in the middle of the south and New York, LK brings a southern style mixed with a little east coast griminess. His laid-back delivery and accent are reminiscent of southerner Young Bleed, who, if you’re unfamiliar with him, sounds a little like â€˜Dre from Outkast. Unfortunately, LK doesn’t possess quite the liquid flow that these two owned; it’s more like ice water; cool, but every once in a while you hit a chunk, and it doesn’t quite fit.

On the first track, “When Will it Ever Change?” a hot beat quickly melts that ice and his flow is mostly on point. The song is a mission statement that tells you most of the problems addressed throughout the album. A dark, twilight zone-type piano loop sets an uneasy tone as LK goes from describing childhood happiness to the downward spiral that society has taken. He paints a nice picture in a nice frame that slowly starts to mold over, wilt, and decompose and he’s simply trying to sort out what went wrong:

“It seems we headed for a war or two
Damn, what the kids of today got to look forward to?
It’s like we killing ourselves through the violence and wars
We gonna end up extinct like the fuckin dinosaurs
If we don’t come together and learn to live together
Cuz the world’s mad sick and we got to make it better”

All of this of course leads up to the question “when will it ever change?” as a soulful diva pleads on the hook. Although there’s no answer within the song, he does offer different solutions throughout the album.

You can tell this MC is truly out to make a difference with the variety of songs that take a different, more positive route than most rappers. To get his message out, he uses techniques that some of the greatest have made famous. On “He Got Game” he delivers a story Slick-Rick style, describing a young basketball phenom, turned crackhead, turned gas station employee. He tries to bring respect back to the women on “BabyDoll” that unavoidably resurrects memories of 2pac telling them to keep their heads up. A highlight of the album is the laid-back “Nickyteen,” a well-told story about an interracial relationship. The guy in the story, Kirk, was “hooked after their first kiss” and the “relationship grew over the years.” I won’t ruin the story but if you were duped by Common Sense’s “I Used to Love H.E.R.” then you better listen to this one with your thinking cap on.

While these songs show the positive effects of the tragic events in this rapper’s life, many of the other songs reveal the rift still left in his heart from the unsolved murder. The rugged, head-nodding beat in “Our Hearts Cry Tears” creates a dark atmosphere as LK calls out his brother’s murderers:

“So continue chilling like everything is sweet
Thinking everything’s cool cuz y’all still on the street
Cuz what goes around comes around
And for real dog, it could be 10 years from now
You might be a new man, living a new life
Chilling in the house with ya kids and wife
When all of the sudden that dirt that you did in the past
One day come back on you and bite that ass
And when it does and ya dying with little time left
You can think about my brother and how you took his last breath”

Overall, the beats are pretty decent, although many seem like they’re a few tweaks away from being a lot more memorable. His flow often gets choppy as he tries to fit too many words in certain lines, but a casual listener probably wouldn’t notice. The subject matter starts to overlap with similar stories that have similar morals and the songs and references to his brother become common. Making songs about his brother and his death are completely understandable but the references towards an event that the listeners have no affiliation with can get repetitive after several tracks.

This is a sincere attempt for LK to use his own experiences as a lesson and a caution for people walking the wrong path. Even with some similar subjects, he manages to switch it up enough to keep you listening for most of the album. If you’re sick of the negative records being put out or if you just need an album with more insight than your average Chingy or J-Kwon CD, then don’t let your problem go Unsolved; LK might just be your answer.