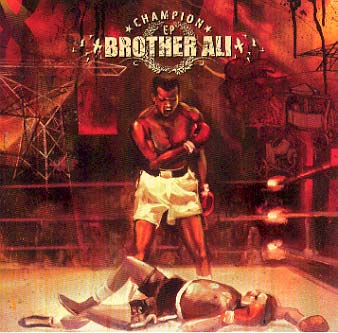 Brother Ali is a perfect example of the diversity in hip-hop’s expansive universe. He is the type of man that couldn’t have been recognized on a national scale ten years ago, and yet he is now one of the underground’s shining stars. “Shadows on the Sun” was an intense journey into the mind of one of the most complex and talented rhyme sayers today. With such an auspicious debut, he chose to follow up in a great way: a nice little EP with more of the same type of material that made the original successful. The “Champion EP” is just another reminder of why Brother Ali made his name in the first place.

I’m not one to tout remixes, but the “Champion” remix that opens this EP is a brilliant alteration of the already flawless original from “Shadows on the Sun.” Ant’s remixed track is heavy on the horns, but the tiniest hint of reggae is an interesting addition. Ali adds a new verse, and by making slight alterations to the remaining verses, the remix is almost a completely new song. Ali is as arrogant as they come, but he clearly has good reason:

“I share the land with hustlers hollering my chorus back
I’ll do anything for the cats that show support like that
When I battle they hold my back, y’all must be smokin crack
Guys are screaming, “I ain’t supposed to rap,” come on, you know you’re wack
These Minnesota cats touch down in places where it’s dormant at
Bring they muthafuckin trophies back
I’m like big up my man Optimus Prime
I’m like what the fuck do rappers got in they mind?
I might jump on the stage and start hollering rhymes
Maybe bend your back around and make you swallow your spine”

Brother Ali is deft with words, but this could be said for many emcees. What separates him from the rest is his personality, the intimate nature of much of his catalogue. “Shadows on the Sun” had plenty of emotion, and the concept songs like “Dorian” and “Prince Charming” subtly illustrate more obscure bits of his character. There is more of the same here. Ali clearly channels his feelings through the mic, and rapping seems to be a way of working out his problems. Few people are born with the ability to express themselves in this way, but Brother Ali is clearly one of them. “Sleepwalker” and “Rain Water” offer plenty of insight into Ali as a person, and this is the true evidence that he is one of the best rappers alive. Ali destroys competitors on tracks like “Bad Ma Fucka,” but his true test is the personal reflection.

Ant’s work on the EP is very similar to his previous production on “Shadows on the Sun.” He isn’t very daring, but this is a welcome change after the disappointing “Seven’s Travels.” His beats are vividly soulful, and he employs many of the same types of vocal samples and loops as on Ali’s debut. If anything, he has regressed slightly on the “Champion EP,” simply because he doesn’t appear to change anything. Regardless, his production style fits like a glove with Ali’s vocals.

Brother Ali is a remarkable emcee. He is obviously drawing on a lot of experience, and has clearly put a lot of effort into his music. Anyone who has seen this man live knows his passion for the music, and it is that passion that makes his music so involving and powerful. Ali is doing what he loves, and feeling the same enthusiasm that Ernie Banks felt when he said, “it’s a beautiful day, let’s play two.” This rapping thing pays the bills, but if it didn’t, I think Ali would be rhyming anyway, just for the hell of it.

For an EP, “Champion” is a surprisingly full listen. A couple of songs are really lengthy, and the nine song album isn’t much shorter than some other of this year’s favorites like “The Grind Date” and “The Tipping Point.” Brother Ali is a powerful voice, and he continues to find the music to match his talents. With no sign of weakness, a full-length might have been classic, but the “Champion EP” will do quite nicely. This man lives and breathes hip-hop, and this excellent record shows it.