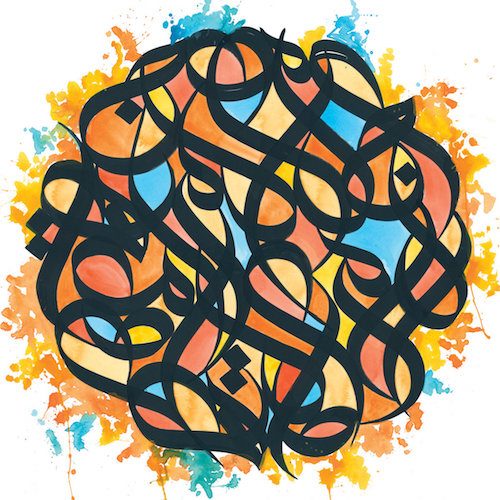 Just the other day, some friends and I were listening to some of the most recently released hip-hop albums. Among them was Brother Ali’s sixth studio album, “All the Beauty in This Whole Life”. Amir Sulaiman’s declarative opening on the intro track, “Pen to Paper”, had my friends thinking that this was Ali himself. I told them, “No, just wait for it.” Following Sulaiman’s vocalization of the mission statement of this album came some piano keys, which escalated full-force at 0:47 with Brother Ali’s unmistakable voice kicking in at the same time. A mix of KRS-ONE, Chuck D., and a most passionate street preacher, Brother Ali’s mic presence had my company eagerly inquiring about him. Granted, the first time I myself heard him a decade ago was like the first time I heard MC Serch and Pete Nice on the radio more than a decade ago erroneously (but understandably) assumed that they were Black. The assumed the same of Brother Ali as well. The two things about him that surprised them the most was learning that Ali’s a practicing Muslim and that he was born with albinism to a White family. One friend perked up and stated, “Damn! He must’ve had it rough growing up!”. That’s a dead-on statement considering all the raps that Ali has released recounting his childhood experience in being a misunderstood youth. In all of those raps, the one take-away is that the man learned from all the mockery and alienation. He didn’t let it or his affliction define him, he took it all and made it work for him instead.

This is Ali’s first album since 2012’s Jake One-produced “Mourning in America, Dreaming in Color.” After a long respite, he has reunited with Anthony “Ant” Davis. With Ant back as the sole producer, it’s a return to the usual format that longtime fans have grown accustomed to from most Brother Ali releases. Ali’s passion as an MC, plus Ant’s sampled beats combined with live piano courtesy of Graham Richards here and there contributed to making this album hip-hop’s most soulful 2017 release. Take “Dear Black Son” and “Can’t Take That Away”, for instance. Both are dedications to Ali’s family with the former being a heavily piano-driven letter rapped to his son, explaining the realities that he’ll have to face being a Black American. The latter is penned to his wife and the trials and tribulations that make their relationship worth it. What really gets me about the track is the piano coda fade-out during the last minute of the song. “We Got This” has some dusty boom-bap drums to start and includes fellow Rhymesayers label mate, Sa-Roc, as she handles the ending rap of the song. At first, I thought Ali’s raps on this song were venturing into some na•ve, hippie-esque “We Are the World” tripe, which would sound clichŽd in the hands of a lesser rapper with even less experience. But Ali’s presence in hip-hop has demonstrated that if experience is the best teacher, then he is one of experience’s best students.

Any longtime listener of Brother Ali knows that he’s no stranger to controversy. Like Immortal Technique, he’s outspoken in both his music and his activism. He’s never had any compunctions about unflinchingly examining taboo topics like race and religion. The blues guitar-driven “Uncle Usi Taught Me” is a personal narrative that looks at the effects of hip-hop in some foreign lands. Here, Ali recounts his experience performing hip-hop in the Republic of Iran and getting death threats and excessive interrogation because of it.

The gospel-sounding production on “It Ain’t Easy” feels like Ant is rechanneling sessions from Atmosphere’s “You Can’t Imagine How Much Fun We’re Having”, which works with Ali’s style. One song that sounds out of place here is “Tremble”. The beat has a murky bounce to it that doesn’t flow with the emotional musical seam of the rest of the album. The album quickly gets back on track with Ali’s angry indictment of White America on “Before They Called You White”. He gives a lyrical history lesson starting with the birth of White supremacy and its evolution from a false & hypocritical sense of racial superiority into an oppressive systematic institution in the present day. The accompanying beat sounds like it contains a Gil Scott Heron sample which would actually be ironically fitting, but wholly appropriate:

“Bitten Apple” takes the album on a slightly dark and somber detour, though Idris Phillips wistfully-sung hook could qualify it as a radio single, despite the subject matter on the song. But whoever said that dark songs with a shiny gloss don’t rise to high points? TLC’s “Waterfalls” was a huge hit and is still catchy as hell, but we all know that the song’s lyrics are socially conscious about touchy subjects. “Bitten Apple” is no different, but it tackles a topic that’s rarely, if ever, maturely discussed in hip-hop: Addiction to internet porn. I don’t know if Ali has any hands-on (no pun intended) experience with this subject, but his familiarity with it and its effects both internally and externally give the lyrics weight:

“School girls are flashing the camera
Profile pic look just like the next amateur
Babies get exposed no one’s controlling how it damage them
You find yourself detaching, retreating, reacting
Deep anger, decreased passion and you keep lashing out
Your sweet family reminds you of your weak habits
You have no mercy for yourself and so you’re relapsing”

The album closes off with a title track that’s just as full of life as the rest of it. On the autobiographical “Pray for Me”, Ali describes his youth growing up as an albino and the alienation and ridicule he suffered as a result. It sounds like a heart-tugger for certain, as the pressure for him to conform or hide his appearance was more than extreme for him. He learned self-acceptance from James Brown’s rejection of hair-straightening chemicals and pride in being Black. Ali mentions Elvis Presley in that same verse, which is ironic as he himself is also a White man who performs who creates music crafted by Black artists. The only difference is that Brother Ali isn’t a cultural appropriator. With “All the Beauty in This Whole Life”, he created not just an album that represents an arranged amalgamation of his own experiences, but also a hip-hop album with so much soul that Rakim would blush.