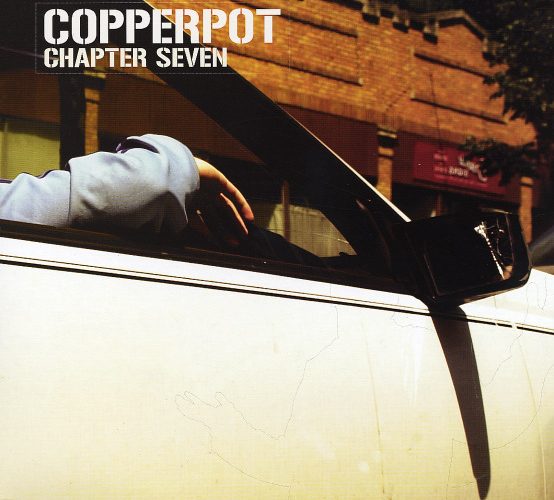 Who would have thought that corporate America could have had such an effect on an artist like Copperpot? Upon his discovery that one can buy plane tickets on the internet, he took off around the world with a handful of new credit cards, and set out to search for the perfect beat. Among other things, he explored an entire continent for material to make music with. Plenty of overseas crate digging, as well as his newly acquired sense of the world, place the context for his debut, “Chapter 7,” for EV productions.

Copperpot hails out of Chicago, and is well-known locally behind the boards. There are plenty of guests to help him out here, so he doesn’t quite establish his voice as a rapper. Edo.G, Pace Won, Mr. Complex, and Diverse all contribute their voices, but Copperpot is clearly the star. His production is balanced and intricate, and despite little variation in tempo, there is a wide variety of loops that he uses perfectly. By the eighteenth track, the listener will encounter a bit of monotony, but Copperpot provides plenty of good material for his friends to work with. He rhymes on the album as well, but his strength is clearly the beats. Upon hearing this album, many should be knocking on his door in Illinois.

With a couple of exceptions, the emcees don’t do their parts. Edo.G has a nice turn on “Take’n’Over,” but a lot of the punchlines on “Chapter 7” are worn out and devoid of creativity. Everyone is looking for their shine in such a short space, so battling is the most prevalent style. I’ve heard a few of these artists on their own, and they could have done better. The luscious beats aren’t done justice by the guest list, all of whom appear to be talented but don’t quite nail it here. In the hands of one rapper, the album would have been more lyrically connected, but the extensive guests hinder “Chapter 7″more than they help. Copperpot was right in searching for lyrical help, but it just doesn’t quite pan out.

“Chapter 7” will stand the test of time because of Copperpot’s excellent production work. He appears to be able to craft something to fit every voice, and each track is catchy. It is a shame that the vocal performances aren’t better; this would have been a great album if that were true. Regardless, Copperpot’s music holds the album together despite some underachieving from his cohorts.