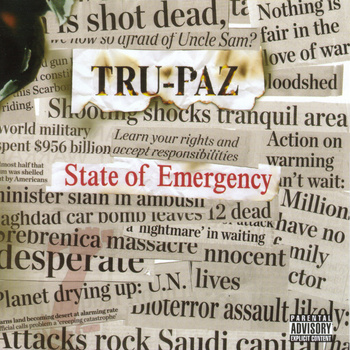 With reggae’s slow but steady influx into hip-hop as a hook substitute for R&B jingles, it was only a matter of time before some group integrated its pop-potential wholly into their ranks. P. Diddy attempted to splice a little Jamaican spice into his TV proteges Da Bandâ€¦and we all know how that went. But Tru Paz (pronounced troopers) isn’t trying to interpose an adjunct, island sound into hardcore hip-hop. Tru Paz’s sound is rooted more in reggae than it is a rap. Their trio gathers a diverse palette of talents including one lead MC, Akin, one producer, DJ Unknown, and one Rasta man, Boozy, for a little Jamaican bacon. The conglomerate combines for a melancholy mix of Jamaican blues and Indie Rap.

Initially, the group’s island-esque style is hopeful. Boozy’s choruses are comfortable yet catchy, Akin doesn’t leave the gaps flat, and DJ Unknown’s beats add a subtle, sea swaying, Jamaican rhythm without being too obtrusive. The first track, “Paint a Picture,” embodies the type of laid-back but chipper blend of music you would expect. However, even though the album preserves its Rastafarian rhythm through its entirety, the mood of the album quickly grows poignantly serious. In “For Whom The Bell Tolls” a distant belltower chimes cryptically in the background as Akin races a set of piano keys. “Sunshine Children” and “One Day” are not as musically astute, but survive off of Boozy’s catchy, empathetic choruses.

There are a few too many downers though. Don’t get me wrong, I’m a fervent campaigner for more content in music. But the artist or artists who choose to use conventionally unappealing subject matter must be capable and prepared to make the music dope enough to carry the extra weight of their words. As Talib Kweli, the figurehead of conscious rap, responded to his recent popularity, “if I was wack I’d be irrelevant.” Filling an album with tracks like “We Ain’t Promised Tomorrow” and “Babylon is Falling” is admirable, but not musically appealing enough to carry them to the next level. Emotionally, “State of Emergency” will have you in a state of depression by its conclusion instead of in a state of retrospection. Musically, these heavy-hearted tracks impede the album’s pacing almost to monotony. Every once and a while the perpetual gloom the group seems to relish in rises, the black clouds clear, and a more enthusiastic track will slip through like a sun ray. For instance, “Feel This” and “Rude Boy” temporarily reenergize the album, but dissipate under the sluggish weight and slow pacing of the album’s more serious tracks.

Nevertheless, if you are a fan of reggae, “State of Emergency” is something you will fancy. “This Love” and “Exodus” lean so far beachside that you can jam to them all day if the mood is languid enough. If you are predominantly a rap fan, you might want to wait until Tru Paz can refocus their collective passion musically and offer something more impressive.