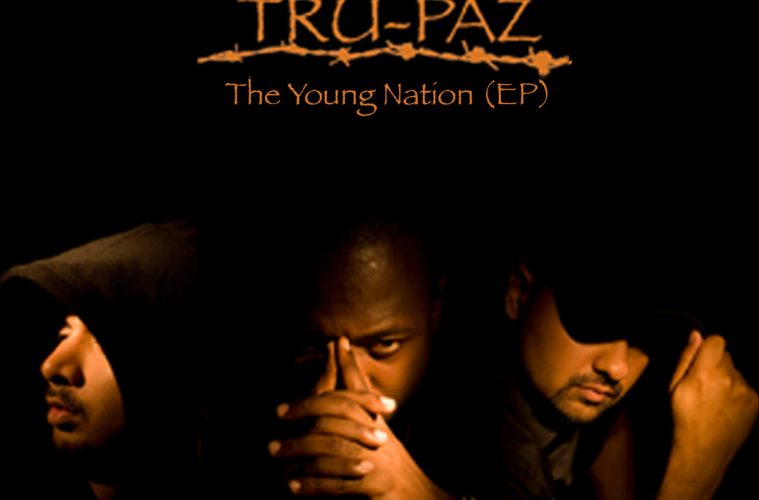 If you have no patience and don’t want to read several paragraphs of detour to what is essentially a substandard 3 track EP, click off while I envy your innocence, to put it generously. If you’d like to know why I’m giving “The Young Nation EP” such a low score, then read on, and reconsider, I hope, some of your own biases. I don’t want to necessarily be corrosive, or simple-mindedly dismissive – it’s not helpful to Tru-Paz, nor to hip-hop as a whole. But, I don’t want to indulge mediocrity, nor – and this is important, too – leave you with a single negative paragraph, and nothing to think about.

I first got into serious hip-hop in 2003. Back then, the ‘conscious’ label was all I needed to convince me of quality, for the only ‘conscious’ hip-hop I knew was the classic stuff. It’s what happens at first – you keep hearing about “the Canon,” check it out, and inevitably find plenty of artists that fit their reputation.

Ah, the naÃ¯vetÃ© of adolescence! If you are diligent, you don’t stop there, but come across a lot of mediocrity that might confuse you into thinking it’s good. In this other category, the artists exploit –intentionally or not – the immaturity of your brain, and play on your emotional connection to ‘good ideas.’ Implicitly, I take it as an attack on the audience. I mean, you’ve sometimes been taught that artists with great politics – Dead Prez, to use an example of banality – must be good on the strength of their ideas, right? Or, if you’re younger, that they’re ‘hot,’ or sell a lot, or smart, or have suffered, or whatever – or that you, immature as you are, can ‘connect’ with them philosophically? Is this allthat art is judged by?

If you think so, congrats – you don’t ever have to read a music review again. In fact, you don’t even have to listen to music again, or engage in any art whatsoever. Just join a support group, or a political party – it’ll fulfill the same personal need, without dragging you through the pretense (and baggage!) of artistic experience. Of course, there’s nothing wrong with that â€“ people enjoy different things, and art â€“ in its pure form â€“ is not always it.

Ah, but you’re still here – you don’t want to do that. You do, in a vague kind of way, engage in art beyond the above ways, even if you don’t always realize it. You get something else out of hip-hop than politics, or support. You’re moved in ways that, say, reading an essay, or going to a political rally, does not move you. It’s expected â€“ people listen to hip-hop for many, and often complex, reasons.

So, what’s next? Realize what art is, or, rather, what the major components of art are. ‘Ideas’ are certainly important, but how they’re expressed is just as, if not more, important – few things are truly original, so distinction has some new requirements. In hip-hop, we have excellence in production – originality, form following subject, and all that – and in the rap itself, creative flows, idiosyncrasies of diction, rhythm, tone, atmosphere, humor, wit, and so on. This helps establish the difference between The Coup and Dead Prez. Or, to make it relevant to the review, the difference(s) between The Coup and Tru-Paz. One avoids platitudes, which are one of the artistic no-no’s. The other basks in them, and struggles to do much else.

And so, “The Young Nation” begins inauspiciously. The title track is almost a parody of what’s wrong with ‘conscious’ hip-hop: a dearth of ideas, no originality, and an inability to distinguish between good art and good politics, or intentions. In brief, the song laments oppression. In itself, that’s not a problem (that is, it’s artistically neutral – both good and bad artists did, do, and will lament oppression), since The Coup, for example, laments – and laments much – too. It’s only an issue here because that’s all it does – it laments, almost in the form of a list, every generality every conscious rapper has repeated before. A sample, which is sung – with a nice touch of melody, actually – by the reggae-influenced Boozie:

It’s clunky (look at that third line!), clichÃ©d (in ideas, in expression – all said before, especially in the final refrain), and never rises above some generality. If I’d have to, I couldn’t guess whether this verse was done by Boozie, or one of a thousand other ‘conscious’ artists.

Production-wise, it fares no better, with two major problems. First, it takes the too-obvious approach: ‘wailing’ vocals, samples, and so on, in the background – to signify despair, obviously – with an equally ‘hopeless’ piano, with that accomplished by giving it no more than a few dull keys. Second, this ‘obvious’ approach, while it gets no points for originality, actually loses more than a few for not even doing the hackneyed well. As noted, the despair of the piano is unimpressive, and, in the last minute and a half or so, the production is subdued, to make way for, and emphasize, Akim’s verse. Again, these techniques – lyrical, musical – have been done to death, and Tru-Paz does little to bring them back to life. An instrumental version (like of all songs here) is included gratuitously.

“Less We Forget” is a bit better – Akim, while lyrically nothing, has a nice ‘robotic’ flow, and the production kicks off with a distinctly sharp electronic string of sorts, and a subtle bass. A (very) muddy vocal comes on throughout, audible only in the instrumental version. It’s a little complex, but doesn’t drown in itself – a rare thing, it seems. The title’s error is theirs.

Speaking of titles… “Everyday Goes By” continues the tradition of the first track, with the same problems. Akim, as before, demonstrates a good flow, and Boozie has a decent sense of melody. But, all of the bad repeats itself.

A few weeks ago I reviewed Trick Trick’s awful “The Villain.” Some readers will notice I’m giving Tru-Paz only a slightly higher score. The reason is simple. Both the gangster rap and conscious rap sub-genres have their own clichÃ©s, and belonging to one genre does not necessarily (only usually) mean one rapper is better than the other, or capable of a better ‘sum’ in art. It only means one might be a better human being, with a few new ideas. It’s better than nothing, but can’t affect the score either way.