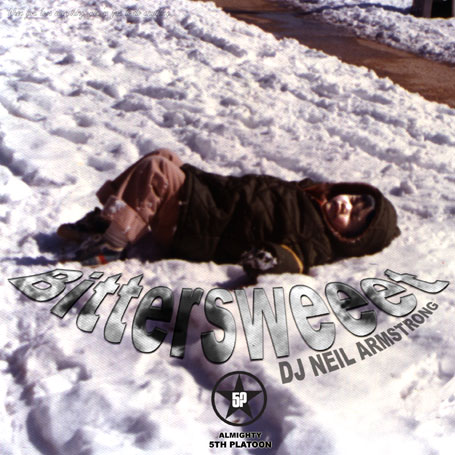 What would happen if you removed the mixing element from today’s mixtapes? The sad truth is that nothing would happen as today’s mixtape scene has already been stripped of almost all DJ skill and mixing element. Green Lantern always includes a few “Green” mixes, but Tony Touch may be the only DJ who still puts out a “mixtape” that is actually mixed and scratched. Outside of these 2 DJs, whenever any type of mixing is included on a mixtape it gets hyped up and labeled as a “blends” CD. Thankfully, there are still DJs out there who not only do what they are supposed to do, but don’t expect any extra props for doing their damn job, Neil Armstrong is one of those persons.

“Bittersweet” is one cohesive experience from start to finish. It actually could be considered a concept album of sorts as Neil Armstrong divides the mix into different sets each expressing a different element one goes through in any relationship, good and bad. Since it deals with love, the mix is almost entirely R & B based, but while the songs themselves are soft in nature, Neil Armstrong does his best to infuse the mix with Hip-Hop flavor.

Imagine listening to Stevie Wonder’s “My Cherie Amore” and then having the original instrumental dropped in favor of The Clipse’s “Grindin’.” Its hard to imagine how those two songs would mix without actually hearing, but the result is amazing. Teena Marie’s “Ooh La La La” gets mixed with 50 Cent’s “21 Questions” for another unlikely but equally satisfying mix. Other noteworthy mixes include Janet getting nasty with P. Diddy’s “I Need A Girl” and Bobby Brown’s “Tenderoni” over Busta’s “Break Ya Neck.” Aside from the mixes, any hip-hop fan will enjoy hearing tracks like Debra Laws’ “Very Special” and Teena Marie’s “Ooh La La La,” inspirations to LL Cool J’s “All I Have” and The Fugees’ “Fugee-la.”

Though these touches of Hip-Hop do liven up the mix, the real skill comes from Neil Armstrong himself as he expertly mixes classic R&B songs. Marvin Gaye shows up for what seem his essential three songs: “Sexual Healing,” “Let’s Get It On,” and “I Heard It Through the Grapevine.” You also get healthy doses of Michael Jackson, The Whispers, Stevie Wonder, El Debarge, and Earth, Wind, and Fire. R&B fans will recognize Lisa Lisa and Cult Jam’s “All Cried Out” from a remake performed by Allure only a few years ago. The only gripe would be the exclusion of Al Green from the mix, but that would be more of a personal gripe as none of the songs included lack in quality.

As a whole the CD is great, but broken down into sets it gets even better. “Til The Break of Dawn” does a great job of setting the mood as it includes “Let’s Get It On,” Sade’s “Sweetest Taboo,” and even Slum Village’s “Tainted. “Patiently Waiting” captures the anticipation experienced by budding romances perfectly through its mix of songs such as Michael’s “Lady In My Life,” Janet’s “Let’s Wait A While,” and En Vogue’s “Don’t Go.” “Pain” makes the hurt sound good through classics such as “I Heard It Through the Grapevine” and new school joints like Lauren Hill’s “Ex-Factor” and Wayne Wonder’s “Saddest Day In My Life.” Each set is well thought out and fits perfectly in the greater scheme of the mix.

If this review sounds more like an advertisement than an objective critique don’t fret, the accolades have been well earned by Neil Armstrong. Not only is the man skilled as a DJ, but he also has an impeccable taste in music. “Bittersweet” will take you down memory lane musically and, unless you have no heart, chances are it will also stir up a few romantic memories along the way.