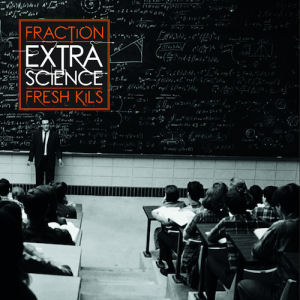 Canadian hip-hop combinations are nothing new, but the collaboration of Kitchener, Ontario emcee Fraction with Toronto, Ontario producer Fresh Kils still feels like something original and interesting. It probably doesn’t hurt that their publicity firm is called Must Be Santa, which is a eye-catching name for me, as is the fact their business cards come with a hole punched out so you can tie it to a present as a gift tag. Doing anything that makes your project stand out from the endless parade of digital and physical projects that come across my desk is highly appreciated, but the “Extra Science” this duo displays is what really makes them stand out. The dark and menacing bass of “Another One Forgotten” adds the perfect component to a harrowing tale:

“Meet Marvin, grew up starvin, product of a foster home
Mother was a crack fiend, father was unknown
The family that took him in had problems of they own
They’d send him off to school then beat him down when he got home
Yo his stepfather liked to touch, a little too much
It fucked with Marvin’s brain (uh-huh) let me explain
Violence he could not defy, thus a deep-seated anger developed
Unto himself became a stranger
On to run away at fourteen, never to return
Hopped the train, but still couldn’t escape from his pain
Could only maintain the balance for a limited length of time
before the side effects of molestation manifest in his mind”

Things seem bad at this point but trust me they only go downhill futher, and the scratched in samples of “another sad story to tell” and cackling laughter create a track that could put any “reality” rapper to shame. It’s also more horrifying because unlike emcees who try to shock and awe with their body count or ability to chop body parts, every part of the song sounds like a plausible real life scenario of how the monsters among us are made.

This is only one aspect though, one of eleven different chapters in the “Extra Science” story that Fraction & Fresh Kils tell. Some of the topics are familiar, but the quality with which they are delivered is not. “Change” is something people always call for, but Fraction and Fresh Kils personalize it by flipping the production for each verse. It’s not just that his strong breath control and deep vocal tone catch your attention, it’s the fact that Fraction uses unique verbal imagery in his flow. Fraction changes himself and avoids “that faulty manufactured implementation of change” as he simultaneous excretes negativity to “shit the past like a ‘coon.” Therefore when he calls for finding “The Balance” in your life as a person and an artist, it doesn’t come across as phony or cliche – he floats above the piano backdrop like a self-made superhero with his vow to “stay ahead and keep it movin like the glaciers be.”

Listening to “Extra Science” was an unexpected and powerful pleasure, representing the arts to the depth you can picture people breaking to the beats in your mind’s eye. It’s not hard to see why Fraction won the “Rhythm of the Future” contest in 2008, because he already seems a year or two ahead of his peers lyrically, and Fresh Kils is ideally matched to his flow. From the new age boom bap sound of “Like This” to the deep black keys of “Enemies Close” to the soulful posse song “Hold On” featuring Specks, Justis and Mantis it all makes sense in a finger-snapping toe-tapping way, while Fraction vows to “put weight on my reflections like I’m bench pressing my thoughts.” Yes, this brother is that heavy. Sleep on “Extra Science” and you will undoubtedly fail Hip-Hop 101.