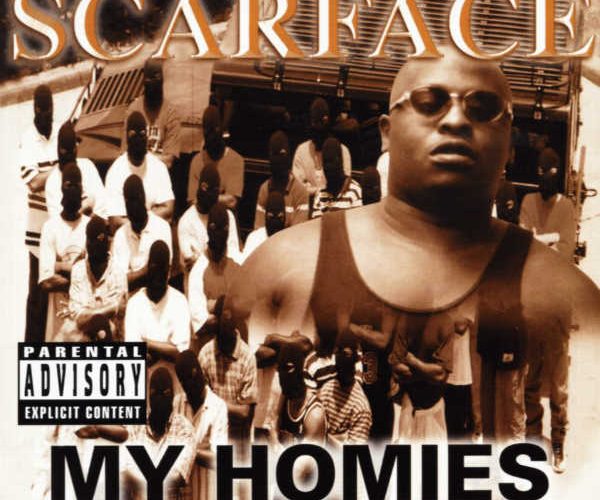 Sometimes average or even below average albums can hold a disproportionately prominent position in one’s listening log. Scarface’s “My Homies” is such an album for me. I hold the precursor to this year’s “My Homies Part 2” in high regard, even though there’s never been a moment where I thought it lived up to my (admittedly high) expectations. But in early 1998 “My Homies” was a revelation nevertheless, causing me to keep it in constant rotation. Although I have to admit that this was partly due to the 60-minute tape I shortened it to.

Still, here are the reasons I defend “My Homies” to this day, all of it, both CD’s, the entire 137 minutes. The initial disappointment that this is not – as one may be led to believe – a Scarface solo album but a compilation aside, in regards to Face and his state of mind “My Homies” felt like a return back to Earth (or the hood, if you will) after the royal retreat of “The Untouchable,” whose It’s-lonely-at-the-top aura was in some ways spookier than “Life After Death” and “The Don Killuminati (The 7 Day Theory)” combined.

Let me explain. Contrary to Dr. Dre’s claim that he “bought a house big as Scarface to show my happiness” (as stated in 1997’s “Firm Family”), the big house Tony Montana entrenches himself in is the drug lord’s stage where his steady downfall and sudden defeat take place. His passions turn into obsessions, his will to win becomes self-destructive. It’s doubtful whether the man who once had nothing but his balls and his word really knows happiness at this point, considering his mother disowns him, his sister flees his overprotection, his girlfriend refuses to become pregnant and he’s fucked over enough people to fear for his life as long as it lasts. The palace he once entered triumphantly turns into a jail, from which he has to be freed forcefully to finally find peace in death.

Artistically, the monumental “The Untouchable” was the solitary flight of a rapper who drifted across a higher plane, who was so far ahead of the game that he ran the risk of losing some. In short, in 1997 it seemed the only way for Brad Jordan was down, and 1998’s heavily populated “My Homies” was the appropriate way to touch ground again. Having escaped the isolation of the ivory tower, the Scarface of “My Homies” was much more down to earth. The album’s theme song, “Ma Homiez,” was prominently put first, opening up disc one with a phone conversation between Face and his grandmother. He asks her if she’s mad at him “for the stuff I be sayin’ on my records,” and when she denies, replies, “So then everybody else shouldn’t be mad at me either, then?” As clever as that is, Face follows it up with three knock-out verses directed at the hypocrites who try to demonize rap music:

“How dare you so-called black politicians
knock me for the game that I explain to my listeners?
See, they wanna put me on remote control
so they can turn me on and off when they feel it and try to take control
But I refuse to cooperate
You take away the plug out the game, it ain’t gon’ operate
So now we’re picky with the wickedly ways
And I done been inside the beast in his belly for six days
Cause they solution’s institutionalize
all the game-made millionaires who choose to survive
Instead of fallin’ dead we bounce to these beats
But you look at my music like a ounce on these streets
I send this out to every street in yo city with blacks on ’em
since every muthafucka got paid done turned they backs on ’em
I got more love for the ghetto than that
and every time I step my ass out the hood I go back
So you can miss me with that bullshit you stressin’
I keep it real with my niggas, with no question
So while you’re teachin’ ’em that shit that they can fake to
I teach ’em shit they can relate to”

A career highlight, the breathtakingly funky “Ma Homiez” is all the justification that “My Homies” needs. Still, a review has to pass judgement, so for the material that strengthens this album’s position, let me stick to the 14 tracks that made my tape back in ’98. “Ma Homiez” is immediately followed by “Hustler,” an engaging East Coast-tinged contribution by the Hoodlums and producer Mr. Lee, before it’s back to a slower pace with a stellar Tone Capone-produced duet between H-Town’s Bushwick Bill and V-Town’s B-Legit. “Do What You Do” is gangsta and pimp rhetoric at its finest, formidably executed by two vets of their trade. Clearly a rip-off of Pac & Dre’s Joe Cocker-sampling “California Love” (including the talkbox hook), “Southside: Houston, Texas” is still a banging Houston anthem featuring Scarface, Tela and Devin:

“Southside, nigga what, nigga Southside
Bitches comin’ down from outta town with they mouth wide
open, scopin’ out the popped trunks, trippin’
off the candy paint drippin’, elbows and vogues dippin’
Lookin’ for somethin’ to happen
and thinkin’ that these streets are cool and I’m the fool
to show ’em around cause I be rappin’
That’s when I let ’em know, hoe, there’s no southern hospitality
cause one day you’re here, then a sudden fatality”

Devin had already introduced himself to Rap-A-Lot faithfuls through his membership in the Odd Squad and FACEMOB (whose menacing “Don’t Testify” also graced my tape), but it were his performances on “My Homies” that later that year made me cop his debut on sight. “Do What You Want” and “Boo Boo’n” would both be included, and rightfully so, both being perfect examples of Devin’s unique balance of humorous and serious, of foul and insightful. He shows his explicit side on “Use Them Ho’s” with Atlanta’s KB, and of course the most notorious track this double CD holds, “Fuck Faces.” Giving R&B a run for the money with their lavish track, producers Brad Jordan and Mike Dean set the stage for Tela, Devin, and Too $hort to spit some exquisite game, but it’s the host who steals the show with his account of a romantic encounter.

To continue with my tape tracklisting, “The Geto” is a hard-ass NO Joe track, reinforcing the point of “Ma Homiez” with thoughtful lines from Face (“I’m just a homie out the hood who done did somethin’ / and while you’re frontin’ I’m 10 years and I’m still bumpin'”), Willie D (“How can we treat our children worse than we were treated in the ghetto / and turn our women into widows?”), Ice Cube (“This ghetto slang is some shit that can beat college / you ain’t fuckin’ with this hustler with street knowledge”) and KB (“I’ve been caught up in this bitch / from the OP’s and all the way down to Eastwyck / even Flat Shoals and Glenwood, it’s all good / Boulder Crest to Columbia Drive, it’s all hood”). My tape featured the occasional no-namer or newcomer, such as E-Rock and C-Note assisting Face on the lean “Dog These Ho’s,” but the vets had the upper hand with the likes of UKG and 3-2 teaming up on the introspective “2 Real.” Finally, to honor the dead, there was “Homies & Thuggs” (I picked “The Original” over the “Friends”-sampling “Remix”), a Scarface/Master P duet with a rattling 2Pac freestyle tacked onto the end, and the haunting “Sleepin in My Nikes” from the late Oaktown hustler Seagram.

That leaves 16 tracks I’m a little bit less familiar with. Some of them are quite good, such as A-G-2-A-Ke’s 88Keys-produced “What’s Goin On,” which props up a very phyiscal flow against a mellow beat. FACEMOB’s Mr. Lee-produced “You Owe Me” typifies Rap-A-Lot’s independence from samples and Jordan and Dean’s “Who Run This” is a surprsingly different production featuring a lot of low-end percussion. Other songs shine partially but are still typical double CD filler material, making “My Homies” look like a training program for Rap-A-Lot Mafia members like DMG, Do Or Die, Johnny P, Big Mike, 007, Menace Clan and FLAJ. Despite Face being on 13 tracks, one couldn’t avoid the impression that “My Homies” was, in parts, the first strike in countering the dominance of No Limit Records by copying its market-flooding tactics, including attempts to branch out into R&B (Johnny P, FLAJ) and rock (Rag Tag).

While Scarface is “mobbin’ for me and my homies,” homegirls inevitably play the back, and have every right to be offended when he complains about “bitches comin’ up off they babies” (“Greed”). “My Homies” is a man’s world, from the violent nightmares to the sexual fantasies. But it would be too easy to disqualify it as another clichÃ©-filled compilation promoted with the name of a label’s current cash cow. It was a form of establishing an underground network of young blacks from South Central to Chicago, from the Bay Area to the 5th Ward, who all had a similar story to tell. To quote “Ma Homiez” again:

“If I ain’t learned nothin’ else I learned to struggle and strive
cause the ghetto made a man out a nigga, I can’t lie
But every black community done seen the same thing:
Somebody come up out the hood and make a strange change
Ain’t no forgettin’ where it started for me
The hustle out the hood never departed from me
No matter how many niggas try to change my story
can’t nobody make me go change my story
So muthafuckas claimin’ that they represent life
make sure them hoes is representin’ it right”