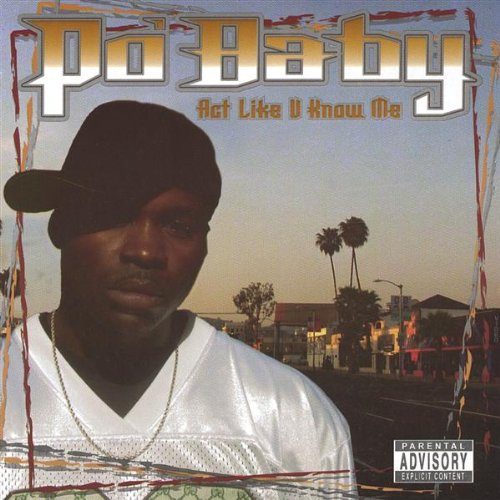 Hailing out of Chicago and representing the 3 Deep Records family, Po’ Baby’s debut album “Act Like U Know Me” is an eclectic mix of rapping styles that unite to form a very interesting record.

The album starts out with “Oh My Lord” a track the doesn’t use the Lord’s name in vain as it sounds like it would be at home in any church, musically at least. Using a sing-song flow reminiscent of Nelly and spitting over a pounding organ-driven track it’s the perfect intro as it grabs the listener’s attention. The title track follows, and while the beat is on point the topic matter seems a bit played out as Po’ Baby demands that we act like we know him and spits average brag-rhymes. “I’ll be There 4 U” brings mixed results, though the hook and the beat are a bit corny, Po’ Baby’s heartfelt lyrics are the track’s saving grace. “Po’ Baby” is an up-tempo swing track with sharp horns used for the melody and a catchy sung hook. Po’ Baby switches up his flow here and rides the track well.

The rock-inspired “No Home” also works well for Po’ Baby as he addresses the problems faced when returning to his home town after a long time away. “How Sweaty Monkey Love” has a silly title and does nothing too innovative lyrically, but the beat is surprisingly catchy as it incorporates monkey sounds and chanting to set the mood. “Pussy” is a track that tries to flip the script conceptually as instead of outright calling out people he considers “pussy” Po’ Baby takes their role to prove his point. “Go Thataway” is a club track that takes a humorous approach to the ladies as Po’ Baby tells those he finds undesirable to get out of his way, rather than beckoning the attractive ones. The album ends appropriately with “It Ain’t Hard,” a track that is a celebration of sorts addressing the difficulties of getting radio play and getting attention in the rap game and the redemption felt when the dream materializes.

From start to finish “Act Like You Know Me” is a pretty solid album. Lyrically Po’ Baby relies more on his delivery to keep you listening as he has a versatile style and can adapt to any beat well. It’s a mix of many different styles, from Midwest swing, west coast funk, and even Chi-town’s own light speed flow. Musically the production is consistent, if anything too consistent as some songs seem to flow into each other a bit too well. The music is also influenced by various regions and ends up giving Po’ Baby a sound that is all his own. Tracks like “Wall 2 Wall” and “Thuggin” could have been excluded as they are poor attempts at club and crunk music, but otherwise Po’ Baby does a good job of varying topic matter and flow enough to keep you tuned in.

While not mind blowing lyrically or musically, Po’ Baby’s debut shows enough talent and potential to give you reason to believe that next time you see or hear Po’ Baby you won’t have to act like you know him as he may have reached a larger audience by then.