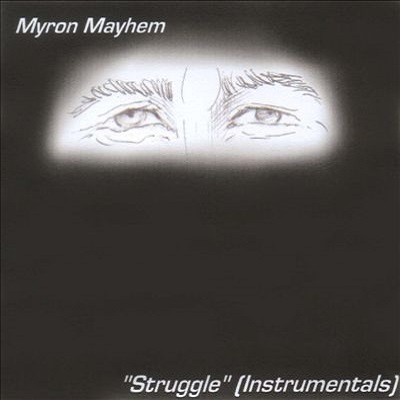 Accompanying Myron Mayhem’s instrumental disc “Struggle” is a short but revealing note. Myron wants listeners to know that “this is an instrumental record, it contains no lyrics, only beats. I am currently searching for the right MCs to work with. Please keep in mind that this is an instrumental only recordingâ€¦ peace and pounds to real Hip-Hop everywhere.” This note is very useful, because his auspicious debut is best consumed as strictly beats, nothing else. It is not a complete, coherent hip-hop album so much as a resume, a teaser of what he has to offer.

It’s tough to judge a record like this, which frequently relies on slightly warped vocal samples to provide the song titles, based on anything other than each beat’s individual success. On “Struggle,” Myron easily passes the test. There are very few standouts because much of his production work relies on lethargic pacing with dream-like vocal samples and haunting loops. “Subway and Sewer Systems” is a prototypical Mayhem work, as he weaves the faint voice sample over a nice piano snippet. Many of the songs are similar in terms of tempo and even specific sounds, but for the most part, this creates a sort of signature mood that is prevalent throughout “Struggle.” Over twenty two tracks, the frequent pianos grow a bit old, but Myron mostly avoids monotony. “Dirty Gunz,” for example, features an odd trumpet section that nearly sounds like goose noises. The slightest flourish added to each track enhances the ease of listening to the album as a whole.

The most apt comparison that comes to mind when listening to “Struggle” is El-P’s production circa “Funcrusher Plus.” Though not as varied or intense, the atmosphere that Myron Mayhem evokes is similar to the subtly grimy feel that propelled Company Flow to the height of early underground fame. In fact, this CD doesn’t really provide any sense that Myron can construct an uptempo production, or even something that varies from the formula he capitalizes on here. To be fair, there are a couple of marvelous songs, like “Lifemare (Time to Wake Up),” that switch his formula completely. Mostly, however, he seems to have nailed one type of hip-hop music without much variation. His style will only fit certain artists throughout an entire album, but the right collaboration would result in some great music. This reviewer was craving something different, though, because the brief flashes of diversity are just as promising as the rest of the material.

According to the liner notes, Myron has completed over twenty solo instrumental projects over the last twelve years. He is clearly a professional, and as a small sample of his work, “Struggle” is excellent. From a quick listen at his website, www.sciencehillrec.com, it appears that some of his other work features that same deliberate, distinctive production. His talent is there, but I’d like to hear him flip the script a bit. Until he sees reason to, though, this music will do just fine. He comes from deep in the underground, and his music shows no hint of anything else to come. If you’re looking for something slower to freestyle to, or someone to lace your own work, Myron is a great alternative to the recognizable names around. He’s been slept on enough, and for no good reason. It’s truly sad, though not especially surprising, that Myron Mayhem has remained anonymous for so long.