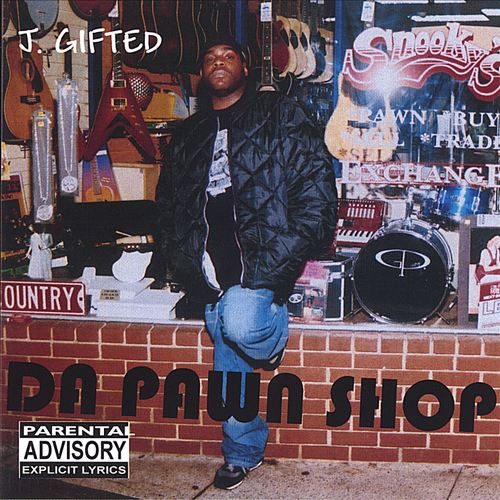 Appearances can be very deceiving. At first glance one would probably have low expectations of J-Gifted’s “Da Pawn Shop.” The cover art is simple, almost amateurish, and the track listing consists of a simple black on white layout with no decoration. But while the packaging surrounding J-Gifted’s album reflects the most minimal and basic form of art, the music found inside reaches towards the other side of the artistic spectrum.

Judging from the reference to Club Dream and the occasional use of the word “bama” I would assume J-Gifted is either from D.C. or the Maryland area. But the maturity and talent exhibited by J-Gifted is something that should not be limited to a local label or independent release. J-Gifted isn’t necessarily the next great emcee, but he definitely merits more exposure. “Da Pawn Shop” describes his album pretty well as what you find inside is a fairly balanced mix of merchandise ranging from the rough brags on “K.I.G. (Keep It Gangsta)” to the more heartfelt efforts on “Alwayz,” “I Miss U,” and “Little People.” Lyrically, J-Gifted handles his duties well song after song. On “Alwayz” he’s not afraid to profess his affection for his girl and he does it with heartfelt sincerity:

“What you want boo?
You got the world in front of you
Take your time, make your mind up, do what you wanna do
Express yourself, I’m listening
I’m hearing every word that your saying
It’s every night that I’m praying
I know we both been hurt before
Had our hearts in the dirt before
But this love will be much much more
Cuz when you lying here next to me
It’s like I feel some type of spiritual ecstasy
Electrically you satisfy my quest for life
I always new you’d be the best one to wife
Cause you know me like I know who you are
Cause I know you need your late-night Pepsi with your Mr. Goodbar
When we first kissed, it was like my first kiss
So per-fect, it’s almost like we rehearsed it, now this is it
No verbal abuse, fighting pushing or shove
You’re my world, you’re my meaning of love ma”

On “Little People” J-Gifted makes a song for the kids spitting:

“They say education is the key to success, and I agree
Cause right now you got a chance to get it for free
So when you learn your lessons take it for all that its worth
Because your time is limited on this earth
Let them gangs bang for turf
You just keep your head in the sky
And you can make it through the struggle kid, you wanna know why?
Cause I remember when I had dreams of fishing
Nine years old hoping and wishing
We had food up in the kitchen
With no big brother or sister to listen
Times were hard that’s when I tried to play God
By thuggin out, but then I lost my cousin Gerard
I know it gets hectic, quick with no electric
life’s cruel, but you don’t have to act a fool
And the gun don’t make a man, it only breaks spines
A real man thinks with his mind”

Though J-Gifted never gets verbally complex, he gets his point across effectively through his rhymes. Songs like “Keep It Gangsta” and “Stop Playin” do lean towards the gangsta element of rap, but once again J-Gifted is only conveying how he feels and what he has experienced.

Aside from being an emcee, J-Gifted also handles most of the production on the album, turning him into a double threat. For the most part the production is dope with only a few missteps. “K.I.G” has a slow-tempo funk that fit’s the theme of the song well and uses police sirens as part of the melody. The sweet soulful melody on “Yep” works well to set the mood of the track. Other tracks like “Stop Playing” and “Da Pawnshop” reflect an approach to beatmaking that is a mix of the different styles from DJ Premier type samples to West Coast and Midwest funk.

As with any album, there are a few bad tracks. The only track that stands out lyrically as outright bad is “Yep.” Though J.Gifted and the beat both come through, the female guest emcee is just pathetic with no real skill. The beat on “Round Nere” is a bit too simple with an undeveloped melody that sounds as if it was hastily thrown together. “Da Party” isn’t bad but it is upstaged by the current fare of party and club tracks being released. The only unnecessary track is the “Big Hats (Skit)” which adds little to the album, but thankfully that is the only skit J-Gifted has on the album.

“Da Pawn Shop” is really quite surprising. Usually locally released albums fall in the extremes of “underground” rap or “gangsta” rap, but J-Gifted manages to fall somewhere in between making an album that encompasses many aspects of everyday life. Some of his beats may need a little polish, but otherwise J-Gifted is exactly what his name says – a gifted emcee and artist. “Da Pawnshop” may not be his breakout record, but it is a solid release and definitely a step in the right direction. Hopefully next time we hear from J-Gifted he’ll be moving on up from the local pawnshop to a retail store near you.