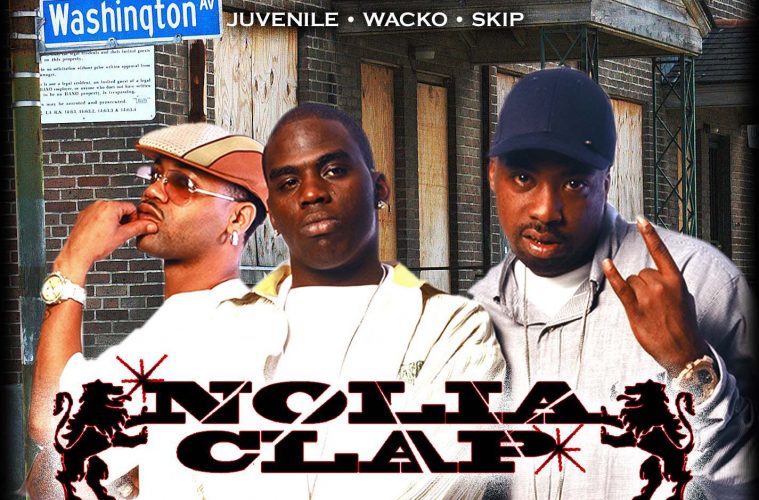 One of most energetic singles to hit out of the South in 2004 was “Nolia Clap,” a song recorded by Juvenile and his partners Wacko and Skip. The single was supported by a Juvenile-Wacko-Skip album called “The Beginning of the End” released May 18th, 2004 on Rap-A-Lot Records. While Juvenile’s on-again/off-again relationship with Cash Money Records continues to be something of a mystery (they released “Juve the Great” in 2003 but followed it with a weak “Greatest Hits” in 2004) what was abundantly clear to his fans was that Juvenile intended to take his new click, collectively known as UTP, to the top of the South and the rap world at large.

To say UTP’s “Nolia Clap” picks right up where “The Beginning of the End” left off would be a little misleading. While this release is more than a CD single, it’s less than a full album. Clocking in at just over 30 minutes with seven tracks, it’s close to being an entirely new EP of UTP material. Track #4 “Nolia Clap” may or may not be a version you’re already familiar with – “The Beginning of the End” had both an original version and a remix, but despite not being marked as such this is actually the remix that was available on that album:

Skip: “I’m straight Holly Grove ya know that
But I’m old school, Fisher Project, like a throwback
Now I told you, now you know that (ha!)
You ain’t welcome here, you ain’t see ‘I’m Gone’ on my doormat?
So stupid why (why) you ain’t abide by that?
If I catch you on my porch, you gon’ die by that (right there)
Right there, by them leaves, go and lie by that
Right side of that dog doo doo, you gon’ dry like that
This is payback (payback) for anyone who ever said that
‘Look I’m safe with this vest’ – gon’ get his head packed
Or get his face slashed, or his neck jooked
Look in my face… this how death look”

On the other hand track #7 is a “Re-Remix” that’s an all-star Southern smash featuring Bun B, Slim Thug, T.I. and Z-Ro among others. These two tracks would be worth the price of admission, but it’s worth noting that the album does offer even more tracks already available on “The Beginning of the End” in UNREMIXED format – “What’s Up” and “What’s Your Brains Like.” That’s not to say “Gangsta” featuring Red Eye or “Hurt Somethin'” aren’t good tracks, but the situation does need to be clarified a bit. In the end what “Nolia Clap” represents is an attempt by Juvenile and Rap-A-Lot Records to get away from the awkward and lengthy J-W-S moniker and repackage the group as UTP, which they are better known as in the underground anyway. If you already own “The Beginning of the End” you may not have enough incentive to purchase an album that’s almost 50% rehashed material, but if you’ve never checked out UTP before now this is a fine place to start.