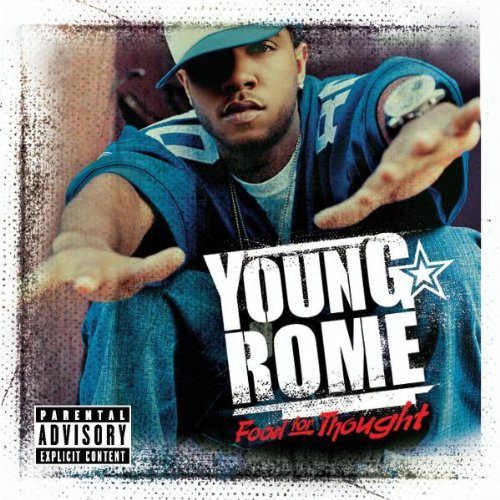 Before we get started, I’d like to offer a little advice to Universal Records. Frankly, I’m getting fucking sick of seeing your huge FBI warnings plastered all over the back of album covers and the top of compact discs. Why are you telling me that unauthorized copying is punishable under federal law? I’m the one who paid $9.99 – $15.99 at the store for the damn CD’s, just to review your artists on the website. It’s not like you’re comping me a promo copy, and it’s not like I’d bootleg it even if I did. More to the point, your warning is targetted at entirely the wrong audience. You’d be better served taking out ads in The Source saying remember, if you download music without paying for it, that’s a crime. You’d at least reach some POTENTIAL copyright infringers, instead of shoving your rhetorhic down the throats of the people who PAID FOR IT.

Okay, putting the “downloading music is a crime” issue aside, we have Young Rome. Does he seem familiar? He should. You probably remember him as Romeo from the cutesy cute little kid hip-pop/R&B group Immature. Wait, Immature sucked big fat cock. Why would anybody remember him from that group, let alone that group at all? Nevertheless his bio claims he’s all growed up, and Romeo ain’t so little any more. Now he’s Young Rome, and despite that entirely too kidlike name he’s actually 22 and legal to drink a brew. Maybe they should have called him Old Rome? Then his first album could have been called “The Parthenon” instead of “Food for Thought.” That’s a pretty audacious claim for somebody best recognized for a group whose lyrics were about as well developed as their name would imply. If you call your solo debut as a rapper “Food for Thought” regardless of your background, you better not leave my ears hungry and my stomach for hip-hop dying of starvation.

“I felt like I was in Saudi Arabiahhhhhhhhhhhh
There was candles and pillows, everywherrrre, yeah
She pushed me on the bed then climbed on top of me
Took her glasses off, then let down her hairrrrrr”

That’s the meal Rome serves up on “In My Bedroom,” and although some might enjoy this saccahrin sweet singing it just leaves me with a headache. Unfortunately half-assed rhymes and sappy sentimentality are the hallmarks of this release, despite Rome’s thugged out pose on the cover and the parental advisory sticker that went along with it. Just listen to the song “Sexapade” and Rome’s wannabe R. Kelly rap: “Baby you’re beautiful, your dress so provocative/but why the hell you gotta be so damn talkative?” Yes Rome, I guess that’s a problem when you’re immature – a beautiful woman wants to talk to you. I guess you’d rather have a whore instead, she’d just keep her mouth shut and fuck you. It doesn’t get better from there:

“Your story’s too long, your skirt is short
Your homegirl’s makin me dizzy smokin them Newports
And I’ve been drinkin, me and Marques bought the bar
And all the Henny ain’t makin you look like a superstar
Cause I ain’t tryin to wake up, flippin and mad
With a broad, who resembles, Donovan McNabb”

It’s good to know Rome is not only an insensitive prick, but shallow and insecure in his own manhood to boot. There’s really not much good to say about “Food for Thought,” so rather than beat Rome up for another three or four paragraphs let me sum up the numerous problems like this. Rome’s “whisper like LL Cool J rapping Phenomenon” flow is awful. He claims to be “crunk as hell” on “2 Step” while DOING a two-step. The best rapper on his CD is Guerilla Black, and he’s just a poor imitation of Notorious B.I.G. If you’re trying to seperate yourself from your boy-band roots, you don’t feature members of said group (such as Marques Houston) on two of your tracks. Now on the plus side, some of the beats are okay. J. Brown’s work on “I Don’t Care” is pretty crunk, and with the Youngbloodz making a cameo it becomes more their track than Rome’s. “Crazy Girl” is produced by and featuring Rufus Blaq (damn, I almost forgot dude even existed) might be the album’s strongest track, with a “Pass the Courvoisier” type swing to it. Still “Food for Thought” is an hour of my life I’ll never get back. I expected a three course meal, but all I got was fries and a burger, and Rome didn’t even give me an extra dime to put cheese on it.