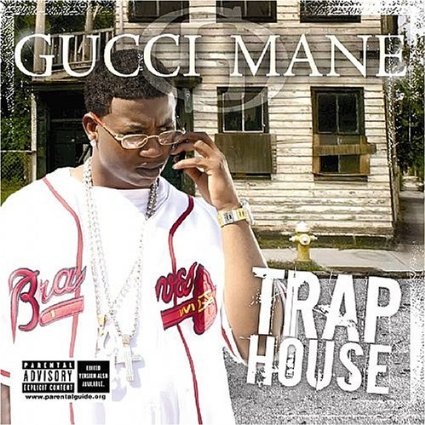 The most famous thing Radric ‘Gucci Mane’ Davis has done yet in his young life is be arrested for murder. Before May 19th the only knowledge the public had of Mane was the small amount of success his single “Icy” featuring Young Jeezy had found in some markets before the scheduled national release of his debut album “Trap House” on May 24th. Starved for any kind of press, good or bad, Gucci Mane’s people immediately sent out a statement touting that Mane had voluntarily turned himself in to face these charges; subsequently Mane and his attorney managed to post bail and get him out of jail just as the album hit stores.

There was a time in hip-hop music when such an announcement would be viewed as a tragedy – a young man set to make his name nationally throws away his opportunity and faces an uncertain future possibly including jail time. Instead it’s a sign of the cynical world that we live in that not only is this news fodder for a press release but viewed as the kind of publicity that could propel him to the top. While it’s true that there is a disturbing correlation between the success of rappers and violent gun-related crimes, most were the recipient of the violence. Tupac Shakur survived several attacks on his life, and with each failure the already highly talented artist achieved a more iconic status; his ultimate demise making him a martyr in many eyes and keeping album sales high well after his death. Notorious B.I.G. was already a worldwide rap superstar before he was gunned down and had been for some time. Even 50 Cent had risen beyond local notoriety with several singles like “How to Rob” before the attempt on his life nearly blew his face off. In short, rappers are the victims of their fame, not the perpetrators of the violence in an ATTEMPT to gain fame.

Recently the trend has swung heavily in the other direction. Whether they are truly innocent and being railroaded by the system or as guilty as their convictions would indicate, MC’s from Shyne to C-Murder to Pimp C to T.I. have had to do time for their crimes. The remarkable thing about all four is that being locked up has been no impediment to releasing a new album that appears in stores. While Gucci Mane’s album was already in the can before he wound up in the pen, it’s still telling that all parties involved used the timing of the incident to their advantage. One can only hope Mr. Davis was really not looking for more publicity via these means and that this is just a case of wrong place/wrong time or at the very worst self-defense. When the smoke clears from this incident the debut album “Trap House” still remains as the TRUE platform for Gucci Mane to achieve his success, not these unfortunate charges. Clocking in at 18 tracks including an intro, outro and several skits, this full-length release puts both Mane and Big Cat Records on the map. The latter clearly has big plans, as they even put an ad for an upcoming album by Magic and a “404 vs. 504” compilation underneath the clear tray on which Mane’s CD sits.

Now as for the artist himself, the sad truth here is that there’s not much to write about other than his arrest record. Mane follows in the recent tradition of debuting Southern rappers whose rhyme schemes are overly simplstic, accents are extra thick, and beats are incredibly uninteresting. Even the lead single “Icy” has a barely passable beat by Xavier Dotson, p.k.a. “Zaytoven” according to the liner notes. I’d hold off on the comparisons to Beethoven just yet if I were him – a simple series of electronic beats and beeps does not a maestro make. Neither rapper in the song has anything interesting to say, but Mane comes off half as clever as Jeezy, who at least manages a semi-clever reference to Ginuwine in his opening verse. Mane has nothing:

“She diggin my fit, she think I’m the shit
Is this a chain on my neck, or the watch in my wrist
Maybe the ice in my ear, or the brace-eh-let
But she look like the type that could take a dick
Uhhhhhhh… young Gucci Mane
Don’t kiss me baby you can kiss my chain
Uhhhh – ya gotta be a dime piece
just to look at the rocks in my time piece”

The lyrical critique here is not just of the inane materialistic content, because that type of material is so prevalent in today’s hip-hop anyway and there are some who do it well or at least have enough charisma to make it interesting. Mane is charismatic and not completely unpleasant vocally, but adding an extra syllable to the word “bracelet” in order to rhyme it with “take a dick” insults both your eardrum and your intelligence. Furthermore after a certain amount of time one has to question the quality of chicks these “iced out” rappers pull, when they look like tens on the outside but are so vapid on the inside they only care about how much sparkle you wear. It’s not as if this song is an exception to the rule and Mane offers more profound wisdom elsewhere on his album. Rather this song is the height of what are otherwise a string of lyrical lows. Here’s another example of how clever Gucci Mane is: “Don’t let yo’ mouth write a check that yo’ ass cain’t cash/I’m the lawnmower man, and yo’ ass is grass.” That might have been clever back in 1992 but it’s heavily dated today, and the fact it’s the hook of a song NAMED “Lawnmower Man” isn’t helping. Here’s some more of Mane’s talent on this track:

“Uhhhhh, I’m from the hood I’ll punch ya lights out
… I took your jewelry, now I’m iced out
(icy icy) Gucci Mane got that ‘caine in
(I ain’t got no bricks) I swear I never tuck my chain in
… You just a thug in trainin
… I’m a thug entertainin”

No Mane, you’re not entertaining. The closest this album gets to entertaining is a parody of Dem Franchize Boyz “White Tee” entitled “Black Tee” that features Bun B, Lil Scrappy and Jody Breeze among others – and while the talent on their version is better the Franchize Boyz still win for having a better beat than the one Zaytoven provides here. I’d like to say Gucci Mane has a bright future in front of him as a rapper if he beats the charges, but songs like “Damn Shawty” contradict the statement with ridiculous lyrics like “Shawty got an ass on hurr, I’ma put my hands on hurr, I’ma spend a couple grand on hurr, I’ma pop a rubber band on hurr.” Much as I knocked Mike Jones in a review a few weeks ago, one has to give Jones credit for three things: more interesting beats, better hooks to his songs, and a gimmick that’s memorable no matter how ridiculous it might be. Gucci Mane has none of these things going for him. His only gimmick right now is his infamy, and even that won’t last when people see how vapid his music is.