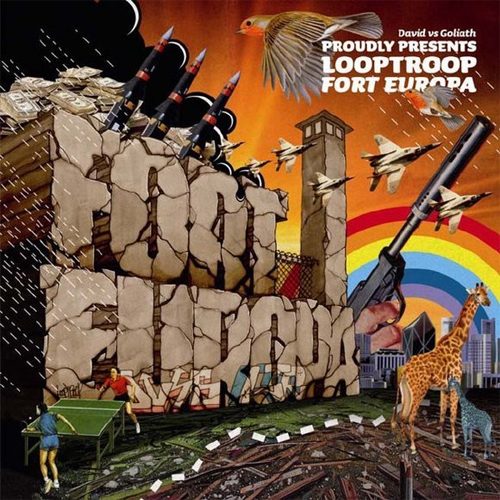 Not since the days of London’s Hijack has there been an Anglophone European hip-hop crew that has been as widely present as Sweden’s Looptroop. Their new album, the third in five years, sees the foursome briefly paying tribute to Hijack, rap’s original Terrorist Group. A fact that might be lost on most listeners, given the almost 15 years that have passed since “The Horns of Jericho.” But your trusted RapReviewer spotted it in no time, the familiar “the-the terrorist group” bit in the song “Trrism.” But terrorism in 2005 is a highly difficult topic that calls for a differentiated approach. In Looptroop-typical systems thinking, “Trrism” not only stands for ‘terrorism’ but also ‘tourism’, as they contrast the third world terrorist on his deadly mission through enemy territory with the tourist “EasyJettin’ down here with his dirty tourist dollars / neocolonizin’ the poorest islands.” This clash of cultures results in one of the most intriguing concept songs I’ve heard in quite some time, especially since the lyrical detail work doesn’t obscure the moral of the story. While sympathizing with the suicide bomber, Looptroop urge us to forget the “minor differences” that seperate us and to remember the “major similarities” that we share: “What’s the difference, what’s the similarities? / We all search forgiveness, search for inner clarity.”

There may be few hip-hop acts as heavily politicized as Looptroop, yet unlike many of their like-minded peers and predecessors, they don’t deem it necessary to burden their message with much militant baggage. Similar to American rap activists Talib Kweli and J-Live, they make uplifting music for the downtrodden. If Looptroop possess any kind visual image, it’s probably split even between Mattias Lundin’s colorful artwork and rapper Promoe’s Viking-meets-Rasta looks. Philosophically, Looptroop represent the politically and socially aware segment of global youth with leftist leanings. In regards to Europe, their concerns would evolve around the negative aspects of globalization, the worrisome state of the ecology, or the resurgence of the extreme right. One person in particular can be made responsible for waking up young people around the world to global politics, and that’s George Walker Bush, the 43rd President of the United States. It almost sounds like a term of endearment when Looptroop refer to him as “Hurricane George,” but we all know the outcome when George comes ravaging:

The best way to imagine “Hurricane George” is five Swedes gathered around a campfire somewhere in the Scandinavian woods, chanting the above chorus and taking turns to mock and attack the American President in his own language (while producer Embee figuratively strums the guitar and strokes the congas). Like everyone else, guest rapper Chords keeps his segment short but stinging:

Thankfully, Looptroop ride the anti-American bandwagon for only so long. “Unilateral Communication” with its “one nation under a god is one nation acting as god” argument is likely also aimed at the US, but is ultimately a song about a world where all the sophisticated telecommunication devices and public marketing strategies can’t hide humanity’s failure to communicate. While Dubya is almost too easy a target, Looptroop should be commended on finding the time to mind their own business right here in Europe. As the continent grows closer with more and more countries joining the European Union, its borders are closing up dramatically, making it increasingly hard for refugees and immigrants to be accepted. Many lose their lives while trying to reach the promised land, while Fortress Europe has become a household term that describes the Europe of big business and political hardliners that many of its citizens oppose, among them apparently Looptroop:

“We built up and tore down the Berlin Wall
only to build a new and improved around our crumblin’ Fort (Europa)
This one was a bit tricky, not visible to the naked eye
and if you was lucky
you could slip through the cracks and the crevices tuckin’
your life under your arm, this way some people snuck in
only to become second class citizens”

While far from being the final word on the state of the European Union, “Fort Europa” is a strong statement on behalf of those who are left on the outside looking in. Detecting “nothin’ but claustrophobia / right here in Fort Europa / nothin’ but xenophobia,” Looptroop take on the same perspective: “I’ll stay to see through the peepholes / cause people like that is all we know.” For Looptroop, this kind of committment is not confined to a couple of tracks. You’ll encounter it on the majority of the songs, their deep resentment of the “twenty-one century lifestyle western way / where the best gets paid / and the rest get slayed,” “a world where the winner takes it all / and happiness only appears in sitcoms.” The crew’s own ideal isn’t particularly new or original, but it’s an ideal music has always been known to defend – love. Love, which they alternatively openly celebrate, as in “Sparkplug,” or let shine through as a ray of hope, as in “21 Grams,” a somber track that builds on the premise of the movie _21 Grams_ (that supposedly “we all lose 21 grams at the exact moment of our death”) which leads Looptroop to do a little soul-searching of their own. Supreme:

“Some people carry the weight of the world on they shoulder
with so much grace you pray for them not to fall over
Some fold under the pressure, depressed by heavy drugs
Some get the load off they chest with lead slugs
Some let they best years pass stressin’ for tons of cash
then pass away with nothin’ but 21 grams
And some believe FOX News, some in religious rules
Like entrance at the pearly gates was for us to choose?
Some wanna control my body and soul
so they told us we could never make it on our own
Some wanna be picture-perfect amputees
Weight-Watchin’ anorexics blinded by TV
Some can’t sleep cause a poundin’ heartbeat
remind ’em how milligrams to the vein would make the pain leave
Others walk lighthearted till the day they drop
We’re singin’ All You Need Is Love, but all we got
is 21 grams of soul”

The question whether European hip-hop needs Looptroop calls for an emphatic yes. With “Fort Europa,” the crew affirms its status as a role model for pan-European rap music. Whether the rest of the world is “ready for these Swedes” who plan to “conquer the world as we speak,” remains to be seen. Even if you generally favor politically charged rap, an invitation like “Where my feminist men and women is at? / Come on, put your hand where the limit is at” might still catch you off guard. You’ll probably have to look long a hard to find anything that remotely resembles a ‘feminist man’ in hip-hop, let alone one that is willing to acknowledge it. Personally, I might feel compelled to come out of that closet, but I’d much rather talk about where the real problems lay with “Fort Europa.”

The oddest part about this album is the contrast between grave subject matter and playful execution. “21 Grams” is one of the few beats that possess any kind of gravitas. Almost completely ignoring the dark end of the sound spectrum, “Fort Europa” rides on a happy wave that at times feels irritatingly out of place. “Rainbow Faces” is meant to be uplifting and definitely succeeds, but is about the only exception from the rule. “Chana Masala” is a disgrace to the Indian plate of the same name, a stiff track always on the verge of stumbling, climaxing in a horrible hook going “DvsG’s, and you cannot fuck with us,” turning the David vs Goliath Records abbreviation DvsG into some odd double entendre (“Devious Gees”). “Unilateral Communication” is representative of tracks whose beats sound strangely detatched from the content. Most notably a misguided trilogy scattered across the album (“Trinfidelity,” “Trinsanity,” “Trincest”) revealing some dark family secrets, which pairs bland beats with highly emotional encounters. Even worse, the gleefully thumping “Carneval” degenerates from a nice touring track into a weird episode that involves babies being eaten alive, apparently to illustrate how the world eats its young and to make some lame wordplay on the song title. By the time the album winds down, you’ll be left with the feeling that few rhymes here were written with a particular beat in mind, and few beats were programmed with a particular lyrical theme in mind. If you have three experienced rhyme writers and an accomplished beat programmer, that can only be considered as a failure.

After 2002’s highly accessible “The Struggle Continues” album, the slightly irritating “Fort Europa” is prone to expose Looptroop’s weak spots. Rappers Promoe, CosMIC and Supreme sound all very similar. Their vocal tones often lack the depth to cover the full range of emotions their songs touch upon. None of them adds an instantly recognizable touch, apart from Promoe’s trademark reggae-tinged hooks. (By the way, fake Jamaican patois is so late ’80s it’s not even funny.) Also, the American influence can become overbearing, from plain ebonics to particular terms they most likely picked up while listening to hip-hop. While that may be the standard proceedure throughout hip-hop history, it’s likely to be used against them by anyone who has reservations about a Swedish group rapping in English, even if you do it as well as these self-described “true school globetrotters.”

What I personally am more uncomfortable with is that like many of their contemporaries, they get caught up in multisyllabic madness. What’s the use of rhyming “St. Petersburg” with “bleeding world” when it trumps the intended effect and only sounds clumsy? Despite these flaws, Looptroop have developed certain skills many a US rapper could envy them for. They come up with original flows that really fit the respective beat. They’re able to write from different angles. Their songs have substance. They’re not scared to show emotions. They harmonize incredibly well, at least the rappers. By himself, Embee is a top-notch producer whose quality beats have come to define the positive spirit that drives this crew. (His album intro is pure genius.) Even if they may not always be executed to complete satisfaction, songs like “Night Train,” “Hurricane George,” “Rainbow Faces,” “Fort Europa,” “Heavy Rains,” “Trrism” and “21 Grams” represent catchy, ambitious, dedicated 21st century hip-hop, European or otherwise.