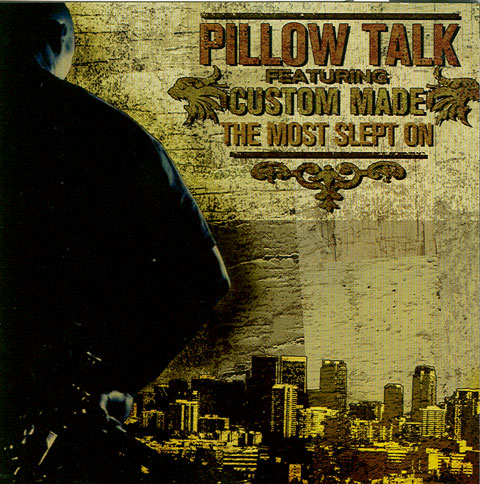 Through potentially unintentional complacency, Custom Made has taken a slight step back with their new record, “Pillow Talk.” Their previous, “LA State of Mind,” was a concise and finely crafted album that didn’t try to do too much, but never took a wrong step. The slightest tweak is always needed or any following material will taste stale, which is something that has doomed plenty of artists before. The temptation is understandable, because a successful album would suggest that the people want more of the same. The fact remains, however, that the lack of growth exhibited on “Pillow Talk” is disappointing considering the potential that the crew showed on “LA State of Mind.” Much of the material seems to have been recorded before the previous record was released, which begs the question of why they would release this stuff at all.

All is not lost here, because despite excessive length and a bit of filler, “Pillow Talk” is a solid effort. The cover reads “Pillow Talk” featuring Custom Made, and below that says “the most slept on.” This is quite possibly true, because their debut was a great album that got almost no publicity. The new album is not officially a Custom Made release, because there are contributions from friends and artists they have collaborated with. Additionally, in an odd choice, there are three previously released songs that have been remixed by Skandalous Scoobs with spotty results. Cormega’s “Killaz Theme” with Mobb Deep is flipped over a moody, rhythmic beat, but the reality is that Havoc’s original haunting production fits the murderous rhymes better. Jedi Mind Tricks and Kool G Rap lend their original vocals from “Animal Rap” to a remix that fares much better, as Scoobs cooks up a track that is easily worthy of Stoupe’s atmospheric samples. The third, “R.E.C. Room Revisited” by Inspectah Deck, is remixed with strings that don’t quite fit with the Rebel’s verbal gymnastics, and anyone who has heard the original will definitely favor it over the one found here. These three remixes sound nice, but are pointless when surrounded by the work of Custom Made. It seems that Scoobs just wanted some big-name firepower on the disc.

Aside from these disruptions, there is plenty to like. “Introduction 2 Tha Illest Function” opens things up, though Art-Of-Fact’s operatic production is a bit clichÃ©. “The Real,” an Aneek solo joint, features Scoob’s best work on the disc, as he lays a slick and catchy beat with horn flourishes that is an ideal vehicle for Aneek’s standard but functional braggadocio. Overall, out of the eighteen tracks, Scoob mans the boards for twelve of them, and his work is mostly superior. There are moments during which he seems content churning out a piano loop and hard drums, and the beats are not as tightly wound and memorable as some of his other work. Custom Made and their extended family struggle with their rhymes, because there is an excess of trash being talked and not enough words of consequence. It has begun to take a truly charismatic voice and some serious style to pull off the whole thug act, and none of the crew is good enough to float along on gun-talk alone. Because of this, and since Scoob and his cohorts cannot carry the disc from the production side, “Pillow Talk” starts to drag a bit in the middle.

Chicago’s Infinito 2017 donates a track from his 2002 album “Music With Sound Right Reasoning,” which is an odd inclusion amongst all of the songs featuring combinations of members of Custom Made. There appear to be a couple of these songs which don’t actually have anything directly to do with the group. This is quite similar to the remixes, both of which are a bit out of place on a Custom Made album like this. Infinito brings a more personal touch to the rhymes on “At Night I Can’t Sleep,” however, which is something that the others could probably learn from this time around. Original member B-Love continues to separate himself from the crew, and he has clearly been blessed with a raw lyrical talent that can’t be taught. “I’m Only A Man” has Scoob using the same sample as Alchemist on “Worst Comes To Worst,” which ruins the song’s replay value to those who are familiar with the Dilated Peoples. Regardless, B-Love rips it on his only solo song.

Judging from the back cover of the jewel case, the individual songs in this collection were made between 2001 and 2004, which might explain why some of the material is sub-par compared to “LA State of Mind.” This record could certainly be categorized as a mixtape, and as mixtapes go, it is quite standard. There are gems to be found between one and eighteen, but some searching is required. There is nothing weak, but some of the songs are poorly conceived and the album as a whole could have been tightened up a bit. There appear to be three types of song here: Custom Made songs, contributions from acquaintances or extended crew, and remixes of established modern classics. The mixture of these three makes for quite an odd record, and though nothing will require an exercise in track skipping, “Pillow Made” is not a step forward, and therefore could be considered a step back for the crew. Hopefully this is only a practice session to prepare for a new full-length. If not, it will do fine, but they are capable of much better.