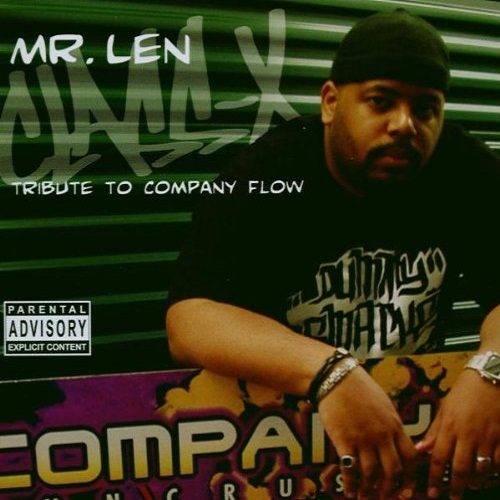 This review could potentially have gone into the Back to the Lab vaults, given that it has a 2003 copyright date on the back. On the other hand I had never heard of this record before last week, when I stumbled into it at a Pity the Fool” proved. Len stayed behind the boards putting his musical skills to the tests while rappers like Jean Grae and Q-Unique provided top notch lyrical flows. For some reason though Len felt compelled to release this record, a compilation of obscure Co. Flow rarities, obscure remixes and previously unreleased tracks. Len has at times been known as the Space Ghost of hip-hop, but it seems like he is the one haunted by the heights of underground fame he reached while teaming with Big Juss and El-P.

For those who felt dissapointed by the fact Company Flow only managed to have two mass produced CD’s (one of which was an all-instrumental affair) this release will ease their pain. The dopeness of the material is variable though. While “Juvenile Techniques” is interesting from a historical perspective as the first official Co. Flow track, it’s just not that hot. “People are Shady” is an El-P produced effort that Len writes in the liner notes was too old to be included on “Funcrusher,” but it sounds like it would have fit in there or on the updated “Funcrusher Plus” nicely. As much as I like “Fire in Which You Burn” though, the extended version’s “intro” adds nothing to the track and actually keeps you waiting too long for the musical dopeness. Most hardcore Co. Flow fans will have already heard the Indelibles song “Weight” from Lyricist Lounge Vol. 1, as well as the Sole diss song “Linda Tripp.” That’s not a negative though as both tracks are type nice, especially the latter’s haunting musical backdrop and some of the all-time funniest snaps ever put on wax:

“I am Captain Kirk, Spock and Lieutenant Uhura on the away team
You’re Henson Lebowitz – the sacrificial lamb for the episode
You beamed to the wrong planet this time, wth a hot pink phaser and one line
before getting morphed into faggot dust, for not knowing my status
Automatic and absolutely the poisonous shit-licking one cypher reject
New England rich boy soon to catch a Bay Area eject
Marionette pussy non-veteran; I got more friends than you where you live
Menopause/Men-all-pause when I stop that flow of estrogen
You wanna be on the cutting edge–sliced up; emotions knifed–life sucks
Feeling dejected when frustration is misdirected in official election
Conjections on top of blaming misinformation textures
So inane–I cause colon blow pain
You have an obsession respect it
From now on you’re immortalized playin yourself on my record
Congratu-fuckin-lations; isn’t that what you wanted– IDIOT!!
There’s more than a little difference between yours and my existence
This is my ride; and your not commadering it
The only thing advanced about your music is that you need a computer to hear it
This year you’re independent; last year you on some keep it real shit right?
The last year before that you discovered hip-hop
and you immediately became an internet genius
Fecetious pseudo-intellectualism can’t contest wisdom
I feel like Selena; the president of my fan club trying to kill me”

Other gems to be found throughout include an unreleased remix of the Company Flow single “End II End Burners,” a Mr. Len and El-P co-produced stripped down drum track throwback called “Stupid Robot,” the original 12″ version of “Info Kill” replaced by a remix on “Funcrusher Plus,” and even though it’s not listed as unreleased I’ve never heard “Krazy Kings II” before. Len writes in the liner notes that he couldn’t view El-P and Big Juss as “just MC’s” any more after hearing this record, and you may be inclined to agree. You can’t fault the selection of Company Flow classics that were included on this record either – the Soundbombing 2 classic “Patriotism,” the graf writer tribute “Lune TNS,” and of course the immortal and timeless dopeness of “8 Steps to Perfection.” Even eight years after “Funcrusher Plus” the eerie melodic backdrop, pounding drums and lyrical flows of El and Juss on this song send chills down my spine. There was a feeling listening to this song that the dimensions of hip-hop had been forever changed and that what was possible was no longer limited to two dimensions. Maybe for that reason it’s understandable why Mr. Len IS still infatuated with the legacy of Company Flow, because even though their time as a group may have been short the impact they left behind was as deep as a dinosaur killing meteor.