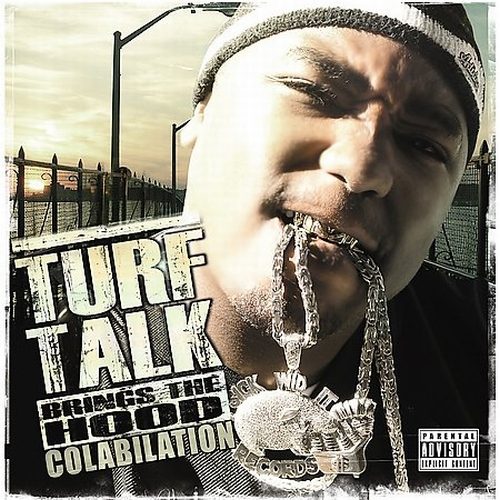 It’s only appropriate that E-40’s heir-apparent would be named Turf Talk. After all, Earl Stevens has built his career on flipping his own brand of street lingo, and as his name implies, Turf Talk is here to do the same. After scoring a Bay area hit with “Slumper” off his debut album “Street Novelist,” Turf Talk has decided to use his newfound fame as an opportunity to connect with the Bay area’s most talented emcees. This “colabilation” is a compilation of collaborations featuring Turf Talk. Despite featuring over 25 different emcees, not including Turf Talk himself, “Brings The Hood” has turned out to be one of the best Bay area CDs to come out in a while and a cohesive representation of what the Bay area is all about.

The production on this album is handled mostly by Troy Sanders, and though the name is new to this reviewer, judging from the quality of the beats Troy is a seasoned veteran. Throughout the years Bay area music has built a reputation of funky and hard hitting bass-lines that serve as the centerpiece of every song and Sanders continues this tradition. The murky bass of “We in the Streets” is complimented only by a high-pitched string cascade, but it’s all that is needed as the bass carries more than it’s weight on the track. “Hustle Wit My Nine” features a more upbeat arrangement from Sanders, with fast-paced strings and a piano sample that complement them well. Tone Capone shows up for “Don’t Get 2 Pieced” with a knocking beat that would be at home at any party or club were it not for the song’s gangsta content. Droop-E drops in for “Turf Talk Is Back” with another tight bass-line and a funky horn arrangement that is sure to be knocking in cars for months to come. Each track could basically be described in the same way, a combination of tight bass lines and sparse samples that is sure to please anyone’s ear. The only song that might miss the mark for some is “Down The Block” as the melody is a high-pitched take of “Mary Had A Little Lamb,” but while I too was initially skeptical, one play in the car and it too was a certified slumper.

Lyrically, Turf Talk himself is actually a gifted emcee as he drops lines that make you hit the rewind button to confirm you actually heard what you just heard. But the truth is that the emphasis of Turf Talk is not what he says as much as how he says it, the boy has style. He doesn’t possess as much skill as E-40, but he comes close. If somehow Turf Talk doesn’t impress you, you’re sure to find at least one emcee worth peeping on this album. E-40 shows up for 2 tracks and is his usual self, especially on “Turf Talk Iz Back.” The way E-40 flips the hook on that track is amazing, as what would have been a tongue twister for anyone else sounds like a walk in the park coming out of his mouth. Lyrically Droop-E has a strong showing, which is particularly impressive considering his production is also on point. Style-wise, you can take your pick from any of a number of emcees, including Celly Cel, PSD, and The Federation.

This album could have easily been called “Turf Talk Brings The Bay” as this compilation is one of the best to drop from the Bay in recent memory. The hard-hitting production is sure to please any fan of tight bass-lines, but is constructed well enough to sound good in headphones or even clock radio speakers. Even if your system can’t fully handle the funk bass contained here, you’ll find plenty in the lyrical content to validate your purchase of this CD. Though they never fell off, Sick Wid It has definitely found a new star capable of putting them in the national spotlight yet again. Even if Turf Talk doesn’t manage to bring his hood to yours, he’ll surely still be making bumping music for years to come and rap fans will be fools to ignore the talk from his turf.