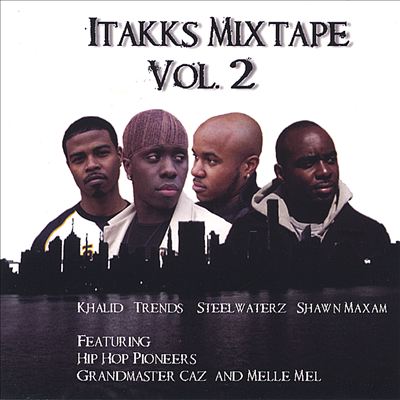 This is pretty horrible. I wish I could figure out the function of these “jackin 4 beats” type mixtape affairs, many of them being egotistical vehicles for artists to saturate plastic discs with subpar throwaway verses and redundant punchlines that would have no place on a full length record. It’s even more confounding when independent, heretofore-unknown artists choose to traverse that path, spouting amateurish rhetoric over beats that have already been exhausted by a host of more accomplished artists. Itakks’ second mixtape, to their credit, features a small selection of beats courtesy of in-house beatsmith Steelwaterz and thus suggests that they have exerted some effort in conceiving and executing this project.

This would, of course, be commendable if Steelwaterz’ compositions actually offered some promise. “Hustler” sounds like a horrible take on Jay/Cam’ron’s “Welcome To New York City,” “Move” is a sped-up rock sample that somehow manages to strip all the propulsive force of the electric guitar and kick drum, sterilizing them by filtering them with rap sensibilities, while the other compositions range from drab to unnerving. To his credit, Steelwaterz is working with a pretty cool drum sound here- the kicks sound full and bold and the snares don’t sound quite as digital as a lot of today’s aspiring producers. One could only wish that the drum sound and quality of the mix could be supplemented and cohered through more interesting beats.

It is in the lyrical content and delivery that is truly excruciating here- the requisite braggadocious bravado, misogynistic machismo (“If a chick don’t like me, she must be gay or dumb”) and violent posturing (“Come out yo’ mouth and you will get snuffed”) dominates here, and Khalid/Trendz both lack the wit and disarming charisma that would render the redundancy of their content irrelevant. Instead, they brandish competently metered styles that are comprehensively hampered by the sheer inanity and blunderingly predictable, self-important posing that typifies their lyrics.

This is pointless and hopelessly boring. There are moments of promise in Trends’ delivery (particularly some of the structures in “Favorite MC”) and in Steelwaterz’ production (“Move” would have been VERY cool if it sounded grittier and less rap-friendly), but ultimately, I find nothing redeeming on this disc to offer a recommendation. Avoid.