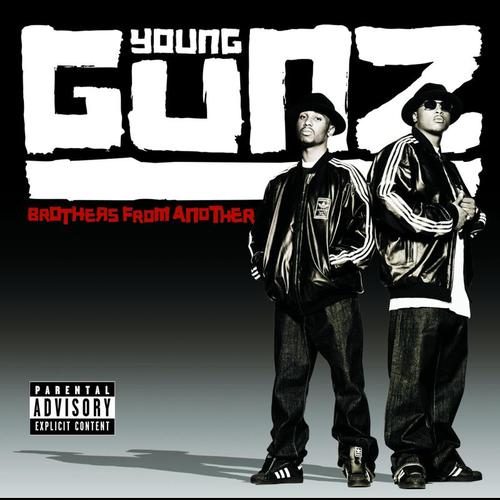 Young Gunz :: Brothers From Another

A year and a few months after releasing their national debut “Tough Luv,” the self-described Young Gunz of the Roc-A-Fella Records family are back again. Chris Ries, a.k.a. Young Chris (or just Chris these days) and Hanif Muhammad, a.k.a. Neef came straight out of Philadelphia with the street sensibility of Beanie Sigel and the crossover appeal of Will Smith. Their surprise smash hit “Can’t Stop, Won’t Stop” surprised audiences with it’s stripped down beat and 80’s throwback style chorus, proving that even in hip-hop everything old is new again. I hear that Kangol hats and Troop jackets are going to make a comeback too. Seriously, the most surprising part was that such Young Gunz could come with such a professional and polished project with a vintage appeal.

Obviously the tutelage of being in the Roc fam and under Jay-Z’s wing definitely had a positive effect, and “Brothers From Another” continues in that direction. Their touch for pop crossover appeal rap has if anything gotten better, as their silky smooth “Don’t Keep Me Waiting” featuring 112 is bound to tear up the charts. Chad ‘Wes’ Hamilton even manages to hit them off with more old school in the production, complete with a Luther Vandross “See Me” sample. He does even better on “Don’t Stop (YG Party)” though with a series of percussives that would make even Rick Rubin jealous and LL Cool J want to “Rock the Bells.” It’s not all pseudo-80’s production though. Kanye West drops his distinctive sound and guest rap vocals on “Grown Man Pt. 2,” which also features John Legend singing on the chorus – another sure-fire radio hit. If that song doesn’t make it, “The Way it Goes” definitely will:

“Everything changed, now the chicken be naggin
Listenin to her girlfriends, now she wantin more ends
Takin out my Benz, scrapin up my rims
Every other weekend she out, girlfriend be clubbin
Went from somethin to nothin, now she huffin and puffin
Cause a nigga be frontin, and I got her up all night..”

This track and “It’s the Life” feature an MC named Pooda Brown, although other than his ridiculous name there’s nothing really noteworthy about him. It’s Chris and Neef who hold things down throughout, from somber tracks like “What We Gotta Do” to up-tempo braggadocious cuts like “We Still Here” featuring Memphis Bleek. It can’t really be argued that either of the Young Gunz have evolved into more profound rappers or more complex lyricists, but neither have they devolved into self-parodies or hip-hop cliches. They still present an interesting sound which seperates them from the rest of the overcrowded hip-hop market, and with Roc-A-Fella behind them giving their CD a push “Brothers From Another” should prove to be as successful as their last disc.