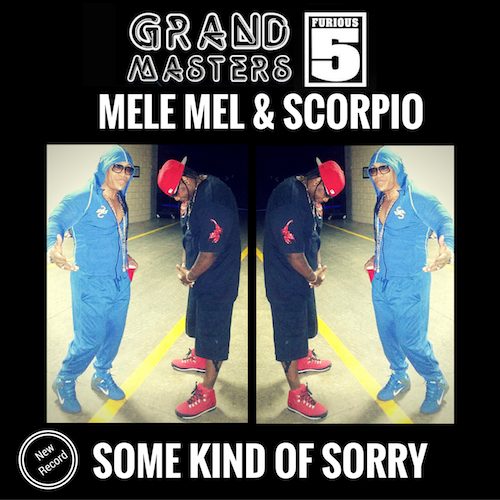 There was a time at RR where I did a regular column reviewing singles, but owing to the sheer number of albums shopped to us for coverage (then and now) this eventually fell by the wayside. Thus when I opened up the zip file for “Some Kind of Sorry” by hip-hop legends Melle Mel and Scorpio (of Grandmaster Flash and the Furious Five fame) I was actually thinking I’d be reviewing a short EP. As it turns out the zip was actually filled with publicity photos and one song – “Some Kind of Sorry.” There’s no instrumental, radio edit, or anything else in the folder other than one song.

Rather than abandon the review though I decided to delve into this song because of a dispute between Melle Mel and Grandmaster Flash, which is one of the reasons this song has the curious artist name of “Grandmasters Furious 5 featuring Melle Mel and Scorpio.” To paraphase what Melvin ‘Melle Mel’ Glover has had to say about it, Flash has monopolized the use of their name to his own profit when (in his view) he never even did any of the heavy lifting back in the 1980’s to make it a success. In that context the song can actually be read as a diss on Flash, with repeated demands for the story’s antagonist to “apologize.”

“You rode it like you was a horse with no remorse.”

If you just got a good look at Mel’s biceps (and the press kit had plenty) you’d probably want to just hand over the name “Grandmaster” to Melle Mel and not even have a feud over it. He looks more swoll than most pro wrestlers! Apparently it hasn’t worked out though, and since this song is a coded “message” to Flash, it doesn’t seem like this beef has been settled since Mel and Scorpio were interviewed about it over a year ago. That beef has at least tied this song up in limbo though since it’s finally scheduled for digital release three days after this review. I wish I could say it’s got me excited in a nostalgia kind of way for the early 1980’s sound of Melle Mel and Mr. Ness/Scorpio that I grew up on, but (with apologies) it actually sounds like cheesy pop music. There’s none of that “Don’t push me, cause, I’m, close to the… edge” intensity here. There’s a whole sung chorus about rainbows, poison arrows, and sparrows. I’m not exaggerating. The song I actually wish was in this zip file is their 2015 remake of that classic. You can watch it below.

Out of respect for these pioneers and the fact that this is only a one song press kit, I’m going to refrain from a “score” as such. I can only say that when they go on tour this year I hope they aren’t banking on their new material as the draw.