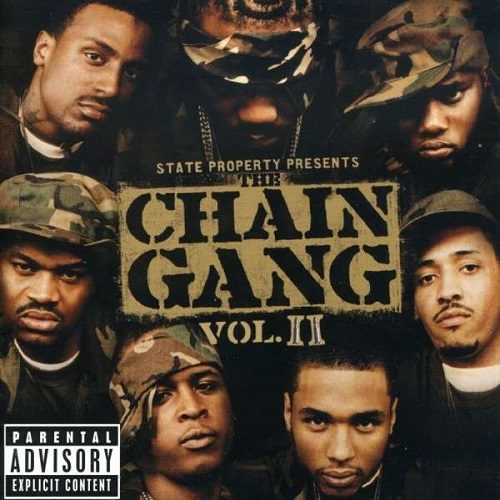 You might have assumed “State Property” was a one time thing, but Beanie Sigel is back with mo’ bling. The last venture was billed as a film soundtrack, even though “direct to video” is the most complimentary thing one can say about it. In fact there’s no doubt that of the two, the soundtrack was the only joint worth copping for home entertainment.

“Beans” may be a lot of things, but he’s nobody’s fool. Why invest hard earned funds in a movie nobody wants to see when those ducats can go straight to the music people really want instead? So this time out, don’t bother to look for “State Property” in theaters or as a rental at Blockbuster. Bypass both and go directly to your local record store if you want to see and hear more of Roc-A-Fella’s crew: Freeway (now a star in his own right), Oschino & Sparks, Chris & Neef (a.k.a. the Young Gunz), and newcomers Peedi Crakk and Dirt McGirt. You might know the latter better as Ol’ Dirty Bastard. No joke. Big Baby Jesus is now rolling with the Roc.

By now, the single most people have heard off this compilation is the Young Gunz track “Can’t Stop, Won’t Stop.” With interpolations of “Overweight Lover in the House” and “Superrappin'” in the mix, it feels a little bit like a throwback to the old school. Darrell ‘Digga’ Branch’s beat accentuates this feel by being the kind of stripped down beat Rick Rubin would have produced for LL Cool J on “Radio.” Both rappers shine brighter in this format, with Chris in the role of smooth playa and Neef as the hot upstart just waiting to get his shot – literally:

“No, no, don’t make me the bad one
Then negotiate when the man wit the badge come
You know the rules when a nigga was yappin
Ain’t no rappin, when we see ’em we clapp ’em
Plastic bag ’em, then we findin a ditch (yeah)
Toss the magnum, then we findin his bitch (yeah)
Then take a step over the shit we left over
Now I gotta go and tell my niggaz what happened
Niggaz better believe, we the youngest in charge (yeah)
Ain’t takin a deal man, I run wit a charge (yeah)
Chris and Neef, we runnin this rap shit
State Property poppin anyone of you bastards”

It’s a nice way to set off the compilation, but Sigel and Jay-Z take over on the lushly produced D. Dot track for “It’s On.” It’s so good, Hova probably should have saved it for “The Black Album” (tentative release date: November 28th). Sig’ is straight off the streets per his usual style, but Jigga’s straight out the boardroom:

“Since you was a baby coward
We been sprinklin the world with baby powder
+So Fresh and So Clean+
Been a OutKast since I was a teen
But I outlast cause I outblast anybody you bring
Young, you got it the prophet I told y’all niggaz
Then I showed y’all niggaz you +Can’t Knock It+”

Momentum slows down a bit on “Temporary Relief,” a duet between Peedi Crakk and Sparks. Their rhymes are nothing spectacular, and Boola’s beat does nothing for them either. Crakk tends to use played out similies – “caliente, lle’ bubble like hot lava” and played out trash talking – “half-black, half-hispanic, you all faggot.” Sparks would be better off by himself. Freeway shows him how to do this (son) on his Bink produced track “Rolling Down the Freeway.” The symphonic backdrop gives a tightly wound Free energy for his sing-song style:

“Close your eyes, I can take you to the hood B
Closer than you could be
Bumpin the, hood chickens with enticin looks that pack 9’s
Half the hood niggaz roll with shotties
Other half gotta watch they bodies
From the niggaz with the black mask, snatch cash, fuck the lottery
Either strong arm robberies or strong ties to Bobby”

Never let it be said the otherwise devout Muslim doesn’t get down for his in a verse. It’s all love though, whatever you gotta do to feed the fam’. Next up is “B.B. Gun,” a decent all-star track from Young Gunz, Oschino, Beanie and Peedi. Chad Hamilton’s beat helps it, but the ridiculously silly chorus hurts it. The Young Gunz are back again on the following track “State Property (You Know Us)” featuring Sigel, who comes in and steals the show right at the end: “Cut the check, I turn a mill’ into a billion two.” Some may be tempted to skip right over it to get to “When You Hear That” though, cause it’s the only track on the whole CD where Dirt McGirt gets a chance to join in and shine. Listening to his rap it’s nice to know some things never change – he’s still so fam-damn-funky just by being almost incomprehensible:

“The Ol’ is famous, for igno-rhymeous
I gets mine, stop bein boisterous
Americana, half Mon-TANA
Only gonna, smoke the best mari-WANNA
Diss the Grammy’s, on the panel
Change the channel, good smell flannel
You think shit is dandy, or pussy is candy?
Forty foot glock, keep it handy!
I fucked Amanda, you talk propaganda
Only gettin money, on the Miranda
I stay candid, government branded
Heavy handed, woman demanded!!!”

Does it make sense? Does it even need to? God bless Ol’ Dirty. The song’s beat is unremarkable, but his second verse saves the whole thing from mediocrity. Speaking of which, Freeway dissapoints on the song “Still in Effect” with Neef; having none of the power or ferocity of his previous appearance on the album as they rap over what must surely be a fluke – an UNINTERESTING Alchemist beat. I suppose even DJ Premier has an off day now and then too. More noteworth is the cut “Blow” featuring an assembly of the Roc-A-Fella upstarts paired with Twista. It’s long been rumored he’s looking to ink with either Bad Boy or the Roc, but for now he appears to still be signed to Atlantic. That doesn’t stop him from doing his usual when he appears on a Roc track, and that’s shine his motherfucking ass off:

“I’m a nigga that’ll never go-a broke
To attend, always help a motherfucker get back up
I can hook you up with whatever you want
Fill the city up with 50 bricks and blow the shit smack up
Cut my hustle with real-ass niggaz
Cause on the block, now hoes, you need, some hard
Twista be servin what the niggaz spark
Dealin rocks, blows, weed, pharm’
[…]
Cause you feelin the feelin of makin a killin and steady comin up
I’ma cop myself a whole blow field
Blow so trill you can tell it was the real, deal
Even if I hit it hard with the pill
Tell me how you feel, maybe you was feelin kinda froze
When you took a swill off in the nose
They be servin O’s, cause the fiends gotta get it
Even though they know it make a body decompose”

Fuck Vin Diesel – when you hear Twista rap he IS the fast and the furious. Oschino’s a lot slower on his solo track “Been Down Too Long” but the topic is the same – hustling drugs while ducking rivals and cops. Even though the subject might be getting monotonous, Black Key’s heavy beat and Oschino’s first person narrative stating he’s “been down too long like Mandela with apartheid” make the song a dark and moody winner. Skip “G.A.M.E.” completely though – Henny Loc’s track hurts the ears and you won’t want to stick with it long enough to catch Lil’ Cease in a guest appearance. “Just Another Nigga” gets it back on track with a Ruggedness beat and more show-stealing raps from Beanie:

“In ninety-eight y’all couldn’t trace my mug
Now y’all hate and wanna waste my blood
Cause I’m eatin wanna taste my grub
Tell you what I give you food for thought, the spoon and fork But y’all BITCHES doin the dishes
Feed you shells from this trey-five snub
Not processed, the case won’t budge
No prints pimp, latex glove
You lose in court, fuck you gon’ prove in court?
Sig’ don’t believe in leavin witness”

The album pulls off two winners in a row with “Want Me Back” – a pounding Chad Hamilton track with a sped up Dionne Warwick sample of the same name. “See Clearly” is skippable though – not only does it feature Peedi Crakk, it features him singing a bad rendition of Johnny Nash’s “I Can See Clearly Now” in the intro. Pass it up for the worthwhile and much more heartfelt “If I Could Do it All Again” by Oschino & Sparks. How you feel about the next track is up for debate. If you’re an old school head you’ll immediately recognize the Boogie Down Productions classic that “Criminal Background” covers, and you’ll either be glad somebody still acknowledges the greats or mad that Peedi Crakk perverts that beat with his whackness.

Closing with the bonus track “94 Bars” by Young Chris, the “State Property Presents Chain Gang Vol. II” features somewhat better beats and noticeable improvements over the last compilation. Young Gunz are shining the most, although Oschino & Sparks show more of the potential that brought them to the Roc in the first place. In the end though one is left feeling that an EP for any of these artists (save Crakk) would have served them better with more time to shine in the spotlight alone. This album is certainly not a must own, but give credit where it’s due to Sigel for recognizing his compilations don’t need to be accompanied by feature films.