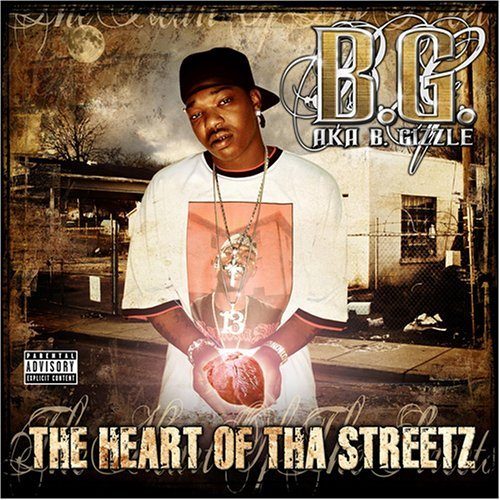 Despite being only twenty four years old, B.G. is releasing his ninth album. After getting his start at age thirteen, he put out several albums with Cash Money Records before departing for Koch. Considering the infamously fickle behavior of major labels, the fact that B.G. has lasted so long in the game speaks to his talent as well as his consistency. He has never let his fanbase down, and vice-versa. Regardless of any opinions of his music, respect is due simply because of the sheer quantity of the rhymes he has authored.

Viewers of MTV will always remember B.G.’s biggest hit, “Bling Bling,” which spawned an entry in the Oxford English Dictionary. They might not remember his name or his significance, but that phrase has certainly been etched into the minds of pop-culture junkies forever. Since his departure from Cash Money, B.G. has developed a more street-friendly attitude. The poorly spelled title to his new album “The Heart of Tha Streetz Vol. 1” reflects this. B.G. has never really left the â€˜hood, and his rhymes are deeply enamored with the place he calls home. Though he has achieved household name status at least on a regional level, his life has been anything but easy. He has struggled with a heroin addiction, something that he has recovered from now, and he is refreshingly candid in interviews about the problems that it caused him. Because of his past troubles, his voice is potentially very wise, and since he was practically raised on rap music, the breadth of his experiences is similarly important.

A notice slapped on the cover of the album will steer any buyer away from the notion that B.G. is trying to change lives or provide true insight to ghetto life. His nickname B. Gizzle is important enough to appear below his name on the cover, which hints at his continued strivings for mainstream success. B.G.’s ninth is nearly exactly what one might expect. There are standard attempts at airplay (most of which are just shots in the dark) with more focused songs filling out the album. The production, done by a variety of people, does its best to recapture B.G.’s glory days riding the work of Mannie Fresh.

The disc opens with the title track, a marvelously subtle and lethargic song that introduces the idea that he is still rooted in the â€˜hood. This is one of the main themes that B.G. addresses, although he does so in a similar fashion on many songs. His drawl is warm and appealing, so even when his rhymes are dull, there is something to listen to. The only difference between the title track and the rest of the album is that the BPM is slowed slightly, and despite the fact that the electronic sound effects vary, nearly every track is constructed using the same basic principles. Heavy mechanical drum kicks, whistles, and the occasional string instrument join with plenty of other computerized sounds, and unless inspected closely, individual songs are nearly indistinguishable. The overall effect is relatively pleasing on the ears, so the music does not retract from enjoyment of the album. Listening to one song from this disc might get one’s hopes up, but the same formula is reprised for fifteen songs, and the skits obviously do not break any ground either.

The best song to be found here is “Same Ol’ Shit.” Aside from being the first of three consecutive tracks with cursing in their titles (quite a feat!), the production from Bass Heavy is superior. A man’s wailing voice in the background sets it apart from the others, and the posse of Hakizzle, Gar, Sniper, and VL Mike break up the monotony of B. Gizzle’s mumbling voice. Ironically, the song is about the dull nature of everyday life, and it is the only true standout on the record. There are a couple of other songs that separate themselves from the others a bit, but for the most part, if you’ve heard a few you’ve heard them all.

There are seven songs that B.G. is expected to carry by himself, and he is not charismatic or lyrically adept enough to do so. Over the years he has developed a macho persona that does not let him down here, and he has moved plenty of units in the past because of it. He is sticking to his guns, and he cannot be faulted for this. I would imagine that if he was skilled enough to branch out, he would have done so by now, and since he hasn’t, it is perfectly acceptable for him to continue down the path that brought him fame. There really isn’t enough unique material on this record to spark any emotions in this critic, I simply must accept it for what it is and nothing else.

If you aren’t already a fan of B.G., this record will not convince you. If you already are, this review will not convince you either. I have trouble listening to someone I can predict, especially when the music and the subject matter are not especially inspiring. “Where Da At” and a few other singles have potential to make some noise, regionally and nationally, but nothing here is distinct enough to turn heads when played on the radio. He has a niche in the market, and his records should continue to move out of the store. He seems to have accepted the fact that he won’t win any converts, and “The Heart of Tha Streetz Vol. 1” is proof.