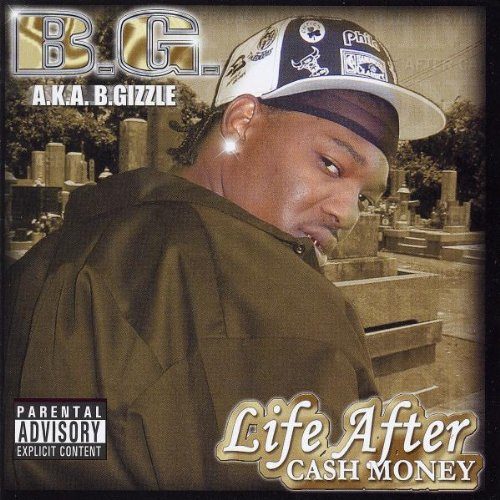 For a man who’s only at the age of 25 B.G.’s already led a full life. From the lows of jail and drug abuse to the highs of worldwide fame and, in Bling Bling, creating a phrase used the world over, B.G.’s seemingly done it all. On March 21st, however, B.G. will be adding to his legacy with the release of The Heart Of The Streets Vol. 2 (I Am What I Am) and we at RapReviews.com sat down with him this week to talk about a myriad of topics, including who he’s cool with over at Cash Money and who he’d like to smack upside the head. At the end of the interview B.G. would get a phone call that would prove his loyalties beyond a shadow of a doubt.

Adam Bernard: First off, what are you working on right now?

B.G.: The album’s done turned in, I’m working on The Comeback Kid. The title speak for itself, a lot of people expected, I don’t know what they expected but they didn’t expect me to last as long as I did after I left Cash Money and now Cash Money don’t even much exist no more. You know, who is Cash Money? And then after I drop The Comeback Kid I’ma turn right back around and drop another album called Let The Good Times Roll. I just be linin my shit up. I just be workin homey.

AB: So you’re never going to leave the studio ever.

BG: You know, that’s what I do. Shit, I ain’t no Tupac or nuttin but my work ethic is a motherfucker.

AB: How did you reunite with Mannie Fresh for the new single?

BG: Me and Fresh relationship always was on point, always was good. I asked Fresh to work on my Life After Cash Money album and he told me he would do it but I had to change the name of my album. With me being the type of nigga I am I couldn’t do that so I told him I’d just wait. The timing just was perfect. It just so happened when I was in the studio doing this album and he called me and asked me was I ready and I was like shit am I ready? Where you at? And he was in Houston and I go on to the next flight to Houston and we got into the studio together and it was just like magic.

AB: A handful of years ago you created a phenomenon with the song “Bling Bling,” which is now used everywhere. What are your thoughts on what’s happened to the phrase?

BG: Yeah it’s in the dictionary man that shit is crazy. For a nigga like me who comes from nothing, from the hood, and I be going through the airports and shit sometimes as a matter of fact a flight attendant the other day said “I like your bling bling” and I just started laughin because shit be funny, she ain’t know who I was and I wasn’t gonna tell her who I was, I don’t even wanna be trippin like that, but shit is crazy.

AB: Knowing you can have that kind of an impact, how are you looking to influence us all next?

BG: I just do what I do. I rap for the streets and as long as I make the streets happy I’m happy. You know when people be saying about mainstream and crossing over and this and that and that and this, well every time I ever been in the studio or every time I ever recorded or every time I ever did anything I don’t think mainstream or crossover because I really don’t believe in crossin over, I feel like I make the game cross over to me. If I try to go that direction then it ain’t gonna be real to me so I just do what I do and whatever happens happens.

AB: Speaking of the streets, your own streets have a major event happen to them last year in the form of Hurricane Katrina, what’s the word on how the rebuilding process is going?

BG: The word is it’s all good and it’s up and running and it’s this that and the other but I went to see for my motherfuckin self and to be honest with you, I’m a keep it all the way 100, they’re rebuildin but they ain’t rebuildin for me and my people, they’re rebuildin for them other folks. When you go downtown to the French Quarter and Bourbon Street and all that shit all that shit lit up but when you cross Martin Luther King the fuckin lights still off in some areas. The shit’s bigger than us, they on some bullshit.

AB: What are your feelings on the job the government’s done for the survivors?

BG: I be wantin to speak, I respect the statement that Kanye West made about Bush and shit but I feel like I can’t make that statement because I have too many convictions and I owe the IRS some money so I’ma just lay up there and keep my comments to myself about the government, but really and truly, fuck ’em.

AB: A lot of celebrities have been outspoken about the tragedy, do you feel it’s their place to speak out, or should it really be up to those who are actually from the area?

AB: How hard has it been to record through all this?

“I was one of them mothafuckas that wanted to ride the storm out, I was like that shit ain’t gonna hit, fuck that.”

BG: Honestly my studio was in Metairie and in Metairie they didn’t have all that water and shit. I just came to Detroit and built another studio. That just made me want to work even harder. I don’t even like speakin on it no more because I’m tryin to get over it but at the same time I was emotionally destroyed. Physically I’m living and I’ve got my family and my niggas and people close to me around so it shouldn’t be hard to make shit happen. At first I was depressed, I was down I was trying to figure out what my next move was gonna be. I was glued to the TV for like a week, I ain’t even leave out the hotel room because I couldn’t move, I was fucked up, I couldn’t believe that shit was happening. I was one of them mothafuckas that wanted to ride the storm out, I was like that shit ain’t gonna hit, fuck that.

“… by the time I’m 35 I wanna be shakin hands with Donald Trump and shit. So I’ve got my goals and my shit already mapped out…”

BG: That’s just my solo albums, that’s not even including the four or five Hot Boy albums so it’s really about fifteen but at the same time what’s left for me? I ain’t gonna be finished before I get that Jay-Z money, Eminem money, you know, that’s when I’ma be content. So I’m 25 right now, I plan on having like 20 albums by the time I’m 30 and I’ma pass the game down to my little brother and my click and just play CEO and by the time I’m 35 I wanna be shakin hands with Donald Trump and shit. So I’ve got my goals and my shit already mapped out how I want to do it and what I want to do because you’ve got to have a plan, a blueprint.

AB: So you really have it all mapped out.

BG: Till 35. Don’t get me wrong I don’t knock rappers and shit but they got a lot of over-aged rappers. I don’t want to be doing this shit that long, I already feel like I’m 40. I’m 25 and I done walked in the shoes of a 40 year old man.

AB: So you feel the game’s aged you?

AB: Damn, that’s rough all around. Last question, and this one’s kinda fun, if you could smack some sense into any one artist or producer who would it be?

BG: Lil’ Wayne. You must have been reading my mind cuz when I kiss him I’ma smack the piss out him. I’ve reading some articles and shit, some interviews that he’s been doing lately that I ain’t been too fine with cuz I know he ain’t built like that and he’s talking all that gangsta shit talking all this that and the other so it ain’t no beef or nuttin, it ain’t gonna be no trigger play or nuttin, but I’ma smack the piss out him.

AB: So while you might be workin with Mannie it’s pretty clear that you’re still not friends with Wayne.

“Baby’s a hoe and Wayne’s a hoe and that’s my relationship with everybody. It is what it is, real niggas do real things.”

BG: Yeah man, me and Fresh cool. Juvy cool, we see eye to eye. Turk my nigga, I talk to him damn near everyday. I’m the only one from that camp that been to see him since he’s been locked up. Baby’s a hoe and Wayne’s a hoe and that’s my relationship with everybody. It is what it is, real niggas do real things.

BG: I think we pretty much covered everything, you know the names of the next two albums and I ain’t never told nobody that but I just was loose this morning. Matter fact this Turk calling me on my other phone, I’ma let you be a living witness.

{B.G. is on the phone with Turk}
“I just was talking bout you in an interview. He was tryin to figure out what my relationship was with everybody and I just letting him know that you my nigga and I’m really the only that be like, you know.”

{B.G. ends the interview}
See, I don’t play no games man, ya heard me.