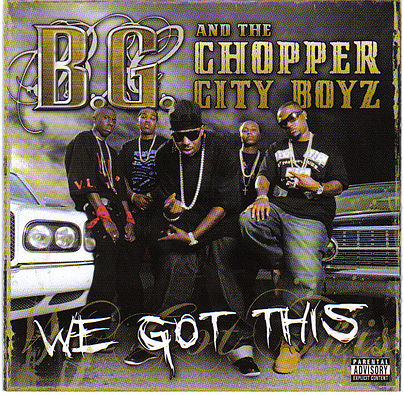 B.G. and the Chopper City Boyz :: We Got This

Hakizzle: “We ’bout to smoke all the dro and pop the crys’
We ’bout to look past you and fuck your chick
We ’bout to hit the jeweler up and rock the wrist
And keep AK for all you niggas poppin’ shit”

And these four bars from “Crucial Shit” cover, more or less, the breadth of the subject matter “We Got This” presents. Adhering to the generic formulas and trappings that mainstream hip hop so often falls into, B.G. and the Chopper City Boyz have managed to create an album completely devoid of originality.

While this mainly applies to the lyrics of B.G., Hakizzle, VL Mike, Gar, and Sniper; the production also adheres to tried and true Dirty South formulas. The quick, snapping snares, booming bass, and epic background noises have been trademarks of southern rap productions for years. The difference here is that the raps of the Chopper City Boyz speak to a lack of thought; the production, while almost as generic, contains multiple layers and is reflective of a much more careful and thoughtful approach.

Ultimately, the production saves the album, and it needs to, because the overtures it makes for commercial success are ridiculous. From Sniper’s blatant jacking of Lil’ Wayne’s delivery to putting B.G.’s name on the cover when he is little more than a featured artist, “We Got This” is, lyrically, mostly a presentation of cheap rip-offs.

But over these beats, which are generally executed flawlessly, the Chopper City Boyz become a great group to listen to. For all their lyrical shortcomings, they do present a good variety of deliveries. The constant switch up from VL Mike and Hakizzle’s slow, drawn out, and confident cadence, to Sniper’s emotive range, to Gar’s biting, agile, flows, they do succeed in making “We Got This” a banger. Gar is the best rapper, standing out easily, especially on his machine gun laced solo track, “Chopper City,”

“Welcome; to the city where the strong survive
Where the good die young from a homicide
Oh no, can’t let that rid, bitch (gunshots)
It’s eye for an eye”

But even he is limited by the generic approach of “We Got This,” which keeps the Chopper City Boyz from establishing any sense of real identity. All the pleasers are here, from the lazy, but smooth, attempt at a ladies track “Never Had,” to the club ready “Bounce,” but there’s nothing here that really sets the Chopper City Boyz apart from any other rappers. They’re just another group of gritty, street rappers who don’t really have anything to say.

So whether you like “We Got This” depends on your taste in music. If you consider yourself a lyrics first person, stay away from this, it’s lacking enough in that department to make your head explode. But if you just want to cruise to some nice beats, “We Got This” is a nice pick-up. Just don’t expect anything new from it, ever.

B.G. and the Chopper City Boyz :: We Got This
5Overall Score
Music8
Lyrics2