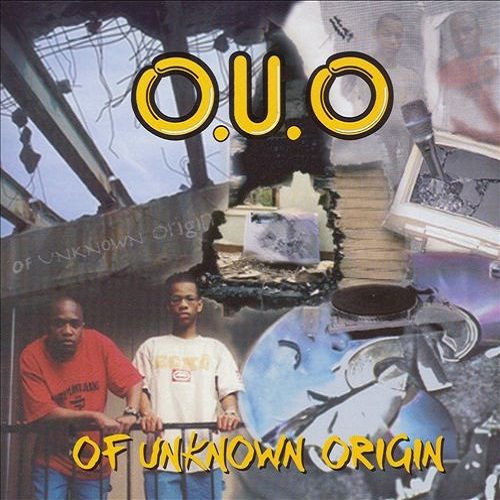 O.U.O. is a group comprised of emcees Pep and Dumi Right (who also happen to be cousins). Born and raised in Zimbabwe, the pair caught the hip-hop bug from tapes sent overseas from extended relatives in the United States and the U.K. They honed their skills in Zimbabwe and eventually came stateside to take an ambitious leap toward the next level. Their debut album “Of Unknown Origin” is the result of an incredible quest to carve their own legacy into hip-hop history.

On “For the Love Revisited”, the tandem sets the stage with a carefree, fun-loving offering. The obligatory ode to females “Look Good” suffers from an irritating hook, which is unfortunate because it clouds three not-half-bad verses, quite a feat considering the over-saturation of these types of tracks in today’s market. The throwback, minimalist joint “OUOutstanding” is a valiant effort to inject a taste of old-school hip-hop, but ends up sounding flat.

“Bad Guy” shines with soft keys and strings backed by a steady drum beat, providing fuel for some of the best verses O.U.O. has to offer:

“I’m not impressed, just depressed ’cause I’m oppressed
Paid my dues but refused due process
Federal investigation taping conversations
Inspecting and checking my political affiliation
Interrogation, accusation, I’m the prime suspect
41 shots and they still wasn’t done yet
Trying to say that I’m the ringleader
They couldn’t find no dirt so they had to dig deeper”

“I Rock” gives the pair, along with guest Cadence, a platform to toot their own horns. The sweeping production and layered samples make “Hooks Reloaded” the best track of the album. Dumi Right uses the groove to calmly assassinate whack emcees:

“Hope that I don’t remember your crappy attitude
I know where you live, your longitude and your latitude
Coordinates, I ordered a hit on your subordinates
Like Ray Lewis in the backfield runnin’ the blitz
Sacked for a loss, knocked off course
50-50 chance of gettin’ heads like a coin toss
You were the man on a pale white horse playin’ polo
What I do to kids? I make ’em fugitives like K-Solo
Richard Kimble won’t get jacked tryin’ to be nimble
Block your shot, then wave my finger like Mutombo
Dustin’ the competition off, man, like Hoff-man
You feel the pain when I ‘Rain Man'”

“Dotted Lines” sports a stuttering, head-nodding production from Kev Strange where the group starts by paying homage to hip-hop’s Golden Era, then proceeds to redirect the spotlight back on themselves. Strange, but you’ve got to respect their confidence. The engaging soundscape of “Trapped” draws listeners in as the duo gets introspective:

“I don’t know why it gotta be that way
But real niggas that don’t die get killed everyday
See I just wanna party with everybody
But you gotta claim you caught a body to be somebody
Your story gotta be gory ’cause blood sells
Some blood cells can’t fight back and that’s quite wack
Bite that!”

The album derails with the next two tracks, “Crash Thru Walls” (the reunion of indy group Zimbabwe Legit, Dumi Right and Akim the Funk Buddha) and “It’s Time”, two forgettable cuts for completely opposite reasons. The former is a little bit too obscure and the latter is too generic.

“Of Unknown Origin” gets back on track with “Rock N Roll”, a heavy-punching soundbombing from Kev Strange. The vocals are equally bombastic:

“I dubbed the track, but where they started to rhyme, they amuse me
Claimin’ he’s the best but I’m like, ‘Who’s he?!’
You see, back in the day you’d get jacked for bein’ whack
But nowadays cats gettin’ dap for kickin’ crap
And it’s duck season and I’m settin’ the traps
My little nephew can rhyme better than that, I’m ahead of the pack
The fact that they signed is a sign of the times
Lyrics are paper thin so I’m reading behind the lines”

In “Yesterday”, the pair reminds listeners that they can’t reverse past mistakes and their only option is to push on. Another hater-duster comes in the form of “Eye 2 Eye”. “Pushin’ Pens” featuring Cadence and “Came 2 Far” featuring Sol reiterates the group’s endless devotion to preserving “real rap”. This devotion takes two forms: slaying fake emcees (“Pushin’ Pens”) and self-preservation (“Came 2 Far”). The cause is admirable, but at this point it’s been stated a few too many times and lost its potency. That said, it’s hard not to appreciate their genuine concern. The album ends with “Unorthodox (remix)”. H-Peh delivers a jittery, spastic production and Cadence drops in for a guest vocal. “Unorthodox” is reminiscent of much of the album: the duo packs plenty of one-liners and witty couplets, but they seem to struggle with maintaining a focused train of thought for an entire song, causing many tracks to lose their novelty after only a few spins.

While the album is far from perfect, O.U.O. drops a respectable debut that shows flashes of brilliance. More time in the game will only improve a group that already displays enough talent to keep them around for a while. But what comes through loud and clear from their music is their deep passion for pure hip-hop. You can’t help but root for them. The industry needs more of these guys, those who are actively trying to preserve a culture they once loved that they no longer recognize. It’s plain to see that for many commercial rappers, the ultimate goal is the almighty dollar. As a result, their lyrics reflect no goal, no knowledge. While not as polished as their big-budgeted peers, O.U.O. can’t be faulted for being without purpose. As stated in “Unorthodox”:

“What’s the only thing worse than a rebel without a cause?”