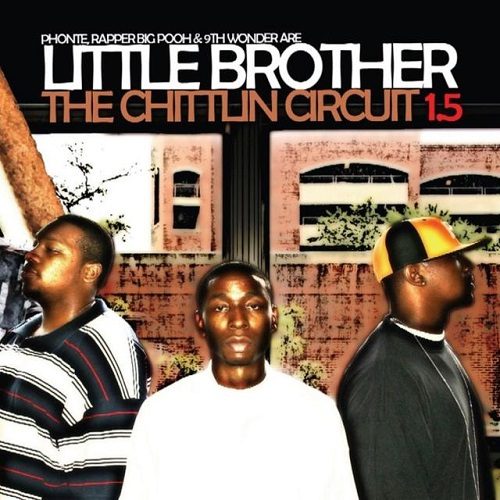 Another month, another Justus League release, this time from its most illustrious alumni, Little Brother. It is becoming increasingly apparent to this reviewer that there really is no escaping the Little Brother hype machine, what with everyone from Cormega to Jay-Z to the pigtailed valley girl at the gym harping about 9th Wonder’s latest exploits. I don’t mean to be a party pooper, as I have nurtured a yen for 9th’s sultry, smolderingly soulful brand of boom-bap since “The Listening”, but one can’t help but wonder why J. Dilla never achieved this level of notoriety, especially considering 9th has largely emulated Jay Dee’s immortal sonic template his entire career, peppering “Fantastic” Motown funk n’soul with piquant Soul Brother Number One-isms to create something that is undoubtedly brilliant, but wholly referential and hardly revolutionary. That being said, when one removes oneself from the (oft-neglected) context from which Little Brother was spawned, the end result is unquestionably satisfying- wholesome, nutritious, honest and unapologetically orthodox vintage rap. As one might expect with their immaculate track record, one can expect no less from this odds n’sods compendium.

There is little to say here that hasn’t been said before about Little Brother, and considering their unwavering dedication towards vehemently traditionalist boom-bap, I could hardly offer a more insightful perspective than the last Little Brother review you read. The key word here is FINESSE- Phontae and Big Pooh are far from outstanding as individual lyricists, 9th Wonder hovers dangerously close to plagiarism with his drum sound and general approach, yet as a unit there is a consummate professionalism to everything they grace, an impeccable Ã©lan that exhibits a heartrending sensitivity for the sensibilities of rap’s most beautiful era. As hard as I try to throw dirt on Little Brother’s name, I can’t help but surrender to the irrepressible ingÃ©nue and goosebump-inducing honesty on offer in every bar, every snare and kick.

As with most Little Brother endeavors, everything here is uniformly consistent, though certain tracks do prove slightly underwhelming after repeated listens. Much of this can be attributed to ill-advised guest shots from somewhat less talented Justus League comrades- Joe Scudda mars a quirky, idiosyncratic Commodore sounding loop from Khrysis with his slo-mo Kool G Rap impression, Chaundon is impossibly awkward on “The Honorable” (“When you on the mic, I agree with Teddy Riley, I see booty”), O-Dash, after having contributed a tiresomely generic verse on Big Pooh’s otherwise sterling solo effort, plagues this record with yet another forgettable Roc-A-Fella-lite verse (is it any surprise that 9th’s track itself sounds like a throwaway Roc-A-Fella joint, complete with a Rell-alike on the chorus?). “The Yo-Yo {Remix)” is a bit of a misstep, the beat failing to capture the same arresting warmth as the original, “The Way You Do It (Remix)” providing a twist that is certainly novel, but not necessarily successful, coming off as a b-grade take on some of the Neptunes’ breezier numbers.

Elsewhere however expect nothing but hits. “Welcome to Durham” continues to be a banger a year after its leak, grafting a typically stellar Kane verse over a beat that sounds eerily similar to Alchemist’s “The Man, The Mythâ€¦” and boasts just as much trunk-rattling, ice-grilling potential. Somehow, while his sonic blueprint has been derived from a host of obvious sources, 9th is gradually coming into his own of late, forging a unique sonic niche in an underground littered with portentous, pseudo-progressive (read: blithering noise) mallrats who think DJ Shadow and Company Flow are the alpha and omega of beat-oriented music. Perhaps this has something to do with Pete Rock’s progressive artistic decline (Soul Survivor 2 was a mess!) and Dilla’s abandonment of Motown mojo for something decidedly more sinewy and throbbing, but 9th is, while one of the most unadventurous producers today, still among the more consistently necksnapping soundsmiths this side of Ayatollah. “The Honorable” has significant longevity to this day, “On The Way” is an exercise in elegant simplicity, 9th extracting plenty of head-tugging groove from a nude bassline, sporadic vocal samples and bare hi-hat/snare pattern.

Ultimately, there is absolutely nothing here that you haven’t heard on the last Chittlin’ Circuit mixtape, or indeed any other Justus League offering to date. While some might regard their rigid orthodoxy as hapless artistic redundancy, particularly in an underground that seems all too eager to reinvent itself (often with disastrous results, see: the last Beans record), I assert that their honesty and conviction deserve all the accolades they receive. If anything, Little Brother make me reach for Mecca and the Soul Brother, Fantastic Volume One, The Main Ingredient, Step Into The Arena upon exposure. While they have yet to reach the giddy heights of such transcendental classics, the fact that they have distilled the spirit of simpler, less pretentious times is worthy of much praise.