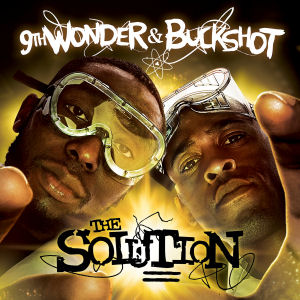 Back in 2005, the combination of Black Moon’s Buckshot and Little Brother’s 9th Wonder seemed like a strange coming together of two different sounds. My ears were used to hearing the vertically challenged emcee spitting hard rhymes over dusty boom bap beats, but the soulful sampling and clean drums reinvigorated Buckshot. “Chemistry” was a strong record, but mostly included great beats and average lyrics, with the occasional banger thrown in (ie. “No Comparison”). “The Formula” came in 2008, and although marginally better overall, it wasn’t without its share of forgettable tracks. In 2005, there was 14 tracks, 2008 it was 13 tracks, so it’s no surprise to see the latest collaboration “The Solution” slimmed down to 12 tracks.

Having been a fan of pretty much anything Buckshot is associated with; there is little point over analysing his rhymes, as the charisma and likability that Buck exudes on a mic is unmatched. There is no advanced lyricism on “The Solution” or even one song that concentrates on a specific topic, it’s one guy rapping as only he knows how. I remember listening to “Survival Skills”, a collaboration album between KRS-One and Buckshot from 2009, and although a colleague here at Rap Reviews gave the album a perfect 10/10, I felt Buckshot outshone both the production and KRS-One throughout.

“The Solution” is effectively more of the same, real solid hip hop that’s guaranteed to please fans of either artist. There is a slightly more mature edge to Buckshot even though he spends most tracks talking about how great he is. With “The Big Bang”, a record reminiscent of post-Millenium Cam’ron with verses written around the vocal sample, Buckshot reminds today’s listeners just who he is:

“When I first dropped, back in 9-3
A few labels shocked, they couldn’t sign me
I had to climb these, steps my rep caused a (Big Bang)
First to go army style, first to be militant
My verses beyond a style, my verses be diligent
Fuck a pow-pow, when I’m killin’ it
You hear a (Big Bang)”

Not classed as an intro but effectively that is what it’s purpose is, “The Big Bang” is followed by “What I Gotta Say”, a more sinister sounding production with a beautifully chopped vocal from The Foundations’ “New Direction”. Buckshot spends the track bigging himself up, but ultimately ends up being an average song. “Stop Rapping” is an absolute banger whereby the BDI Thug tells upstart rappers to change careers, and includes what sounds like a jab at artists like Gucci Mane.

There are a few examples of Buckshot stepping back from his cocky demeanour. He talks about relationships on the smooth as butter “The Feeling” and “Pat Em Down” covers paranoia amongst snitches in the street. “Keep It Going” is ridiculously funky with 9th Wonder delivering a beat that sounds more like early Kanye West material. Buckshot does his thing but doesn’t really make the most of such a hot beat.

The album does get a bit samey until the only guest (Rapsody) makes herself known on “Shorty Left”, a track that initially has Buckshot proclaiming “I’m out for my dope because I ain’t doing what you said”. But Rapsody flips it by dropping a concise verse that puts Buck in his place:

“I supported dreams and everything that you wanted
But what about my own? Ain’t got the family I wanted
I know your grind keeps the lights and roof over us
Refridgerator’s full but I wanna drive a new Rover
And how we gonna have a son when you ain’t ever home for me
Maybe you should think of goin’ major because these indie G’s
Don’t keep me pleased, and the latest fashions from Fendi
I can’t have my son growing up eating Wendy’s”

It’s not hard to see why the undoubted talents of Buckshot and 9th Wonder haven’t produced the classic they are capable of making. Buckshot shined in Black Moon, with KRS-One, with Boot Camp Clik and holding down 11 out of 12 tracks on “The Solution” proves that his simplistic style can get a bit monotonous. But when 9th pulls a crazy ass beat out of his locker, Buckshot’s rhymes get elevated to a different level entirely. Listening to “Crazy” or “Pat Em Down” become borderline boring with their mellow atmosphere which places the emphasis on Buck, but when listening to “Sam” or the incredible “You”, it’s apparent that Buck’s style works best over the catchier beats. “Sam” talks about a drug dealer friend but never goes deeper than an introduction, and “You” operates on a different echelon to the rest of the album. Trust me, this beat needs to be heard on a high-end sound system. Musically, 9th has brought together the sombre “I Just Don’t Know” by Tommy Tate and flipped it into a horn-infused neck-snapper. Unsurprisingly, Buckshot delivers his best performance:

“Runnin’ out of time, you’re runnin’ outta lines
Your shit is too simple, used your mind
I rewind time like Deloreans
Just to bring you back to the spot where they brought me in
All black trees on the side of the boots
Walk through the wilderness like Chaka Zu’
What I can do, incredible, unlegible
When I write so my head’ll do it
Ciph, I get high all night
So I strap my pen in my hand and ride on the lines like
No stop signs, no yield, just know Buckshot
Don’t chill, I buildâ€¦
New empire, ’cause you been fired
I told son “Pat Em Down”, you been wired
That’s why I trust a few, so I hope I can trust in youâ€¦”

The disgruntled old rapper is an image portrayed by most hip hop artists in their forties and it is brought up throughout “The Solution”, but Buckshot has a swagger in his delivery that makes each threat feel playful rather than menacing. On “Chemistry” and “The Formula”, there wasn’t necessarily any wack performances from either Buckshot or 9th Wonder, and you wouldn’t expect that from two masters of this game we call hip hop. It’s just that where the two previous collaborative albums consisted of good soulful hip hop music with a few neck snappers, “The Solution” doesn’t differ from the previous instalments at all. If you’re a fan of either artist then it is certainly worth picking up, as “Sam” and “You” are two incredible tracks that deserve radio play but ultimately won’t get it.