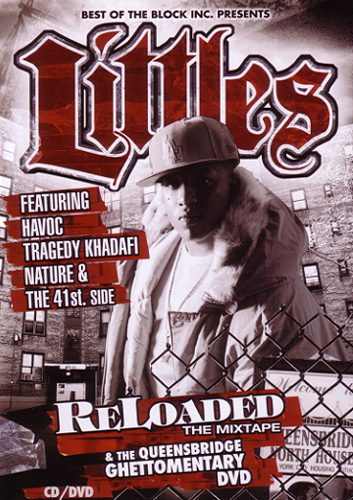 Marley Marl & MC Shan introduced it to us. Nas took it to the mainstream. Mobb Deep expanded it. But with Nas and Mobb both in the second half of their careers and Marley & Shan all but retired, the largest projects in the world will soon need a new spokesman for the future. Meet Littles: the self-proclaimed heir to the throne of Queensbridge. He’s never dropped an LP and he’s not signed to a major label, but his name’s been gathering a buzz in leading hip-hop magazines, mixtapes and radio shows. With such a history of greatness coming from such a concentrated area, 6 blocks to be exact, the expectations of this MC are anything but little.

The single “We Are” gets thing started with catchy electric guitars as Littles tells us who he is:

“I am the most slept-on, hustling MC
With no label, no major budget
For the past three years brought myself to the public”

His work ethic is relatable to the pioneers of down-south hip-hop. Whether he’s selling CD’s out of his trunk, as seen on the DVD that came with the mixtape, or selling thousands of his DVD’s hand-to-hand at record stores across the country, it’s clear that this MC isn’t waiting for fame to come on a silver spoon; he’s trying to grab it off the plate by working the hardest to get it. However, hard work will only get you so far in the rap game. If you lack talent then you just worked harder than everyone for nothing.

His flow is respectable but not his strength. If his rhythm was like his car, then he just uses it to get from A to B, not as a vehicle to show-off and make jaws drop. When he tries, he does rap with a piercing line of truth in his rhymes. “Why I Cheat” is self-explanatory. He goes beyond the usual “I know I cheat but I’m a man, what do you expect” excuse that most rappers use these days; he at least explains the cause for his actions.

“Though you hated mama, I still looked out
Put clothes on your back, food in the kid’s mouth
Mama I raised you, practically made you
You wasn’t there when my dreams was entertainment
And I still took you out the hood, brought you from the curb
Why you always complaining
Man, you think she’d be grateful, but she ain’t
So I cheat”

The beats on the album were selected with a soulful ear. “Sick Wit It” produced by Rick Rude is comprised of crying synthesizers that are comforted by sampled vocals. The detailed verses of his life bring us closer to the man behind the rapper; unfortunately the half-assed hook (“I’m so real wit it/I’m so sick wit it/I get jiggy wit it”) bring us closer to the manufactured persona that the realest rappers usually stray from. “Lord” is a gem of the CD that combines a soulful, melancholy beat with Littles most truthful and personal lyrics on the album:

“I went to Catholic schools
Momma thought it would shape me right
It made me fight
Shed light, place fate in the palm of a gun
Pluck Christ off my shoulder
By 12 homes, life was colder
Plus school was different now that I was getting older
Stuck between an honor roll or bankroll
Like a book or crack a pen or gat
Then I found my life boxed in
23 I was in a cell 5 years, no oxygen”

“Reloaded” is a solid effort to create a bigger buzz for himself. It listens more like an LP than a mixtape. The problem is that the Littles that could potentially hold down the biggest projects in the world only shows up half the time. The rest of the time he’s falling into the clichÃ©s that bog down rap albums by the thousands. He’s trying to sound the hardest and constantly looks to build street credibility in his rhymes and in the process comprises originality that would’ve set him apart from the rest of the pack. That said, his work ethic and his more lyrically creative side show a rapper with the potential make quite a big name for himself, even if he is Littles.