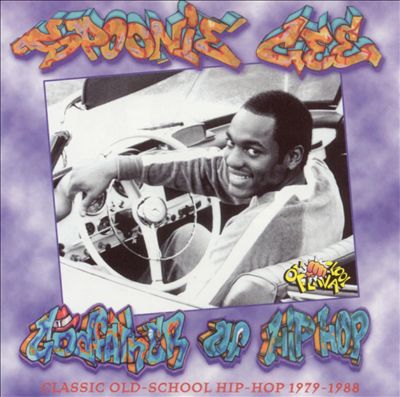 Though this CD was released in 2004, the most recent music on it is still 17 years old. This presents a dilemma as to how to approach such music, especially considering the scarcity of truly timeless music in any genre. Luckily for Spoonie Gee, his raps are fresh enough to not need any pity or old school quantification. â€œGodfather of Hip Hopâ€ is old school in every form and fashion, from its simple breakbeat production to Spoonie Geeâ€™s â€œYes Yes Yâ€™allâ€ flow. The distinguishing factor is the fact that Spoonie Gee is entertaining enough so that a fan can appreciate him in 2005 just as well as they could in 1979.

The album opens with â€œSpooninâ€™ Rap,â€ a track that showcases what Spoonie Gee, and for that case emceeing, was all about in 1979. Peter Brown provides the beat, lacing a funky bass line break with a simple drum pattern. Spoonie Gee provides party-oriented rhymes that surely would have gotten any party started back in the day. â€œLove Rapâ€ follows, and though the basics of the track are the same, Spoonie changes the topic matter addressing females, both the good and the bad. Legendary producer Davy DMX shows up for the next two tracks, providing some breaks that are still used today. â€œThe Big Beatâ€ finds Spoonie spitting for the ladies once again, while â€œStreet Girlâ€ addresses a serious topic as Spoonie laments over the situation faced by girls who turn to the street life.

The album hits its first snag on â€œYum Yum,â€ a lame attempt by Spoonie to blend roots reggae and hip-hop. The roots-reggae beat provided by Pumpkin isnâ€™t a bad effort, but Spoonieâ€™s Jamaican accent and slow rhyme approach just sound forced. Luckily the album picks up from there thanks to three contributions from Marley Marl. â€œTake It Offâ€ features Marley Marlâ€™s signature drum patterns and Spoonie Gee once again telling stories about the ladies:

“Now you called my house and you said ‘come over’
Your mother and your father are gone, and you’re alone with Rover
Your dog, but now you’re frontin
You said if I come you’d give me somethin
So don’t start playin around, cause I’m serious
Girl, what did you call me for, cause I’m curious
Now did you call me just to look in my face
Now I know I ain’t come just to take up space
Because the night is right, and the stars are bright
So come on, soul sister, why don’t you do right
And just take if off, I mean everything
Hurry up, pretty mama, so that we can swing
Now I don’t smoke, and I don’t get high
But if I say I don’t love, well, that would be a lie
Cause I do every chance I get
But if I don’t, I won’t fall, I won’t fret
Cause I’m no fool, I got plenty of sense
So I’ll just be cool and have patience
So when you make up your mind, please let me know
Cause when you give me the green, that’s when I’ll go
So please, pretty mama, don’t hesitate
And entice me nice and cooperate
Now you tried the rest, now try the best
But when time come, girls, don’t you fess
And just take it off, and I mean it all
Cause I’m big time, baby, and I ain’t small
Now undo your hair, untie your shoe lace
And after you finished, I want you to face
Me, now baby, don’t get scared
Cause I’m not like the other guys, so don’t compare
Me, tender loving care’s all I give
And if possible, girl, well, I would like to live
With you, but if I do it ain’t everybody’s business
Secretly is just how we got into this
So take it off, cause I’m ready to rock
And like ??? baby, until the last drop
Cruisin down the street in my SL
When I peeped this girl who was built very well
Her face was beautiful, body was fine
Well, how did I know? Cause I was cruisin behind
Her, looked at my car, looked at me
Then she asked me my name, I told the girl Spoonie Gee
But I didn’t wanna out-play my hand
So I talked so that she could understand
Me, she was definitely the move
I only said sweet things that would soothe
Her, opened up the door, and she got in
And automatically my mind just turned to sin
I told her: ‘Take it off!'”

â€œThatâ€™s My Styleâ€ follows and doesnâ€™t hit as hard, mostly due to Spoonieâ€™s generic raps. â€œThe Godfatherâ€ rounds out Marley Marlâ€™s contribution to the album and features the albumâ€™s best production. Spoonie Gee also steps up his game, using a more energetic and confident flow. The album ends with two contributions from R&B hitmaker Teddy Riley and one from Aaron Fuchs. The Teddy Riley tracks sound forced, as Spoonie Gee doesnâ€™t sound good over the new jack swing of the 1980s. â€œYouâ€™s An Old Foolâ€ is actually a great track to end the album as Spoonie pokes fun at older men trying to holler at girls, reviving his focus on the ladies.

â€œGodfather of Rapâ€ definitely contains some gems that any fan of Hip-Hop would appreciate. That said, the album is really just a collection of all the 12â€ singles Spoonie Gee released during his time at Tuff City records. Some songs are hits while others are misses. Overall, the CD does a good job of showing why Spoonie Gee was a legend in his time, overcoming the moments where Spoonie sounds like any other generic old school emcee.