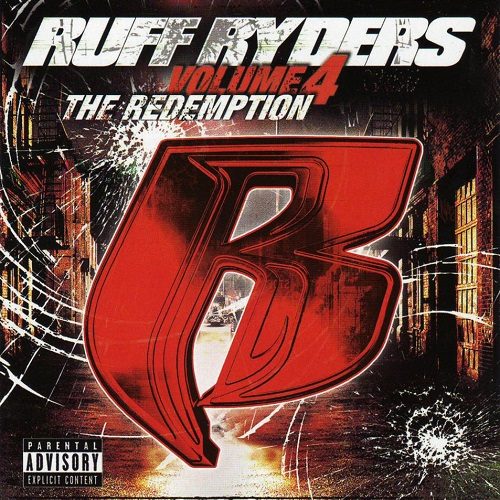 It’s a well established recipe for success. Take one part Swizz Beatz, one part The Lox, one part New York attitude and one part guest rappers. Mix them up in the recording studio, bake in the inferno of underground mixtapes, and serve it to the public once everything’s hot. That’s how the grimy street clique known as the Ruff Ryders have sold like Girl Scout Cookies, always making up fresh batches of music for a public with an insatiable appetite. “Ruff Ryders Vol. 1 and “Ruff Ryders Vol. II” may not have been critically acclaimed by music critics, but the sometimes elitist nature of criticism means reviewers aren’t in touch with what the public really wants. Then again critics who do try to recognize that entertainment is just as important as being avant garde and pay respects to the Nelly and Missy Elliott’s of the world are soundly thrashed for it by readers with a holier-than-thou “how dare you” attitude, who think there’s only room on the pedestal for Canibus and Ras Kass. That’s another subject for another day, but the point is that there’s no such thing as perfection in the music business, whether you’re making it or you’re writing about it. Some things work and some things don’t. Some people like Girl Scout Cookies, some people like Pepperidge Farm. The only thing you can do as a writer and reviewer is try to be fair and impartial. Even if you didn’t like the last batch of music someone made, you have no way of knowing for sure the next batch won’t be the best thing your ears ever tasted.

It’s hard to not be a little skeptical about the Ruff Ryders new compilation “Volume 4: The Redemption” though, because some of the ingredients that made their previous hits taste great are missing. You won’t find Eve or Yung Wun anywhere on this 18 track, 68 minute long album. While only one of those two may be considered essential to the public, you can’t knock the flavor that Yung brought on songs like “WW III” and the “Down Bottom (Remix),” and you certainly wouldn’t want any kind of Ruff Ryders album without tracks like Eve’s “What Ya Want” and “Got it All.” Thankfully the rappers in The Lox have always been the standard bearers for the clique, appearing on all of the albums to date and playing a prominent role in this new edition. A Ruff Ryders album can survive on their strength alone, which they ably prove on the opener “Ruff Ryders 4 Life”:

Jadakiss: “They hate it but they love it in exchange
Piped out the denim seat covers in the Range
Wiped out all the above slots, I’m never gon’ cool off
Nigga I’m dumb hot, I get it in one whop
My man said I need a one to three, he illin
All I need is another 1 in 3 million
Oh yeah it’s nothin to murk you
I realize it really ain’t worth it when I’m puffin the purple”

Sheek: “Dump out watch muh’fuckers scatter
Lose bladder, piss in ya favorite jeans
Niggaz make-up more shit than Maybeline
The Vince McMahon, Ted DeBiase
Thirty of Courvoise’, blunt in my mouth
Crack in the streets weed bags bustin out
Dime bitches that I’m fuckin wanna curse me out
Hatin niggaz in the hood wanna hearse me out
Fuck ’em, come do it, the rifle is antique”

The pounding track by Devine proves here that he is an able substitute for Swizz Beatz. It’s still good to hear from the accidental genius though on tracks like “Aim 4 the Head” featuring Cassidy and Jin, or “What They Want” featuring Cross and Infa-Red. The latter of the two may in fact be underrated as an MC:

“I’m up in the club, I’m drunker than a muh’fucker
My eyes is low, I’m higher than a skyscraper
Shorty in my ear like is we gon’ slide later
I’m like a charity the way I give away paper
The way I pop bub, heavy tips for the waiter
I’m getting love like I just came home
Fresh out the black box and the shackles is chrome
Now it’s back to the fiesta
When it comes to this mic I’m a molester
Let mami sip grapes so I can caress her
She saw the Batman doors that’s what impressed her
So I took her to the crib, so I could bench press her”

The bad news for Ruff Ryders fans is that these are the ONLY two tracks that Swizz Beatz produced, which means another key ingredient in the recipe has been left out. Still even for substitute sweeteners, you have to give credit where credit is due to the other producers putting their dextrose in the mix. LV’s salsafied “Ghetto Children” is refreshing, Akon’s beat is as smooth as his crooning on “Stay Down,” and Scott Storch is absolutely FIYAH on “Get Wild” – which sadly is DMX’s only appearance on the entire album. In terms of flavor substitutions in the recipe, with all due apologies to Kartoon and Flashy, neither of the two equals one bark from the Dog.

The end result is that like every other Ruff Ryders compilation to date, what you get is a very mixed bag of cookies. One minute you’ll be salivating for the taste of songs like the pounding pianoes and “thug chick” R&B of Aja Smith’s “Stupid Bitch,” the next you’ll be wondering why you have to endure another mediocre Drag-On track like “Throw it Up.” You’ll love the pounding bassline DJ Green Lantern puts on “Keep the Gunz Cocked” but you’ll hate the mediocre Jamaican riddim and chatta of “Dale Poppi Dale” featuring Pirate. There was a lot of opportunity for the Ruff Ryders to come with some summer hotness given this album’s release date timing, but while a few singles may become chart climbers the overall appeal is lukewarm at best. You really can’t do a Ruff Ryders album with so many essential flavors and ingredients missing and expect a great batch of music. In the end they’re lucky it’s no worse than the last album. Even though I’m not in the kitchen, I still expect to take the heat for saying that, and so be it. I really don’t mind the heat – I just wish the Ruff Ryders would have brought more of it so that “Volume 4” really would be their redemption with the best taste yet instead of being stale like three day old bagels.