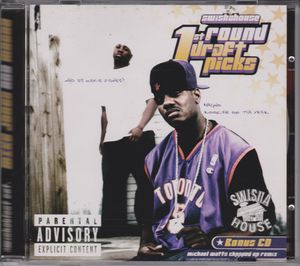 “+First Round Draft Pick+ coming; +Who Is Mike Jones?+ coming.” Mike Jones first uttered those words on the Swishahouse compilation album “The Day All Hell Broke Loose 2” on a track titled “Still Tippin’.” By now you all know the story – the song blew up from regional favorite to national crossover hit, Mike Jones released that album he mentioned, and “Still Tippin'” was still so popular that they had to include it on his CD. What of that other album mentioned in the song though – “1st Round Draft Picks” – what’s the deal with that? Well like a lot of Swishahouse’s other releases, it has to blow up locally first before getting the second push at national. While you’re waiting for that solo album by Paul Wall to drop, the void is being filled by a new edition of “1st Round Draft Picks” complete with a free “Chopped Up” bonus disc by Michael ‘5000’ Watts. That’s right, even though you’d normally have to pay full retail price for it seperately, the Swisha camp decided you should get two for the price of one on this joint. Kudos on that one.

While this album may be packaged like another Swishahouse compilation, the top billed stars on this album are actually Mike Jones and Magno (a.k.a Magnificent). One thing’s for sure listening to Jones rap on this earlier release – he never has been and never will be a lyrical genius. There are certainly no pearls of wisdom to be plumbed from with the murky confines of these lines on “Day 2 Day Grindin”:

Thankfully Magno has a LITTLE more potential with his raps:

“So you know my whip sick, like my Benz topless
So like a game of dominoes I dropped the big 6
In a drop with thick chicks, the guts is plushed off
Makin girls rush out, cause we throwin bucks out
Now my green stackin, you’ll never say my team’s slackin
If it’s beef, we got +Loose Cannons+ like Gene Hackman
He just fine, it’s Magno, the streets is mine
I’m in that 740-i, backseats reclined
With the curtains in the back, girls twerkin on the sack
Niggaz fight for front seat the 18’s hurt ’em in they back
The game need me like, Gladys need the Pips
My wallet’s like a python – it always keep a grip”

That’s how it goes pretty much throughout the entire 15 tracks and fifty-six plus minutes of “1st Round Draft Picks” – Mike Jones says something dumb as hell and Magno comes in on clean up to salvage the song from being totally retarded. Thanks to beats by Salih Williams, Anthony Sears, Shadow Black and DMD – the latter’s “Chant” is well recommended if you need an adrenaline dose of attitude – the album succeeds musically. It’s just a shame Magnificent has to share the mic with Jones, because this rapper has enough talent he would be much better served on his own. Songs like the finale “Ghetto Cry” are proof:

“Check it – it’s like the world gettin colder by the minute
It’s a shame niggaz in this game gotta flip boulders for some spinach
Just to survive and put clothes on they back
Niggaz in the street’ll kill for some fo’s on they ‘llac
Leave holes in ya back, you seen the news dog
Po-pos still attack to dispose of us black
So I flow fo’ my stack, I’m doin it the legal way
But if I have to, I’ll do it Desert Eagle way
But I don’t want my momma to cry”

Nobody wants yo’ momma to cry Magno, but she might if she knew you were rapping with Mike Jones. “1st Round Draft Picks” doesn’t quite have the pounding beats of “Who Is Mike Jones?” but it does get bonus points for making Jones split his raps with a much better MC and for the aforementioned free “Chopped” disc. All in all it balances out nicely into a fairly enjoyable release that while being far from perfect can get the job done until Chamillionaire or his ex-potna Paul Wall drop their new albums this fall.