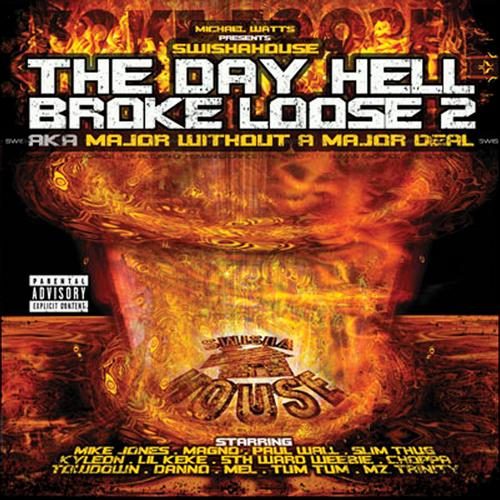 Swishahouse Records prides itself in being a “major without a major deal.” Rumors abound that the Houston, TX based label has been offered distribution deals from major labels and each time the label has turned them down. While the validity of these rumors is questionable, the label has more than earned the right to be called a major record label. Home to three of Texas’ top rappers and the state’s 2 premier mixtape DJs, Swishahouse has MAJOR artists and a MAJOR fan base. From its legendary screwed up mixtapes to its slew of “proper” releases, Swishahouse sells major units in Texas and throughout the south. The label’s latest offering is a compilation aimed to show just why people like The Neptunes are looking to Swishahouse artists, like Slim Thug, for their latest hit.

The album appropriately starts out with Swishahouse’s young star Mike Jones, a rapper who has gained an enormous following in Texas in just the last 3 years. If that wasn’t enough Lil’ Keke and Slim Thug also come through to drop verses. The songs title “Cash That I Got” explains what the track is all about but it doesn’t do justice to the flows found on it. All 3 MCs come correct with their own story of how much cash they have and how they went about getting it. The beat is more upbeat than the usual Texas funk, but complements the brags found on the track well. “Still Tippin'” is a track more people might find familiar as the video has found its way onto BET’s Uncut video show. If there was a signature Texas sound this track captures it to a T. The line-up features Mike Jones, Paul Wall, and Slim Thug each dropping a verse. But more important than the MCs here is the beat, a slow moving track deep in bass and with a subtle but effective string hook. The hook is a screwed and chopped sample that further conveys what Texas is all about. “Get It Sowed Up” is interesting because it uses a sample from what I think is The Nutcracker that surprisingly works far better than one would think. To add to the flavor the track is chopped but NOT screwed, a concept that ends up sounding pretty good especially with the way the sample is used. On this track Mike Jones drops one of his signature fast-paced and at times frantic flows and does something most rappers would never do when he gives out his cell phone number for his fans to call. While unorthodox, this is home-grown promotion at its best and its part of the reason Swishahouse is so big in Texas.

“I’m a Pimp” is another stand out track featuring Mike Jones, Paul Wall, and Lil Keke. Each describes what being a pimp is all about over another string-laced beat. Mike Jones steals the show as he proclaims:

“I’m growing like Rogaine, took over your hoe mane
In seven months, Mike Jones took over the whole game
See while you niggaz at home trying to hate
Y’all need to step up to the plate
Cause I ain’t about to feed y’all
I’m about lead y’all
I bleed the block and stack a knot
when laws get hot I shake the spot
I show the rocks and hoes bop
and they ain’t even seen my drop yet
Princess cuts, channel sets and baguettes on wrist and neck
The mic I wreck, so now a lot of people show respect
All plexers, my Lexus is done Keke
now the whole world wanna see me
You see I grind to stay paid, no time for minimum wage
A Escalade got it sprayed, cause we young made and paid
I lay on white butter, my ice’ll make you stutter
I’m young local and gutter, but thoed as a motherfucker”

For those unfamiliar with Texas rappers, most can best be described as battle rappers of sorts. Freestyles are highly regarded both on and off mixtapes and rappers constantly try to show each other up through brags of better styles, larger fan bases, or having more money. While this doesn’t sum up every Texas rapper or every subject addressed, it definitely captures the essence of this Swishahouse CD. It may not sound very appealing to some, but it’s done in a style that begs attention. Perhaps attempting to mix things up bit and get a bigger audience, N.O.’s own Chopper and 5th Ward Weebie make an appearance on “Throwed.” The result is not as good as it could have been as Chopper and Weebie bring and average performance of New Orlean’s bounce and the Texas rappers sound a bit out of place over such a fast-paced style. Other than the aforementioned “Throwed” the only other sub-par track is “I’m A Balla” featuring Towdown Danno and Mel. The track doesn’t sound out of place at all, but compared to the other prominently featured rappers, these MCs don’t make the cut.

Overall “The Day All Hell Broke Loose” is a good CD sure to garner Swishahouse more support through out the south. With nationwide video play this added success could be even more widespread. The music on this CD is good from start to finish providing listeners with a glimpse of Texas’ signature sound. Yet the production doesn’t get repetitive either as tracks like “Hustlin'” and “Magno and Killa” switch things up. “Hustlin” is a more soulful approach to the beats that is reminiscent of Camron’s “Oh Boy,” while the loops on “Magno and Killa” sound almost like mid-90’s west coast funk. On the mic the album is Texas at its best. Lil Keke, Paul Wall, Slim Thug, and Mike Jones dominate the album and each shows why they are underground legends in their own right. And if somehow this wasn’t enough motivation to get you to cop this album, Swishahouse includes a second disk with the screwed and chopped version of the album. What’s surprising about this is the fact that throughout the south artists like Juvenile, Big Tymers, Eightball and MJG, and David Banner are releasing screwed and chopped versions of their albums that are sold separately and sell well. It’s like getting two CDs for the price of one.

With Slim Thug signing with Star Trak and Lil Flip continuing to gain popularity, it might only be a matter of time before the hip-hop world overall is introduced to Swishahouse. If you were already down with Texas then chances are this CD is already in your collection, but if you’re not you might want to get the jump on the rest of the country and pick this album up.