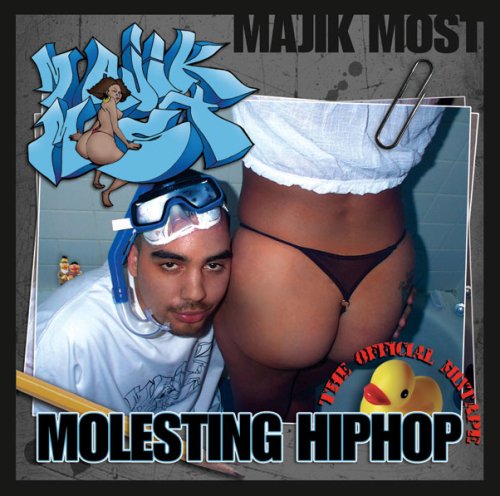 Ever since the Beatnuts went missing in action like Chuck Noris, the niche for pure, shameless, house party albums has been up for grabs like kitch on ebay. That is, until Majik Most swung into the scene with more head-strong swagger then Tommy Lee’s penis and more comic insults then Triumph the dog. But despite his arrogance, Majik Most is quite the entertainer. He fills twenty four tracks with unrelenting antics, flowing seamlessly from comedic skits to jamboree-type hip hop hits. All of which comes together like some drunken trip to Chucky Cheese.

There is something appealing about his prepubescent, A.D.D. approach to album designâ€¦something uplifting. Maybe it is the constant, comic surprises. Maybe it’s that whole don’t-give-a-fuck attitude that worked so well for Eminem. Nevertheless, Majik Most’s jovial attitude makes him an especially appealing artist. He also happens to be a quite offensive one if you couldn’t tell from the album title. He doesn’t waste time pissing people off either. In “Skinny Girls (Eat Some Food)” Majik makes fun of any girl without a Cadillac stuffed in her trunk. It’s a song sure to destroy his white female audience (were there any anyway?) but still hilarious with lines like “you hit the beach, swearing that you’re cute/ but you look like a young Asian boy in a bathing suit”. Then in his he assumes the role of a “Deranged Barber” in order to further mess with people’s heads. His lyrics stay sharply funny, even if his scissors don’t:

“You want a Majik Most logo carved in your fro?
Ah my hand slipped, now you look just like Barbedo
It’s not me bro, these scissors are messed up, rusted shut
Let me oil up these clippers
I’ll clip your neck quicker when I drink a little liquor
Might lock your ear off (scream) stop acten soft
Sit still, don’t you dare move a moff
Or you’ll look like Robocop with his helmet off.”

This type of fun, impulsive humor runs throughout the album. Most songs end or begin with a short skit, creating vaudeville hysteric. But an album full of cheap tricks would be nothing without solid musical representation, and “Molesting Hip Hop” has it. The impressive production by J-Zone, Celph Titled, and Majik Most (amongst others) lift this album out of gutter-humor and into solid hip-hop. They even utilize traditionally childish instruments such as xylophones, accordions and flutes to give the album a cohesively cartoonish sound and further augment’s Majik Most’s appeal as an immature prankster. Songs such as “Nasty Toes”, “Chicks Don’t Mind”, and “All That” are undeniably fun, whether you find Majik Most to be offensive or not. And this is what really sells the album, it’s just so fun.

Majik Most is a natural entertainer, that is for certain, but there is something about his purely theatrical approach to MC’ing that perturbs this critic. It temps me like a loose tooth. There just doesn’t seem to be anything to him when you get past the attention snatching shenanigans. He disses big names like Shug Knight and P. Diddy with the same, preemptive, shock value as 50 Cent’s “Piggy Bank”, engrossing audiences with his pure audacity. But unlike Eminem and 50 Cent, Majik Most never gives his listeners another side to his circus clown personality. Thus, his rhymes remain rather flat. This becomes a problem when Majik Most tries to turn “hardcore” on cuts like “Stick â€˜Em” and “Who What When Where”. Here, the clown-like character he has created for himself just sounds like a little kid talking tough.

Somewhere riding down highway 61 in a caravan of sleeping, steel arched carousels, giant, deconstructed tea-cup shells and cotton-stuff game prizes, is some deranged, perverted, carnival clown that was accidentally switched at birth with Majik Most. At heart, he is a class-clown, a crowd pleaser. But Majik Most’s need for attention doesn’t negate his fun, free spirit or lyrical ability. Plus, it makes for a great album. Much like sexual molestation, if you take this album too seriously you’ll go home offended and degraded, but if you just go with it you can have some fun.