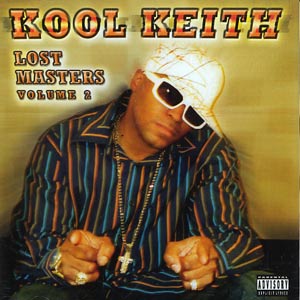 As a Kool Keith fan, I have to admit I’m getting a little bit frustrated. These days it seems like his only releases are either unauthorized bootlegs, group projects, or albums of unreleased tracks. The more of these that come and go, the better that his “Diesel Truckers” album sounds by comparison. While it was far from perfect, producer KutMasta Kurt came with slamming beats while simultaneously managing to corral the otherwise eccentric Keith into something resembling a well thought out solo album. Keith used to have no problem coming up with fat projects like “Dr. Dooom” and “Black Elvis” well after his Dr. Octagon (and even moreso his Ultramagnetic) days, but nowadays he seems more content to wax poetic about seltzer water. You almost can’t help but love him anyway. He’s like a slightly more sane, slightly less schizophrenic rap version of Wesley Willis – and unlike the latter is still alive and making music, no matter how sporadically.

Now the man who would be prince of space with or without Katamari Damacy is back again, although sadly it’s not an album of new material no matter how bizarre or esoteric that would be. Rather it’s the second in a series of “Lost Masters.” That’s really saying something for Kool Keith. Given he is a man far too happy to rap about his own urine and how sexy a giraffe’s ass is, it’s incredibly odd to think there are songs in his repertoire even HE didn’t think were worth releasing. There’s no introduction or explanation whatsoever – we jump straight from nothing into the typically self-produced mania of one of his songs, this one entitled “Move”:

“My dick rise up, in the condom with elevation
I make money, like you hustle
My way up, ride planes, bitch like you you and you
Open your fuckin package, ground delivery
FedEx, KFC bucket full of horse shit
The farm send you motherfuckers the turtles
I give you doo-doo, kidnapped with voodoo
Hold your diarrhea blast, come straight forth
Bitch, cock your ass, chocolate brown
Cover your white poodle, fuck you
Shove the bullshit playlist up your boo boo”

Rhyming is not that important to Kool Keith, and making sense even less so. That’s the tantalizing mystery of Keith Thornton. When he conciously decides to make sense he’s one of the most intimidating verbalists on the planet. When it seems like he could care less his rhymes degenerate into scatalogical nonsense that almost seems to have a point, begging you to delve in deeper to see if there’s a metaphoric analogy to KFC buckets full of horse shit. Maybe it’s a statement about the lack of values in the consumeristic culture of the United States. More realistically though, it’s just whatever the fuck he thought of the moment that he said it. On non-themed compilations of previously unreleased material, Kool Keith’s raps cover an incredibly broad range of absurdity that usually has only one commonality at all – his human waste. The more you try to discern a point, the less apparent one becomes. Songs like his short self-produced “Two Step” illustrate that sometimes the unfocused approach is actually better. When he tries to purposefully rhyme, it can actually cause whackness:

“Suede front vest, sharkskin with the slacks
with the moc’ this time
Bust a bottle, spin the top this time
How much you light up, what you cop this time
Move on your best ho, I drop this dime
Your face on the floor, I drop this time
You can’t copy, I’ll mark this mine
You think I’m sharp with pointy ears like a Klingon Mr. Spock is fine
Big as Calvin, some can’t deal with my Klein”

Keith is perfectly content to be hip-hop’s number one enigma, not caring if he has a point and caring even less if you care that he has one. At times this can actually work out well, because sometimes he actually hits the right combination of fat self-produced beats and interesting rhymes, almost by accident. Songs like “Tell ‘Em Bitch” and “I Want You to Be” almost convince you that he has it together, especially when followed by a song called “14th Song on the Album” that is in fact track 14 – either that’s a coincidence or he made one master for this release that wasn’t “Lost” in any sense of the word. Then again songs like “Keep on Jumpin” completely forget to bring in anything resembling a bassline, and Keith’s weird singing vocals on the chorus aren’t a good substitute for the lack thereof. In the end “Lost Masters 2” is just another disasterpiece for Keith, a man who may actually be one of the most brilliant rappers in the planet but who as often as not ends up sounding like a refugee from a mental clinic. There’s a method to his madness though, because those of us who are Keith’s fans seem to stick with him and buy this shit whether it’s dope or dogfood.