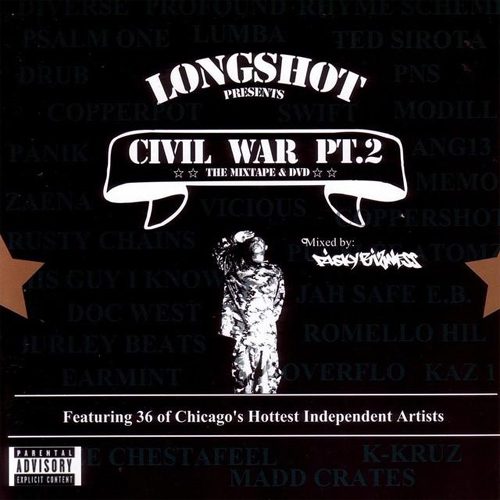 When I encounter music like this, I get a serious case of writer’s block. I’m not speaking on the quality of the music, I’ll get to that later. I just get too many fatass mixtapes or “official” mixtapes that feature twenty different artists over a span of thirty tracks. In cases like these, the only thing I can really do is say which songs are tight, which artists come off as especially nice, and the inevitable statement regarding the problems with continuity and consistency. And then I feel like I have just bored the living hell out of my readers.

This endeavor is hopefully different, because it is brought to us by Longshot, who acts as a sort of enabler for “36 of Chicago’s hottest independent artists.” That’s right, over the span of 31 tracks, he manages to incorporate 36 separate producers and emcees onto his own album. Needless to say, this isn’t really a Longshot album as much as it is a swarm of Windy City independent musicians collected somewhat randomly onto one record. The album is about seventy nine minutes long, with no breaks of any kind. The rhyme styles and production vary a bit, but over the span of such a disc, the existence of just a handful of different songs leaves far too much material with a similar sound. Short, mostly unmemorable tracks are mixed in with longer ones, so the pace is brisk, but because of the simple fact that there are 31 different beats and many featured artists makes “Civil War Part 2” feel overlong.

Still, there are things to crow about, mostly due to the production. I am only previously familiar with the Molemen producers Panik, Memo, and PNS, who all contribute, but the music is sporadically thumping and catchy. Considering the number of people involved, everyone’s donations are a little too similar, although there are moments of distinction amongst the defined loops that characterize the album. Burley does his best Pharrell impression on “Slow Down,” which works due to the energy brought by his excellent imitation. Unfortunately, at least ten tracks are fueled by lackluster music, and these points are where the album stalls. For every two-minute song with a funky loop, there is another that is overlong and undistinguished.

Because of his desire to bless so many friends, Longshot establishes no narrative consistency. He just doesn’t sound more important to the record than anyone else. The opening “Goin’ Up” makes it clear that his flow is worthy, but there just isn’t enough of him to matter. He is quite engaging when he wants to be, as on “Bang Wit’ Me.” Here, Kaz 1’s beat is a haunting bunch of synths, but before it should even be half over, it’s on to the next track. And since a large portion of the music is less than gripping, excellent tracks like this are boons that pass far too quickly and infrequently.

To his credit, Longshot is at the top of the heap on this album, consistently demonstrating more talent than his peers. Most of the artists are very proud of their macking skills, and a fair amount of them deal drugs and pack heat. Of course, the ways in which they convey these thoughts are far from creative or even intriguing. The mass of individuals helping out on the beats obviously cannot provide any sort of musical identity, and the music jumps around as noncommittally as the rhymes without breaking any ground. There is really no reason to listen extensively to this album, due to its length and lack of true bangers. A shorter Longshot album working with only a few producers would have potential, but this mixtape is too much of too little.