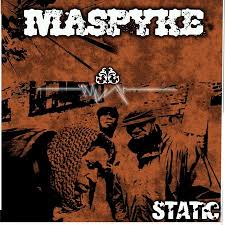 Massachusetts’s hip-hop scene has usually been restricted to the hardcore underground scene of Boston. Outside of Gangstarr and Ed O.G., most acts from Massachusetts have remained underground despite the relatively large hip-hop scene in Boston and surrounding areas. Rather than complain, acts out of MA have embraced their underground status and developed a large following. Though not from Boston, Springfield’s Maspyke carry on the underground tradition with their sophomore set, “Static.” The album is underground only in the sense not enough heads are peeping it, but the material addressed by Maspyke is as accessible and interesting as anything out right now.

Maspyke are like a throwback to the early 1990’s only in the sense that at the time hip-hop had not become the divided and over-classified genre of music it is now. Had “Static” been released then, it would have been called a hip-hop album, with no unnecessary sub-classification. Yet, today it’s billed even by Maspyke themselves as hardcore underground. I only point this out to say that fans shouldn’t be turned off by the album’s classification. Whether you consider yourself a fan of mainstream, gangsta, or underground, “Static” contains something for everyone. Roddy Rod provides the beats and keeps things interesting throughout. “Recipe” contains a pounding bass drum pattern, stuttering snares, and a dope synth line. “The Summon” builds up slowly, but once the main beat hits it’s as head-nodding as anything else on the album. “Neva Leave” may contain the album’s best production, as Roddy Rod’s synth composition and matching bass line are as catchy as anything on the radio. Roddy Rod takes a novel approach at beat making on “Bells of Winchester Square” as bells play a major part of both the beat and the melody. “Summa” also makes a run for the album’s best track as the sample, bass line, and smooth hook make for an upbeat anthem.

Tableek and H-Bomb handle the lyrical duties on the album and both hold their own throughout. “Recipe” showcases the group’s battle skills as H-Bomb and Tableek unleash a strong barrage of brags and boasts. “Nevaleave” is at the same time a cautionary street tale and a lesson in maintaining the upper hand on your enemies. “Let It Go” is a smooth tale about making relationships work despite bumps in the road. “Summa” addresses Maspyke’s home during the summertime with an interesting play on words involved. The untitled bonus track finds the group going extra deep addressing everything from the current state of hip-hop to crime and the complacency people seem to have.

Maspyke doesn’t necessarily do anything new, but they do something that is done less and less in today’s music scene. While rappers are trying to make the most hardcore gangsta music, the catchiest commercial music, or the deepest or most different underground music, the members of Maspyke are simply trying to be themselves. “Static” reflects that as the album captures the essence of what hip-hop was and always will be: a voice for America’s inner city. Just like rap’s pioneers, Maspyke maintains a perfect balance between flexing lyrical muscle and addressing both the good and the bad of their respective hoods. It’s a simple approach to rap, but one which often gets overshadowed by blatant attempts to appeal to specific fans.