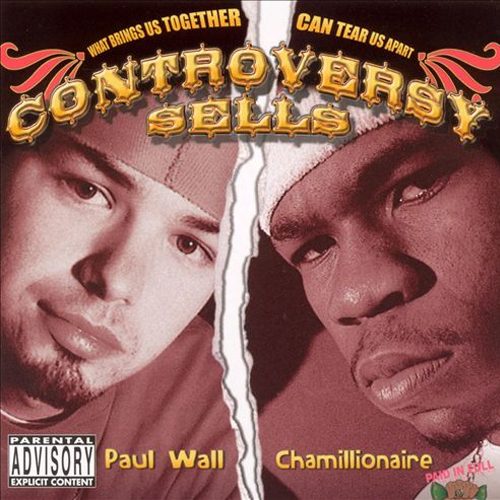 I don’t pretend to know what really happened between Paul Wall and Chamillionaire. Neither side is saying publically what happened to cause these two friends since childhood to part ways. On the other hand both have said in interviews for different publications that it’s not “beef” like you’d find between Foxy and Kim or 50 and Ja. Text messages have been exchanged, the two have said “best of luck” to each other, and they have both moved on with their seperate careers. Paul Wall released his solo debut “The People’s Champ” in September and Chamillionaire’s solo “The Sound of Revenge” is on the way. So really, it’s over, there’s no drama here… right?

Not quite. Apparently recorded and finished without Wall’s approval, the aptly titled “Controversy Sells” is the duo’s final joint effort. Released in 2005 on Paid in Full Entertainment, the album seems to be a calculated effort to cash in both on the previous popularity of “Get Ya Mind Correct” and their current success seperately as solo artists. Now let’s not get it twisted or confused here. Wall has said he hopes that Chamillionaire’s major label debut is a smash, because then people will go back and buy their other records together including this one, so obviously he’s getting paid whether he intended to do it or not. That leaves you to draw your own conclusions about what is meant by some of the skits on this album. Chamillionaire has never been shy about calling people out (as proved by 20 million diss songs towards Mike Jones) and it’s possible he and his friends just had to get some more shit out before Cham and Wall could agree to disagree peacefully:

“Then you get on the record and say, that we didn’t pay you?
Fool you could never pay me for my life! Think about that shit man
Cause I’m tellin you next time you speak on some shit like that
You gotta respect my gangsta man, if you don’t respect nothin else”

That doesn’t stop the album from having great songs by the two, even if the skit asserting that they had to be “thrown together” to create an album since Paul Wall wouldn’t finish anything is correct. The trend of dope tracks starts at the Crazy C produced “Still (N Love with My Money)”:

Chamillionaire: “She love to trick to treat
She be calling me up, Koopa let’s eat
I’m sorry, but I gotta radio interview to do
I gotta hook up with Milla Mack, and Greg Street
Maybe we can retreat, to get a bite to eat
Take a night to sneak, to a tight lil’ suite
You can invite some freaks, but get it right I’m cheap
You could leave, with tonight’s receipt”

Paul Wall: “But I still make time for my lil’ mama
But I ain’t got no time for a little drama
I’m tryna pull out in a drop top
Throw 22’s on a lil’ somethin’ foreign for the summer
You can call me but I ain’t gon’ answer
All this stress gon’ cause me cancer
I’ma call up whodi in the club
and throw a couple dollars on a freaky dancer”

There are also a lot of songs on the album that don’t feature Paul Wall at all. “Here I Am” is Chamillionaire’s brash ode to the belief that he doesn’t never a major label and fears not saying “fuck you” to them all, but won’t turn down a million dollars from one if they’re going to give it to him (obviously he didn’t). On the other hand there are songs that go out of their way to feature Wall, such as the silky smooth solo track “What Would U Do” produced by Bluenote and featuring Monetana. Still it’s dissapointing in a way that on a track as hot as “Back Up Plan” featuring Devin the Dude it’s just Chamillionaire by himself. It’s confusing what songs are really true joints between the two and what ones would have just ended up on a Chamillionaire solo album, but thanks to good beats and flows “Controversy Sells” is worth owning whether you can sort it out or not.