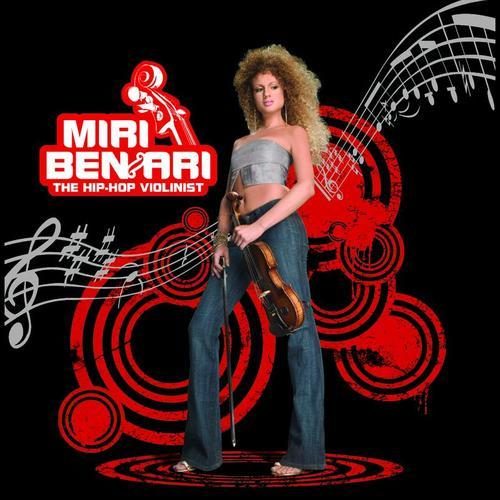 Record stores are probably having a tough time figuring out where exactly to file Miri Ben-Ari’s new album. Her first two releases “Sahara” and “Temple of Beautiful” had a small but appreciative audience among fans of this classically trained violin player. Being classically trained doesn’t mean you can’t appreciate modern forms though. The Israeli Army String Quartet and the Mannes School of Music may be where she paid her dues, but none of her peers could have guessed she’d soon be jamming on BET’s 106 & Park. If you think you’ve seen or heard it all in hip-hop get a tape of one of these performances. She stuns the crowd and viewers at home alike by faithfully recreating famous hip-hop beats with her bow; everything from Biggie to Jeru the Damaja. It was abundantly clear that this was no ordinary violin player. Hers was a classical instrument for a modern era – a symphonic string that could sing with street smarts. Everybody from Kanye West to Jay-Z to Wyclef Jean was suddenly hot to put the violinist on their tracks.

In a symphony musicians wear black to de-emphasize their own individuality and keep the focus on the music as a whole – the composer of the piece comes first. Ben-Ari couldn’t be kept in the background though. 106 & Park audiences were stunned by Ben-Ari’s music AND her beauty. Tall and frizzy haired, Ben-Ari looks more comfortable in blue jeans and Reeboks than in any kind of formal attire, but could probably rock the catwalk as well as any so-called supermodel. If basketball met classical and if hip-hop met violin, Miri Ben-Ari would be the result. Ben-Ari’s emergence onto the scene was certainly no accident though. Quiet as kept hip-hop has shown increasing love for classical music over the years. Some would say the emergence of strings and winds in rap is simply due to the fact there’s no copyright on Beethoven or Mozart and therefore no issues with sample clearance or royalties. On the other hand there’s no disputing that when the shit sounds good, keep right on doing it. Xzibit busted the door open with his use of FaurÃ©’s “Pavane” on the crossover hit “Paparazzi” and the rap world has never been the same since.

The stage has therefore been set perfectly. Hip-Hop listeners are open to mixing the OLD SCHOOL with some new age beats and rhymes. Add to that open-minded thinking a radiantly beautiful violin player who wields her instrument like DJ Premier wields a pair of Technics and you have the perfect opportunity to unleash “The Hip-Hop Violinist” on the world. An alternate title for this album would have been “Miri Ben-Ari: The Duets.” Basically the concept is fifteen tracks of Ben-Ari working with her favorite hip-hop and R&B artists; or maybe it would be fair to say that hip-hop and R&B artists are working with their favorite musician. Either way everybody contributing to the project seems to be at a high energy level. Fatman Scoop and Vicious stomp through “Jump & Spread Out” while Ben-Ari plays the hook and Baby Dooks provides an energetic pulsating beat. Akon croons on and produces the soulful “Miss Melody,” a violin-laced 2005 male answer to “Killing Me Softly.” Some of the collaborations seem so natural you’d think she’d been working with them for years – Styles P on “We Gonna Win” and Doug E. Fresh on their version of the “Star Spangled Banner” for example. Others are a complete and pleasant surprise to everyone involved – the amazing synergism of Ben-Ari with Cash Money’s Baby and Lil Wayne on “4 Flat Tires” or her soul-stirring “Sunshine to the Rain” duet with Anthony Hamilton and Scarface:

“Psychologically, I deal with demons talkin in codes
Hopefully, I’ll get to meet Jesus somewhere on this road
Sick of hearing people screaming in my head saying no
Better of if I was dead cause they killing me slow
All in all it’s just a part of my life, watching the show
Ain’t nothing never came to niggaz sleep, except for a dream
It’s like a movie with the ending credits etched in the screen”

Even when Ben-Ari gets her shine on her own, she’s still backed up by beats that keep the vibe and give the title “The Hip-Hop Violinist” credibility. That means even though you don’t see any guest rappers on “Chillin’ in the Key of E,” it’s not hard to keep right on jammin’. Miri Ben-Ari’s album showcases an incredible diversity of sound and style, made only moreso by the fact Ben-Ari seems able to adapt her unique playing gifts to any style of rap from the Dirty South to the East Coast Stomp. As much an experience as an album, “The Hip-Hop Violinist” has to be considered one of the must-own albums of the year. My only complaint is that in the end the guest artists, save for Pharoahe Monch, are a little bit mainstream. I’d really enjoy hearing what she could do if she collaborated with Ras Kass or MF Doom.