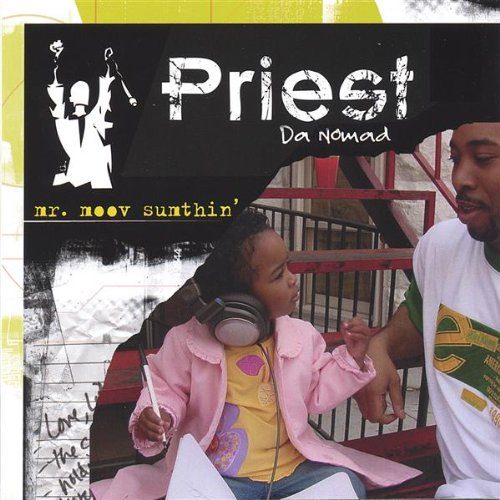 Rare is the rapper who sounds both sincere and strong-minded, honest without being mawkish, cocky yet humble. Think of it this way: how many times have you heard a rapper say they “don’t have to prove shit”? And how many of those times did the rapper actually sound like they weren’t trying to prove shit? Priest Da Nomad strikes that delicate note somewhere between humility and confidence. He’s concerned not with verbal warfare or forced statements of purpose; nah, he’s got enough shit going on in his own life to write about. I heard Jadakiss say in an interview once that most rappers’ personas and lyrics are built brick by brick on lies and exaggerations. Somebody should buy Jadakiss a copy of “Mr. Moov Sumthin’.”

Priest Da Nomad sounds exactly like Scarface crossbred with Esoteric: a little Kermit the Frog and a whole bunch of bass. His voice sells the lyrics, without a doubt: Priest has the ability to convey emotion with subtle inflections, while still keeping his flow tight and on-point. Dare I sayâ€¦he often reminds me of Tupac Shakur? Heavy words, I know, so let me justify them with this lengthy quote from the album opener:

“Imagine a street cat that give you life affirmations
Punch a nigga in his face then work with him to heal the nation
To my people on the everyday grind, poundin’ the pavement
Prayin’ that they life will meet a moment in time
Called opportunity to get out of this shit
See I want to give you more than just an album of spit
Man, I want to give you more than a hot beat to play
Knowin’ the right words can help you make it through the day
Man it’s painstaking, plus you sore
From all that George Bush government love your family’s takin’
Your mindset starts to wonder, life gotta be more
Than lines at the liquor store playin’ your tag number
Enough bills, without enough cash on ya
I know you matter even if you can’t afford that black Hummer”

Priest Da Nomad, you had me with the Bush diss.

Seriously though, Priest doesn’t take these words lightly. This album is a conscious (in the best sense of the word) attempt to fundamentally alter the artistic direction of rap music. The track quoted above is called “Blue Collar Intro,” and it nicely sets up Priest’s thesis: commercial rap music, heavily influenced by corporate demands, cripples itself by embracing a materialistic and, for most, completely unrealistic lifestyle. Who’s out there writing songs for the working man, the one who doesn’t see much hope or wealth in his future? That “Mr. Moov Sumthin'” never gets preachy is an incredible feat, and ironic, considering his name is Priest. Maybe not ironic, but you get my point.

Song after song, we’re treated to intelligent and witty lines over catchy, professional-sounding beats. But don’t get my focus on the lyrics and message wrong: the beats are great too, provided by an army of underground producers. Peep The Unknown lacing angelic choirs over spacey turntables on “What They Say,” and you’ll be sold. You could put Baby over these beats and he’d sound good. Well, tolerable. Actually probably still terrible, but with a great beat behind him. “What’s Really Going On,” also produced by The Unknown, is a shaking dancing two-step tune, featuring a quote from Priest that puts the whole melding of music and words into perspective: “What I lack in capitalism, I make up in rhythm.” Damn straight!

That’s also an example of the lyrical gold nuggets you get when you really listen to Priest, like really listen to him, man. Forgive the stoner vibe there, but I truly got a lot of joy out of following him wherever he went. “I feel left out like Ralph Nader.” “I bust through the motherfucking door with mic skills/Electrified lyrics will run up your light bill.” “Rappers talkin’ bout how they went platinum this year/That’s like Martha Stewart coming home: who the fuck cares?” That’s funny shit, yo! Funnier than anything I’ve heard 50 Cent say on a track.

Song after song, we’re treated to tender reflections, mature wisdom, and the aforementioned mic skills. The narrative thread of “blue collar rap” makes itself constantly apparent, in every leftist political aside, wisecrack, regret, and simple recollection. “The Carryout” pledges allegiance to the low income lifestyle, and gives poor people an anthem to sing with pride. “Art of Love Interlude” beatboxes, jazzes, hollers at Freud, and features some pretty good singing. No track sounds like the one before it; no beat bores; no rhyme is cheap, easy, or stupid.

Speaking of cheap, easy, and stupid, most of you have probably heard that Lil’ Kim’s “The Naked Truth” received a perfect score of five mics in The Source. I know I shouldn’t be surprised here, as The Source has pissed away every ounce of credibility it once had in a gutter labeled “Benzino,” but let’s just take that one example. I bought “The Naked Truth,” since I generally like Lil’ Kim, and it’sâ€¦eh. It’s okay. Nothing great, and certainly nothing thought-provoking or different. Did you know Lil’ Kim is gangsta? Well she is. Did you know Lil’ Kim fucks a lot of dudes? Well, she does. Oh my, alert the media.

My point is this: Priest Da Nomad is exactly right in his criticisms of the mainstream rap industry. Experimental artists are forced permanently underground, while same-ol-same-ol rappers like Lil’ Kim sell millions, and are lauded in the hip-hop press. That’s bullshit. “Mr. Moov Sumthin'” is a much better album than “The Naked Truth,” by any objective standard. Yet, have you ever heard of it until now? Listeners, speak with your wallets and support the underground. Start by getting this album. I’m sure you won’t be disappointed.