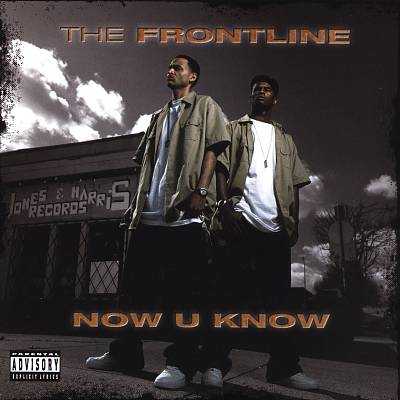 The Frontline :: Now U Know

Described in 1991 as “the city of the drug lords, pushers and the pimps” by New Orleans transplant Master P in his song “Richtown,” Richmond, CA hasn’t enjoyed much rap publicity after the Miller brothers packed their bags and headed back to Nawlins. Now in 2005, The Frontline (not to be confused with the Chicago collective Frontline previously introduced on our site) sets about putting the city back on the map, and naturally they got their own hometown anthem to go with it. “The Rich” hits with the impact of a steadily swinging wrecking ball, an image evoked by grinding guitars set to hard drums, while rappers Left and Locksmith paint a similarly gloomy picture of an environment that seems to sustain but one professional – the hustler, to whom “rap game, hoop game, dope game” have always been the “same thing,” because these three career options were seen as the “only way that niggas thought they’d make it out the Rich, mayne.”

What sets The Frontline apart from generations of gangsta rappers is that they merely observe and don’t claim to participate or having participated in illegal activities. They’re hustlin’ rappers, rather than rappin’ hustlers. This is easy to derive from the third person narratives, of which they got three, “I Know,” “Gun Cocked” and “Black Jack.” All three songs attempt to explain the motives behind the madness, the most graphic being “Gun Cocked,” where we first meet five young men ready to retaliate on their rivals, each character described in detail. Then the scenery switches and we’re in the company of five young women, similarly pictured as predators preparing to launch an attack on their prey, but their paws reach out for men’s wallets, metaphorically speaking.

It’s too bad that “Now U Know” doesn’t hold more unexpected plot twists like these. Instead, Lock and Left, the former a part-time battle rapper, the latter doubling as the group’s promising producer, find themselves in pursuit of a club hit for a substantial part of the album. “Smile 4 the Camera” follows immediately after the conceptual “Gun Cocked,” so that even dimwits will realize that the duo is dumbing things down considerably. Left’s “Stomp ‘N’ Clap” is a monotonous, mechanical back and forth mimicking Neptunes patterns, while E-A-Ski & CMT’s “Bang It!” borrows from the Lil’ Jon sound library, infusing a skeletal backbone with echoing synths. It’s when you listen to such carbon copies that you realize that Scott Storch, Timbaland, et al. are indeed the true masters of contemporary club hop. On “Now U Know,” the cookie cutter club tracks are thankfully scattered among more potent production. Left’s beat-making has its ups and downs, ranging from the banging “The Rich” and the sparsely booming, string-accented “I Know” to the bare-stripped, bleepy “That Ain’t U” and the rubbery “I Got…” “What I Can” lives up to the Bay Area tradition of dope sample-free beats, a generous bass carpet being rolled out before heavy string stabs accelerate the compelling hook: “I can only do what I can / I only am what I am / I can only see what I see / I can only be who I be.”

E-A-Ski & CMT, nothing less than legends in the production game, contribute five beats. “Intro (Who R You)” brings the orchestral, heavyset funk that made them the Bay counterpart of Dr. Dre, the title track is a top-notch throwback to mid-80s pre-sampling hip-hop, “Uh Huh” is stripped down West Coast funk with thick bottoms, while “What Is It” is an expertedly engineered, universal hip-hop track geared for this millennium’s dancefloors. Despite a few dÃ©jÃ -vus, fans of commercial, club-oriented hip-hop should definitely be pleased with this album and its ever-shifting but still streamlined structure brought forth by a relentless interaction of claps and slaps and stabs and jabs. Others might wonder why tracks whose content doesn’t even suggest club material still have to sound like such (“Uh Huh,” “What Is It,” “Let’s Go”), and why, since the latter possess more club potential than the intended club tunes, Frontline even bothered to write these obvious concessions to hip-hop’s newfound club culture, especially when they complain elsewhere: “You sold your soul, you lost your scruples / you skipped over the street, you lookin’ for loopholes / you on the radio but nobody feelin’ you / your songs are suspect, your lyrics are pitiful / the game is fake, it’s no more fairplay / but I won’t suck dick for no airplay.”

Lyrically and vocally, The Frontline make a fairly solid impression. They come across clear, they can vary their flows with voices that compliment each other well. It’s not just mere self-importance when Left brags: “Flow is heaven-sent, tracks are decadent / each rhyme clear, no speech impediments.” The structure of their raps is more stringent than is usual for Bay acts, although they’re not quite on the level of legendary rhyme wrestlers like Bad-N-Fluenz or the Hieroglyphics. It’s also impossible not to notice that The Frontline have a bigger agenda than just selling this record. The opening track sees Left putting himself “inside of the casket of a man slain / so I can write a verse in a dead friend’s name / so I can explain the train of thought of niggas caught up / and talk ’bout a black man that died for them dollars / so I can paint a picture of niggas who wanna do somethin’ grander / than sellin’ dope and doin’ 10 in the slammer.” He adds, “I’m tellin’ you, it’s life or death / and I hope that’s what our records reflect / cause when it comes down to it / I ain’t just doin’ this shit to move units / I’m here to spark a goddamn movement.”

That movement, as it turns out, is mostly dedicated to resurrecting the Bay Area, a recurring theme on “Now U Know,” last but not least on the title track, where Left claims the blueprint for the entire indie rap game for the Bay. Needless to say, he’s got a point. Whether The Frontline will succeed in establishing what they call the New Bay, remains to be seen. At this point, they deserve respect for recognizing what the problem is and for doing something about it: “You gotta think bigger than your local region / that’s why we hurtin’ right now and barely breathin’.”